Meanwhile, Not Exactly AT the Ranch

You may recall the Bag Lady talking about moving the cattle to different pasture the other day. She thought she'd take you along on the cattle move today. The cattle were brought over in the stock trailer, and put in the corral until the last load arrived. Then they were let out of the corral: 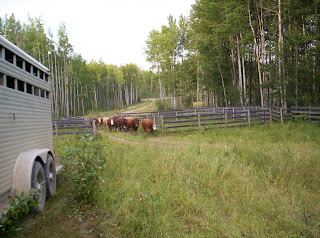 They headed off on the run: 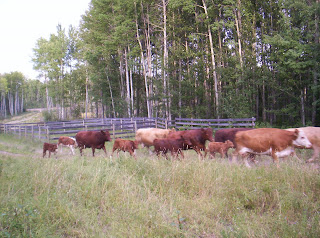 Most of the cattle had not been to this particular pasture before, but the older cows are well-acquainted with it. The younger cows' excitement was infectious, though, and even the old cows were running! 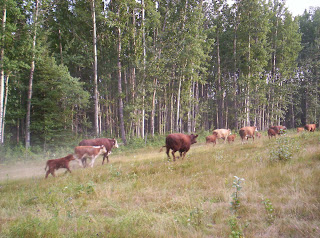 They had to stop at the far end of the small pasture, so one of the old girls took time out for a dirt bath: 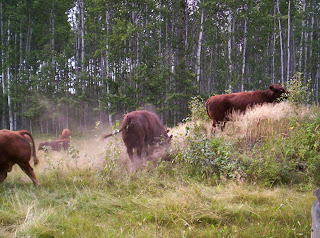 And then got into a little tussle with one of the other cows: 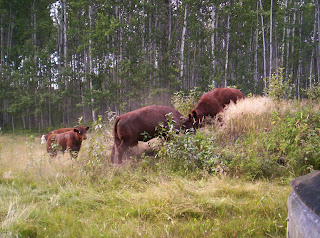 By the time the Rancher opened the far gate and let them out onto the big pasture, they had settled down: 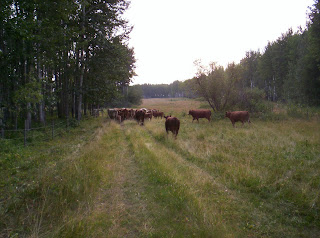 The cows will stay here until the snow flies (or the water runs out, whichever happens first!)

The Bag Lady has been enjoying some pretty sunrises in the past few days (probably due to the smoke from forest fires burning to the west of her) and thought she would share one of them with you. This was yesterday morning: 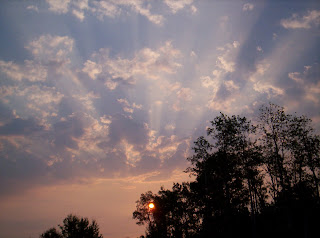 Hope you enjoyed moving the cows with us!
Posted by the Bag Lady at 12:01 AM

Stony is so jealous! Cows that run are so much more enjoyable than cows that just stroll along. (Of course, he hasn't gotten close to either kind since he became my dog, but Some Day I promised him some cows.)

that last photo is so beautiful.

frames for it please.

then let us vote on which frame to choose :)

The rays reaching out across the clouds makes for a lovely picture.

Reminds me of watching cows at my grandfather's farm many years ago.

My brother accidentally wandered between a cow and calf once, he was around 5 years old and did not even realize he had done it. The speed with which the mama came at him, and Papa intervened, awed me then, and you have reminded me of that long ago incident.

Beautiful sunrise, too. Around here, too many wires in the way. Ranching does seem to have many compensations for the hard work it costs.

Beautiful sunrise pic. There's something about excited cows that puts a smile on my face.

The cows are an udder delight.. as is that sunrise pic. I love the rays. Another beauty, Baggie. :)

I second Mizfit! That last pic is just stunning. When's the next photo contest for the BL??

Wow...I always find running cows cute and funny at the same time...not graceful, but so excited that they make me grin.

I really like the little peeks into the ranch life. It's like being ghtere, only we don't have to do any of the work :P

It's funny to see the cows so excited, but it looks like there's a lot of good grass in that pasture, and who doesn't enjoy a change of scenery?

In the fall we start to have some lovely sunrises too. I missed a lot of them when I'd stay at Chris's house in the shitty. I'm starting to see more and more good reasons to that relationship being over.

Great pics today. Love that the young ones got the old cows revved up. Proves there is hope for us old gals, just need a young 'un.

You caught up on sleep yet? Me neither.

Thanks, everyone, for your comments. The Bag Lady is feeling poorly today and thinks she needs to go lie down. Except that when she does, it makes the congestion worse.

Aww they're so cute! Having a little tussle in the dirt. Kinda want to join in the fun...

PS I hope you're feeling better!

I totally enjoyed that. Of course it may be the fact that all I had to do was watch. No work involved. :)