Travelling down the Jasper-Banff parkway: 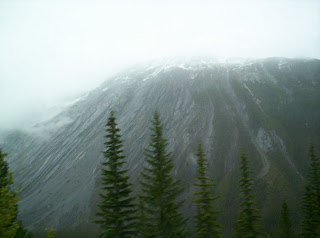 It was cloudy and rainy for the entire trip, which was unfortunate for the Rancher - he's never driven through the mountains in that direction.

Here is a photo of the Columbia Icefields. The glacier has noticeably receded in the half century since I was a child. 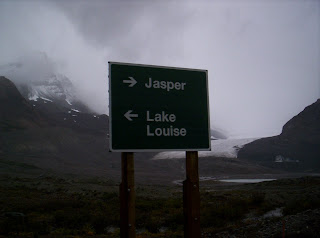 There was still gorgeous scenery to behold: 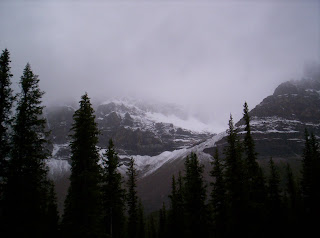 Home Is the Wanderer

The Bag Lady and the Rancher are home from their travels. They enjoyed themselves immensely and are tired. Very tired.

The Bag Lady has to go back to work today, so this will be a short little post. She and the Rancher put on a lot of miles during their vacation, and saw a lot of country. A lot of rainy mountains, streams, clouds, trees, rain, more mountains, more rain, more clouds, more trees, lakes, rivers, hills, fields of corn, wheat and assorted grains, and some sun. Did she mention rain?

She took about a gazillion pictures, and will share some of them with you when she has sorted through them. In the meantime, here is the entrance into Radium Hot Springs, which is in British Columbia. 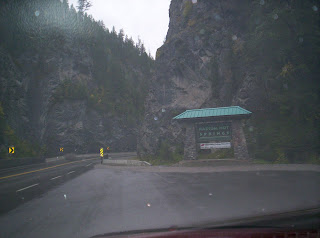 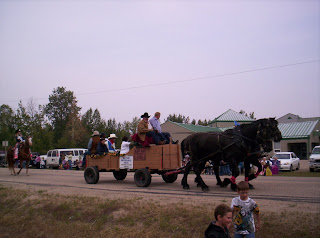 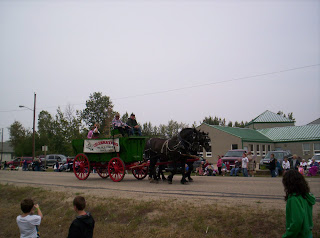 Photo-finish Friday is the brain child of Leah, at the Goat's Lunch Pail.
Posted by the Bag Lady at 8:04 AM 16 comments:

What Day is it? Thursday??

Where did the week go?

The Bag Lady has been very busy this week, what with the garden, the cows, appointments in town, the housework, the garden, working, ranching..... did she mention the garden? The weather has been chilly, and frost has been forecast several nights, so she has been covering things in her garden so they didn't freeze, only to have the temperatures stay just above freezing. Then everything needs to be uncovered again during the day, only to have it threaten to freeze again..... it's been a vicious circle. She hasn't dared NOT cover things, either, because the one night she didn't would absolutely be the one that it actually did freeze!

She has a large box of tomatoes ripening on her counter. She has canned some already, and is hoping that there will be enough ripe either today or tomorrow to make some of her salsa for canning.

What with working and appointments scheduled every day, it seems, she's scarcely had time to sit down at home (and she rarely sits down at work...). She had to take her little truck in to the shop for a recall appointment on the cruise control. She's glad she finally got around to it because now she won't be afraid to use the cruise! Apparently, there was a slight risk that it would burst into flames or something, so she hasn't been using the cruise control (rather than take the time to make the damned appointment, which she thought would take forever, but actually didn't, and she ran into an old friend when she was there, so they had a nice visit!).

She may not be posting much for the next couple of weeks because she is going to be really, really busy driving, looking at scenery, taking a gazillion pictures, eating out and enjoying all manner of different things with her nose hard to the grindstone of her first vacation in 15 years!
Ida-who? Idaho, that's who. (Anyone out there reading this from Idaho? Look out.... the Bag Lady is a-coming your way!) But before she can leave, she has to deal with more garden produce. There are still beans that need to be picked, and the brussels sprouts that she is so looking forward to, as well as more broccoli and a few zucchini. And that lovely cabbage. (Please, powers-that-be, don't let it have worms.....!!!)
Posted by the Bag Lady at 7:54 AM 16 comments:

Harvest Time in the Garden

The weather has been rather cold and damp around the ranch for the past few days, but that didn't stop the Rancher and the Bag Lady from doing what had to be done.

They (well, the Rancher) put the finishing touches on the corral in order to round up the cows to bring them off summer pasture. It has been such a dry summer that there isn't a lot of grass anywhere, but there definitely wasn't anything for them to eat where they were. So Sunday was spent hauling them off the pasture, and taking them to a different place. Because of the lack of grass everywhere, the Rancher decided to split the herd up. Some went to the hayfield, now that the bales have been hauled home, and the rest came home.

The Bag Lady picked all of her tomatoes last weekend, and quite a few of them are ripe now, so she will be doing some canning today. There is nothing quite like being able to open a jar of home-grown tomatoes in the middle of winter and enjoying again the taste of summer!

There will soon be enough brussels sprouts for a feed, which the Bag Lady is really looking forwad to. She has never grown any type of brassica before, and this year she was pleased with the results of her experiment. She grew broccoli, which was delicious, and planted cauliflower, which did not produce, sadly. The brussels sprouts did fairly well, as did one cabbage plant. There is another small cabbage coming along, but there is the threat of frost quite frequently, now, so the Bag Lady is afraid it may not mature. Unfortunately, the purple cabbage did not produce and attracted worms, so the Bag Lady pulled the plants out.

She also has two zucchini plants which have produced plenty of zucchini..... and are still producing! That will only stop after it freezes, or the Bag Lady pulls the plants out of the ground. There is also enough dill in the Bag Lady's garden to pickle the universe, but she promises she won't. Really.
Posted by the Bag Lady at 7:32 AM 17 comments: 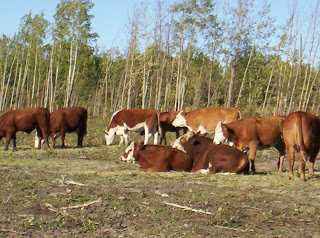 Photo Finish Friday is the brainchild of Leah, at the Goat's Lunch Pail.
Posted by the Bag Lady at 7:47 AM 12 comments: