The Bag Lady has returned from her sojourn to the east. She went on a business trip to Lincolnshire, Illinois, which is a hop, skip and jump from Chicago, so naturally, she had to see the city!

Her first view of the city was out the incredibly tiny window of the airplane as it banked for the approach into O'Hare airport. 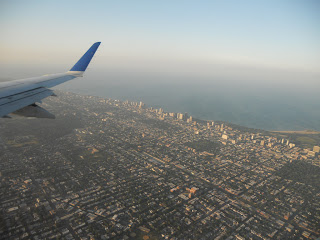 After landing and getting settled into her hotel, she made arrangements with a fellow conference attendee to travel into Chicago the following day.
Bright and early the next day (well, okay, 8:30 or so, which is not all that early as far as the Bag Lady is concerned, but....) she and her traveling companion made their way by taxi to the nearest train station. 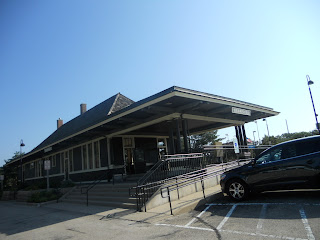 After an hour or so on the train, they arrived at Union Station. 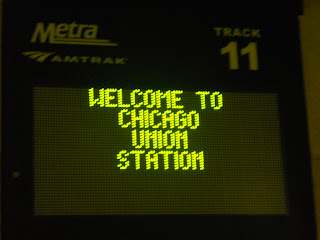 They made their way on foot across the canal... 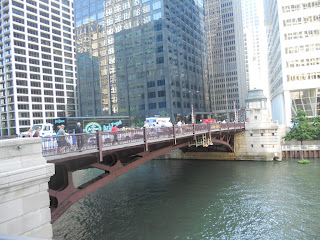 And the cowardly, chicken-hearted Bag Lady remained with her feet planted firmly on the ground while her companion rode up to the (glass-floored!!) observation deck of the Willis Tower (previously the Sears Tower). 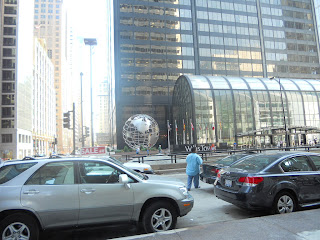 They then proceeded to stroll (at a rapid pace) to Michigan Avenue, known also as the Magnificent Mile. The Bag Lady snapped a few photos along the way, including this one of the Chicago Board of Trade building.... 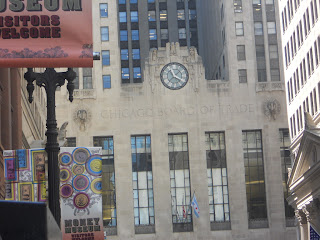 The woman the Bag Lady was traveling with (tagging along after?) had an agenda, and the next stop was the Art Institute of Chicago. 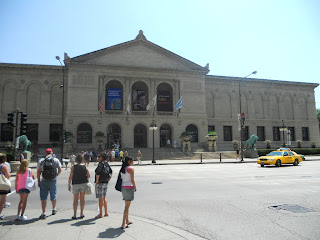 They spent a lovely hour perusing the art displayed therein (and enjoying the air conditioning) before they continued along the Magnificent Mile.

It was an incredibly hot day (101F, the hottest day of their visit), and the travelers stopped several times along the way to cool off in some of the shops they passed. But the Bag Lady's traveling companion had an agenda and was not to be deterred (American Girl - MUST have doll! Coach - MUST have purse! Another Coach outlet to pick up matching wallet! Must NOT stop and rest, or eat, or chat with the locals! Although the Bag Lady did insist on finding a souvenir shop in order to buy the Rancher a ball cap. She promised! And she is an equal-opportunity tourist - she bought him one of each from both the Cubs and the Sox.)

The Bag Lady was wearing an extremely comfortable pair of sandals, but still developed blisters on the soles of her feet! She and her companion the Dragon Lady finally reached their objective (well, the Bag Lady's objective - the only other thing she insisted upon seeing)......... 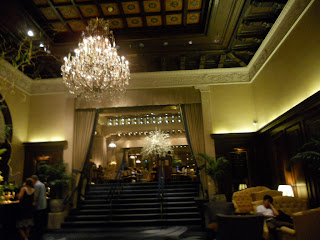 From the Drake, they took a taxi back to Union Station and caught the train back to their hotel in plenty of time for the Bag Lady's traveling companion to attend a dinner that evening. (The Bag Lady, on the other hand, collapsed in her room with her feet on a bag of ice!)
Posted by the Bag Lady at 6:49 AM 14 comments:

The Bag Lady is going on a journey!

The weather continues to be cool and wet, and the Bag Lady fears it may be quite awhile yet before there will be any evenings of sitting around the fire roasting marshmallows! 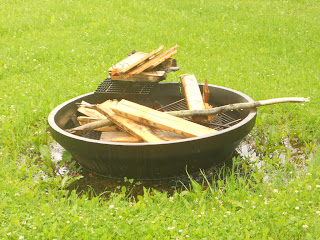 CherylK, over at Lake Mary Musings recently posted a picture of the firepit they built using large rocks at her home, and the Bag Lady made a comment about using old gravel-crushing cones around here as firepits. Cheryl wasn't sure what gravel-crushing cones were, so here is a picture of one. (This is actually the firepit that the Bag Lady and her nephew built for her mother-in-law - the Bag Lady's own firepit is under even more water than this one!)

Photo-Finish Friday is the brainchild of Leah at the Goat's Lunch Pail.
Posted by the Bag Lady at 5:46 AM 8 comments:

A River Runs Through It.

(Warning - long post ahead, with many pictures. Grab a coffee! Oh, and take a pee first, especially if the sight of water makes you want to make some water of your own....)

It's been raining in the Bag Lady's neck of the woods.

She and the Rancher knew they were under a heavy rainfall advisory, but on Thursday they decided to go camping for the night, regardless. They tucked their trailer into their customary camping spot and lit a little fire, roasted a wiener and enjoyed the company of a couple of friends. It rained for a few minutes, but it stopped and was quite a pleasant evening.

Sometime during the night, it started to rain.
And it rained. Hard.

When the Bag Lady got up in the morning, she looked outside and was a little surprised to see just how much it had rained. And just how much water had collected in the spot where a mere 6 or 7 hours earlier she had been enjoying a nice fire..... (click on any of the images to enlarge) 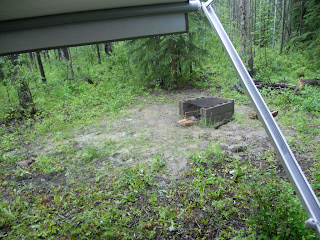 One of their friends arrived in time for breakfast, and it was decided that they had better pull out, mostly because it was still raining hard, and there was more water collecting in their campsite.
While the Bag Lady cleaned up after breakfast and stowed things away in the trailer, the Rancher, with the help of their friend, tore down camp. 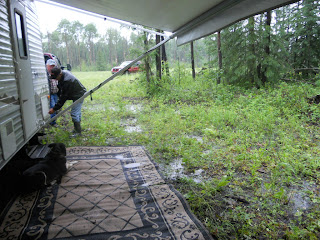 It was touch and go, but the Rancher managed to coax the trailer out of the hole they call their campsite and they headed for home (where their rain gauge was registering 1 inch)

It continued to rain the entire weekend. The rivers rose and overflowed their banks. The Bag Lady went out to check cows yesterday morning (in the rain) and had to contend with this... 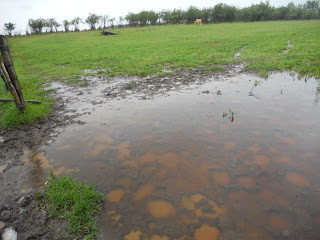 Fortunately, she was wearing these..... 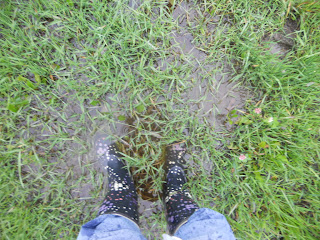 Sadly, she thinks her garden is not going to produce much this year (why, oh why didn't she plant rice?) 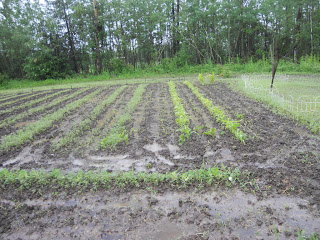 They heard reports that the big river between their ranch and the nearest town was starting to overflow it's banks, so they went for a little drive.
The river apparently crested overnight, but it was still very high.... (it is usually on the other side of that little tree out in the water) 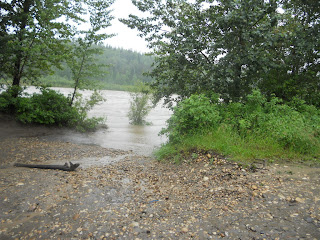 As were several other ordinarily small streams in the area. This is Bald Mountain Creek... 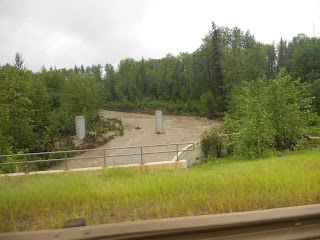 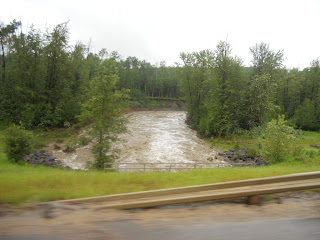 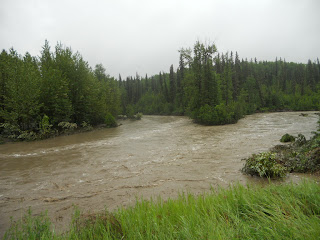 It is still raining. The rain gauge is reading 4 1/2 inches (over 3 days).
The drought this area has been experiencing for the last several years appears to be over.
Whew.
Posted by the Bag Lady at 12:01 AM 10 comments:

The Bag Lady thought she would share some random photos she has taken around the ranch lately.

Peonies about to bloom in her flowerbed.... 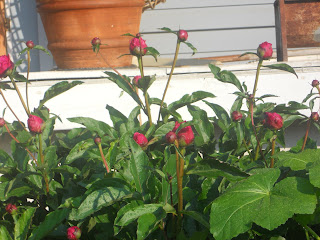 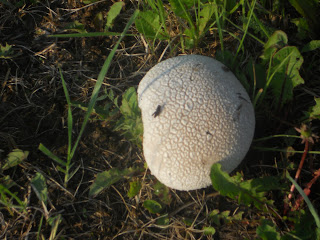 A poppy blooming in her flowerbed.... 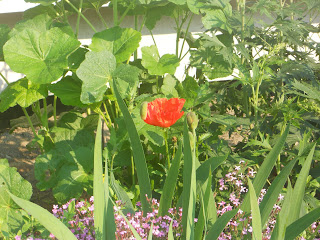 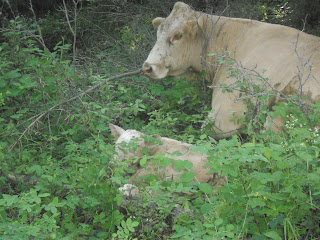 Lastly, a baby Evening Grosbeak hanging out on the deck railing. He was eating sunflower seeds that had fallen from the feeder just above where he was perched. He kept craning his neck to look down at the ground. He finally hopped halfway down the railing going down by the stairs, then launched himself into a free-fall to the ground!

Hope everyone has a wonderful and safe long weekend!
Posted by the Bag Lady at 6:03 AM 7 comments: