The Bag Lady and her co-conspirator have been hard at work at their unpaid, volunteer jobs as curator and assistant curator of the little museum in their community.

Along with mountains of paperwork, they have been cleaning and restoring donated items, preparing them for display.

One of the items donated is a wood-burning cookstove. If any of you ever decide you are nostalgic for the "old days", go out and find a wood-burning cookstove and clean it. The Bag Lady guarantees that will cure you of your longing for the good ol' days. (And if it doesn't, fire it up and try cooking with it, especially in the summer. That should definitely work.)

The Bag Lady took a few pictures of the process to share with you. They removed the top pieces of the stove after scrubbing them (with rust remover, wire brushes, steel wool pads and elbow grease). Then they shovelled ashes out of the fire box, and scraped and vacuumed soot, ash and grease from every interior surface.


With the top burners removed, you can see the firebox (foreground), the top of the oven and the opening for the water reservoir. Everything was coated with ash, soot, carbon and grease. The stove had been in a storage shed for many years and the water reservoir was full of leaves, dirt and the jawbone of a small creature! 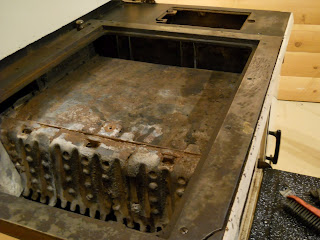 The interior of the oven after a layer of soot and grease was removed to reveal a speckled enamel surface: 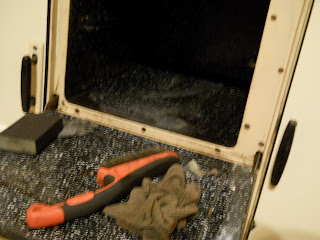 The Bag Lady painted the burners and top surface of the stove with a special paint for heated surfaces. 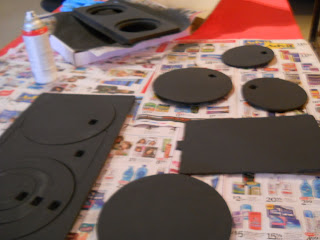 Here is the re-assembled stove, all shiny and clean. All that remains to be done is a light coat of wax on the cooking surface. 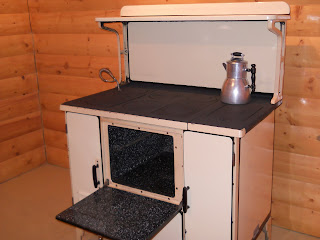 (The stove is a McClary Royal Jubliee, and the Bag Lady is in the process of researching to try to find out when it was manufactured.... which is part of her job as curator.)
Posted by the Bag Lady at 9:57 AM 16 comments:

It's been two weeks since the Bag Lady posted anything?? What a slacker!

Actually, it's because she hasn't had anything very interesting going on in her life. It's been an endless round of laundry, "NCIS", housework, "Criminal Minds", ranch work, "The Mentalist", cooking "Person of Interest", and baking. Chopping wood, feeding the woodstove, taking care of cows and horses and dog and cat and husband.... (Did you know that you can spend almost the entire day, every day, watching re-runs of your favourite shows just by flipping back and forth between Showcase (East and West), Showcase Diva and A&E? For someone who hadn't watch TV for the last 10 or so years, the Bag Lady has quickly become addicted!)... paperwork and taxes and working at the fledgling museum in her little community (did she tell you she volunteered to be the curator? She has since stopped drinking.).

Did she mention baking? A (slightly older) neighbour was rhapsodizing a month or so ago about something his mother used to make when he was young. His heritage was German Mennonite, and his mother was apparently a fabulous cook. He mentioned many dishes she used to make, but the one he missed the most and loved the best was something called Bubbat.

The Bag Lady was intrigued by his description of this dish, so she did some research on the internet and found several recipes. None of them were exactly as he described, but she decided to adapt one of them to his description. She wanted to do a test-run before making the dish for her neighbour, so the Rancher came home from work the other day to this: 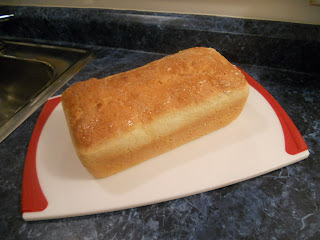 Which, when sliced open, revealed this: 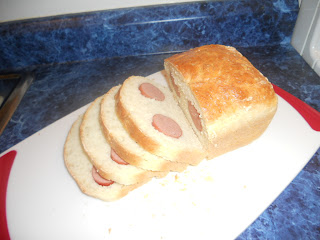 The Bag Lady has a special fondness for things with little surprises in them (thanks, Mom! Did anyone else's mother ever bake birthday cakes with pennies in them?) Her neighbour described Bubbat as a cakey bread with a sausage laid in it so that when it was sliced, everyone got a piece of sausage. She served it with Borscht and he and his siblings would drink a gallon or so of milk with it. The Bag Lady didn't have any Borscht, but she did have homemade split pea soup, which worked well.

She found the recipe here, and encourages you to go check it out - there are some fabulous recipes on this blog!
Posted by the Bag Lady at 7:42 AM 15 comments: