Meanwhile, Back at the Ranch

Calving season is winding down around the ranch. There are a few more calves yet to be born, and the Bag Lady hopes the stragglers finish up soon.

This little heifer came along on the weekend... 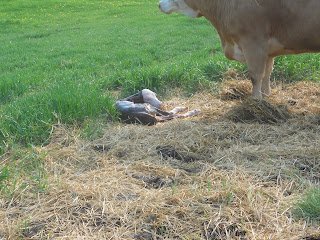 It was a beautiful, warm, sunny evening and she was up and running around in no time.

The Bag Lady's garden is almost all planted, except for a few bedding plants she would like to add. She hopes to check out some greenhouses soon to find some plants that have already been started, and a few flowers to put in pots on her deck.

She and the Rancher planted 75 hills of potatoes, so with luck, they will at least have meat and potatoes to carry them through the winter!
Posted by the Bag Lady at 6:29 AM 11 comments:

Email ThisBlogThis!Share to TwitterShare to FacebookShare to Pinterest
Labels: calving

Tale of a Tree 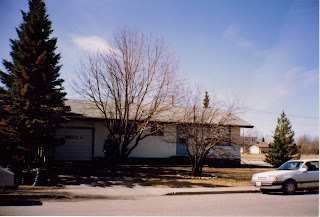 When the Bag Lady lived in her little house with the very big tree in a different city long, long ago, she tried to keep the tree trimmed and under control. As time passed, the tree did what trees will do, and it grew and grew.

The Bag Lady eventually sold her little house in that different city because she had moved to the country, but she occasionally drives into that city, and one day she happened to have business in the neighbourhood where her little house was, so she drove past her little house just to see how her tree was faring.

Her tree was gone!

She carried on to her destination, pain in her heart, mourning the loss of her beautiful roof wrecking tree. She had always known that the tree would eventually have to be cut down, but she had hoped that the current owners would just move their damned house away from her tree it wouldn't happen for many years to come.

When she had finished her business in the neighbourhood, she drove back past her little house with the non-existent tree and saw that there was now a vehicle in the driveway. She also noticed that there were suckers growing around the stump of the once magnificent tree, so, on a whim, she stopped. She rang the doorbell of her little house (she doesn't care, it will always be her little house, even though, if she were carried into it unconscious and woke up, she wouldn't know she was in her little house because of the extensive and wonderful renovations they have done!) and asked the current owners if it would be alright if she took a couple of cuttings from the tree.

The current owners were very gracious and gave the Bag Lady a tour of the house to show her all the renovations ("You moved the basement stairs! I always wanted to do that".... "A bathroom in the basement? I wanted to do that, too!" .... "Oh.My.God!! I LOVE that you turned the garage into a family room. That was one of my dreams....") and even loaned her a pair of scissors to take her cuttings from the tree. 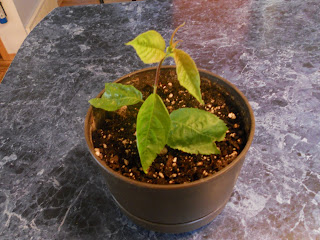 She sincerely hopes the cuttings will take root and that eventually she will have a beautiful tree in her yard in the country. In the middle of her yard, where the tree can grow and grow and spread out like nature intended!
Posted by the Bag Lady at 7:53 AM 17 comments:

... this is what the Bag Lady was looking at! 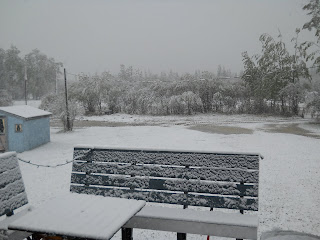 She is happy to report that this long weekend, the weather is looking much better. The forecast is for some thunderstorms, perhaps, and maybe even some much-needed rain, but the temperature is supposed to remain in the low 20's, which suits the Bag Lady very well. She is hoping to get her garden in before it rains..... if it rains.

The generosity of people never ceases to amaze the Bag Lady.

Some of you may have heard about the wild firestorm that hit the community of Slave Lake in Alberta, wiping out half the town this past Sunday.

Although not affected personally, the Bag Lady has been paying attention as events unfold (the Rancher has a nephew who lived in the little town, and he and his young son are safe, but probably homeless).

The Bag Lady ran across this blog this morning and is so proud of her fellow Albertans, she had tears in her eyes when she read that so many people have donated things, many of the collection sites are asking that people hold on for a few days until they can get what has already been donated sorted out! That overwhelming response was from a single day!

The Bag Lady hopes that it helps those displaced people to know that so many people are willing to help.
Posted by the Bag Lady at 8:07 AM 9 comments:

Email ThisBlogThis!Share to TwitterShare to FacebookShare to Pinterest
Labels: http://www.blogger.com/img/blank.gif

Here is a photo of a moose and her calf that the Bag Lady spied when she was out checking cows yesterday morning. The photo is not the best because the Bag Lady is fully aware of just how protective mama moose are when it comes to their calves (well that, and the fact that the moose were in the swamp on the other side of the dugout, so this was about as close as the Bag Lady could get without swimming.... and she is not a proficient swimmer!)
(You may want to click on the photo to enlarge - might be easier to spot them that way) 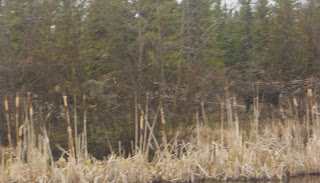 And, if you had trouble seeing them in that picture, this one might help. This is the mama alone. 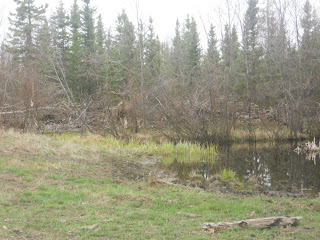 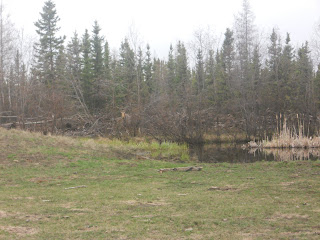 Have a great weekend!
Photo Finish Friday is the brainchild of Leah, who blogs over at the Goat's Lunch Pail.
Posted by the Bag Lady at 1:11 PM 8 comments:

More babies have been born on the ranch (the Bag Lady may have missed posting a few pictures, but really, how many calves do you wanna look at?)

Remember the cow that abandoned her calf last year? This time around, she won't let anyone near her baby! Including the other calves. The Bag Lady had to sneak up on her to take this picture. 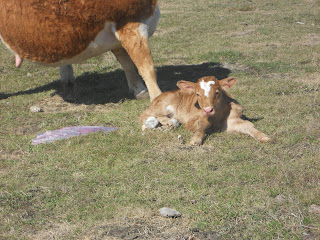 (Does anyone else think the white mark on that calf's head resembles a bird?) 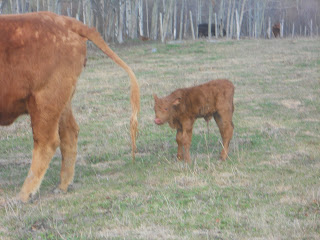 The Bag Lady can hardly wait to start planting her garden. Her garden is the last place in the yard where the snow melts, so it's still on the wet side. The Rancher was going to disc it for her a few days ago, but it was too soft. Soon, she hopes.
Posted by the Bag Lady at 6:58 AM 9 comments:

Email ThisBlogThis!Share to TwitterShare to FacebookShare to Pinterest
Labels: calves 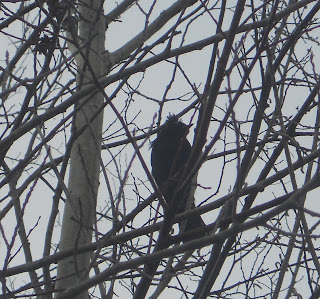 This is a Steller's Jay.

(Honest, the Bag Lady knows the picture isn't very clear, but that's really what this bird is.)

He is not supposed to be in the Bag Lady's neighbourhood. According to the bird books, he is supposed to be somewhere in the mountains down around Waterton Lakes National Park. About 800 kms away.
It's been really, really windy lately.....
Posted by the Bag Lady at 6:25 AM 13 comments:

The Bag Lady has been neglecting her blog out of sheer lack of having anything amusing, interesting or remotely intelligent to say! playing Scorpion Solitaire on facebook destroys brain cells!

It's that time of year on the ranch when there isn't much going on. There's been a lull in calving, it's too wet and cool to do anything in the garden, and the Bag Lady is pretty sure you don't really want to hear her lousy solitaire scores about washing windows and chasing down and assassinating the enormous spiders that have suddenly tried invading her home! Well, okay, maybe not enormous.... but the Bag Lady doesn't like spiders, so any spider appears huge to her!

The snow is almost completely gone from her neighbourhood, except for a few piles in the shaded areas, and the large pile that the Rancher plowed off one spot out in the pasture as a feeding/calving area. The cows are sick to death of eating hay, so spend a good portion of every day standing over a blade of grass, waiting for it to grow high enough that they can chew it off. The calves are adorable, as always, running and jumping and discovering all kinds of ways to torment their mothers and amuse themselves with mock bull fights. It makes the Bag Lady smile every time she sees them put their tails high up over their backs and take off running at top speed, their poor mothers lumbering along behind, bawling their disapproval, bags swaying back and forth (hmmm.... sports bras for cows? Wonder how that would sell...)

If anything exceptional happens, the Bag Lady will be sure to let you know, if anyone ever comes back for a visit. In the meantime, if anyone is looking for her, a good place to try would be facebook, wasting time outside, weeding the flowerbed. (really)
Posted by the Bag Lady at 7:33 AM 18 comments: