Some time ago, Hilary, over at the Smitten Image, held a giveaway on her blog. The Bag Lady earned a chance to enter simply by making a comment.
Imagine the Bag Lady's surprise when she received an email from Hilary telling her that she had won a gift certificate from CSN stores!
The Bag Lady spent much time browsing through the enormous variety of things available on the CSN website. She finally settled on this: 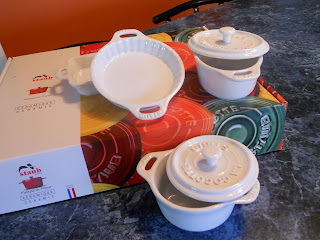 Thank you, Hilary, for holding the giveaway, and thanks to CSN stores for supplying the gift certificate!
Posted by the Bag Lady at 6:43 AM 16 comments:

(oops. The Bag Lady wasn't done complaining in this post, but hit some wrong key and it published itself!)

The Bag Lady hasn't had much to share with you lately. She's been peeking in here and there, but since Hotmail and Google joined forces, it has created a bit of an identity crisis for her. She blogs in her Hotmail account but does business in her Google account, so invariably she is in the wrong account when she takes a few minutes to visit blogs. Consequently, she doesn't leave comments because no-one would know who she was. She's sure there's probably a way to fix this problem, but hasn't taken the time to investigate thoroughly. She admits she is a little miffed about this situation because it has complicated her life rather than simplifying it. But she finds that is the case with most "improvements" in the world.

Take laundry detergent. "New and Improved!" generally means your clothes are not going to come as clean as they once did. "Phosphate-free" guarantees they won't! The Bag Lady knows that phosphates are public enemy number one, but they certainly helped get grease stains out of clothes. Sadly, they were apparently destroying the environment, so they had to go.

Eye make-up remover is another thing that has annoyed her lately. The Bag Lady doesn't wear a lot of make-up (you can't make a silk purse from a sow's ear, as her mother used to say) but she does wear mascara most of the time. She has stubby little light-coloured eyelashes, and without mascara, she looks ...... scary. She has to wear water-proof mascara because that's the only kind that doesn't end up floating down her face to her chin by days end. For years, she used an eye make-up remover that worked wonders - took the mascara off, was gentle and didn't leave a greasy residue to gum up her contact lenses. She can't find that brand anymore, and has been experimenting with all the "new" and "improved" brands. Sigh. Not one of them will take the mascara off, and at least one of them was so oily, she had to use industrial-strength (but phosphate-free) cleanser to remove the oily residue!
Posted by the Bag Lady at 6:06 AM 13 comments:

The Bag Lady participated in a trade show last evening. It was bitterly cold, so the attendance was low, but it was fun regardless. She entered her name in a draw at one of the booths, and was pleasantly surprised when she won! She is absolutely positive that a lighted cocktail glass will come in extremely handy some night. It has three settings - constant, pulsating and disco! She can hardly wait for the weather to warm up and the snow to melt so she can party 'round the campfire. She will, of course, also serve guacamole dip, made with her other free prize! 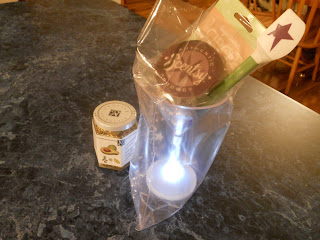 Photo-Finish Friday is the brainchild of Leah, at the Goat's Lunch Pail.
Posted by the Bag Lady at 5:26 AM 19 comments:

The Rancher and the Bag Lady took some steers to the abattoir yesterday. They were surprised at the lack of snow on the fields in the area, which is roughly an hour's drive north from the ranch. It was almost as though spring had arrived in that part of the country.

This was the parking lot at the meat shop. 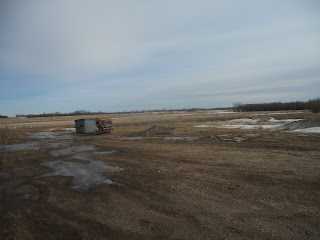 This was the field across the road. 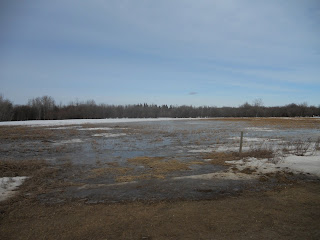 This was the official greeter at the door! 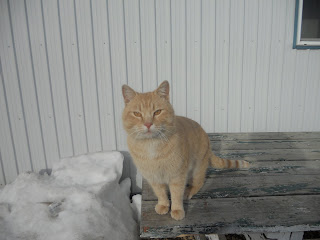 You see the pile of snow beside the table? That is what the Bag Lady's entire yard looks like! But that was practically the only snow around the meat shop, and it was just piled up there from being shovelled off the walk!

It has been mild in the Bag Lady's area, too, but definitely not to the same extent. And the forecast is for nasty weather today - the Bag Lady is afraid to look outside, because the weather was changing last night, with a cold wind blowing, and she is determinedly doing the "ostrich". ("If I can't see it, it isn't there!")
Posted by the Bag Lady at 12:01 AM 16 comments:

This is what the Bag Lady was taking pictures of 6 months ago.... 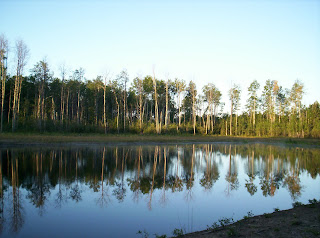 A sight for snow-weary eyes.

Photo Finish Friday is the brainchild of Leah, over at the Goat's Lunch Pail.
Posted by the Bag Lady at 5:55 AM 12 comments:

The Bag Lady has a project.

She has actually had this project on the go for many years, but she got distracted from it's completion by tucking it away in a closet and promptly forgetting about it for 3 or 4 years and only recently started working on it again.
Of course, her decorating scheme has changed in the years since she started, but, at the rate she's going, by the time she actually finishes the rug, she may very well have come full circle with her colour scheme! 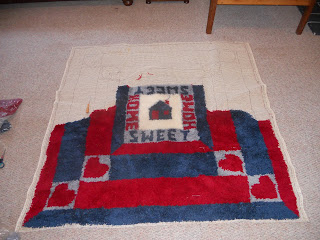 Is anyone else out there crazy about rug hooking (or crazy enough to try hooking a 4 ft x 5 ft rug)?
Posted by the Bag Lady at 12:01 AM 24 comments: 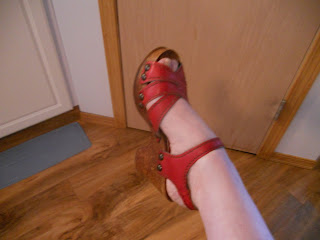 Mary Anne over at Living with the Sun has been on a bit of a "kick", sharing feet, which inspired the Bag Lady to share a foot of her own.

These are the Bag Lady's absolutely most favourite shoes in the world, that she purchased many, many years ago when the world was still thought to be flat on a trip to Europe.

Mary Anne's take on feet is slightly different - go have a look!

(Photo Finish Friday is the brainchild of Leah, over at the Goat's Lunch Pail, who just returned from a vacation in Egypt and has a few things to say about that!)
Posted by the Bag Lady at 12:01 AM 11 comments: