The Bag Lady has been ignoring her blog a little - she has no real excuse except to say that she's been a little busy (or lazy, take your pick.)

She hopes everyone had a lovely holiday, whether you celebrate Christmas or something else. The controversy over whether to wish people Merry Christmas has been annoying her a little this season. A man in Saskatchewan created a tempest over the "Merry Christmas" greeting displayed on buses in Saskatoon. The Bag Lady thinks he just wanted to get his name in the news, but wonders how many people actually think it's a valid argument. He says that municipal taxes should not pay for the greeting. Says that he is an atheist and does not believe in Christmas, and also that other holidays belonging to other faiths should be given equal time.

The Bag Lady has given this much thought. Her response to this man goes something like this:

If you take into account the fact that the majority of the people who settled this country were Christians, and that their descendants are still living in this country, and that "Christmas" is the holiday that falls on December 25th, and that that is the reason you don't have to go to work on that day, shut the hell up and, if you don't like the idea of the Christmas season in this country, go elsewhere.

Hmmm, the Bag Lady needs to work on her diplomacy skills.

She also wonders how long it will be before someone complains about saying Happy New Year.

In other news, it has been extremely cold in the Bag Lady's neck of the woods, which may be contributing to her crankiness. But it is supposed to warm up today, so she is thinking seriously of venturing further than the barn and pasture (where her chores take her on a daily basis). She may even make it as far as the post office to see if there is anything exciting there!

She hopes your holiday season was filled with joy, and that the new year will bring you much happiness and prosperity.

I have read many comments online stating that you have to be a parent to fully understand the horror of Sandy Hook.

I resent the implication that simply because I have never given birth, that means I don't understand loss and heartache.

I have also read that now is not the time to talk about gun control in the United States.

When better?  After the media coverage of this tragedy ends? When the picture of those children with their eyes shut and hands on each other's shoulders being led away from the scene of carnage fades from our memory? (Which, by the way, will take a very long time for me, personally. I cry every time I see it. I can almost hear the wail of terror from that little girl in the blue top.)

I have read many comments from both sides of the gun control issue, and one, especially, that sticks in my mind is, "if all the teachers in the school had been armed, this man would have been stopped before he killed so many."

The idea of a bunch of teachers rushing from the classrooms, guns ablazing, is patently ridiculous. How many innocents would have been caught in the crossfire? I am not advocating that all guns need to be wrenched from the hands of the citizens of the US, but can anyone explain to me why an ordinary law-abiding person needs a machine gun or semi-automatic?

I didn't think so.

Yes, they fucking well do.

The Bag Lady is feeling a little whine coming on, which she is trying mightily to suppress. It has snowed almost continuously in her area for over a month. The snow arrived early which, in itself is not unusual, but that is usually just a reminder, and it warms up and the snow goes away... but this year it has not really warmed up and it continues to snow.
This was taken October 24th..... 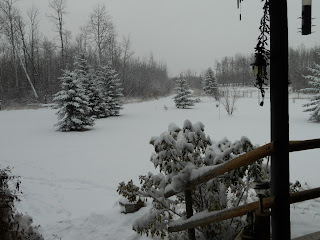 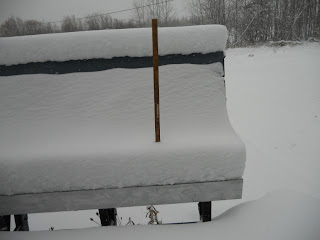 The deer visited the Bag Lady's flowerbed one day, looking for an easy meal.... 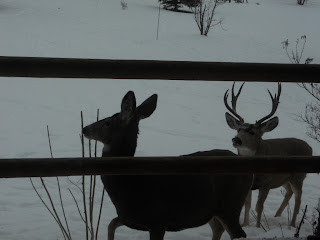 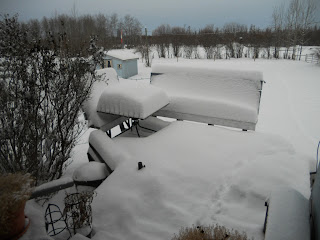 And more (the Bag Lady stopped measuring - she usually takes these pictures by dashing outside in her slippers, and didn't want to wade through all that snow) This was yesterday.... 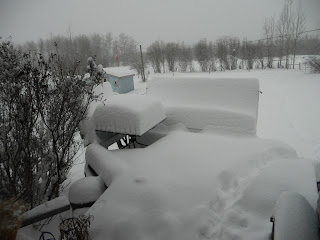 And it continues to fall.... 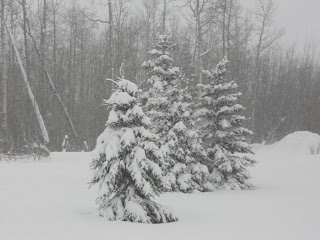 The Bag Lady goes out every day and sweeps roughly 3 inches out of the troughs in order to give her calves grain.

She has lived in this area most of her life and understands that it snows in winter, but this stretch has seemed long and cold, and she is hoping for a Chinook to blow through one of these days to give her a break. Actually, it doesn't even have to Chinook..... just a couple of days in a row without clouds dumping snow, and perhaps a peek at the sun, would make her happy!

Has winter arrived in your area yet?