The hummingbirds are back in the Bag Lady's neighbourhood and it's not safe to go outside!

The Bag Lady hung one feeder last week, thinking it was probably too early, but the very next day there was a hummer. He guarded that feeder so fiercely that the Bag Lady dug around and found two more.

He guards them just as fiercely, but they are far enough apart that the other hummingbird(s) can at least sneak a drink periodically.

He also chases away any other birds that get too close...... 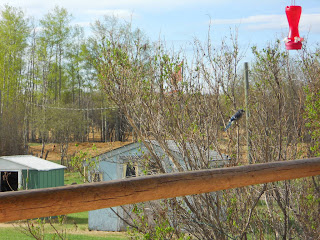 ....... including this blue jay! Immediately after the picture was taken, he went on the offensive. The Bag Lady also witnessed him  chasing a purple finch around and around in that bush! (In case you are having difficulty finding the hummingbird in the picture, look just above the white roof of the garden shed in the lower left portion of the picture. He and the blue jay are sitting in the same bush.)

The Bag Lady knows that the hummingbirds will settle down, but for now, she is careful when she opens the door because they zip along her deck at warp speed!