Last year about this time, there was still so much snow on the ground that the deer were sneaking under the gate into the Bag Lady's hay storage area, looking for something to eat. She caught them red-hoofed one morning...... 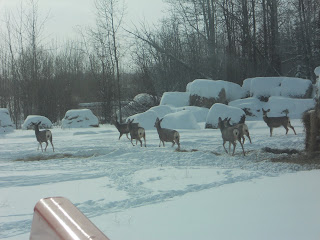 ... and used the tractor to herd them toward the gate.

Photo Finish Friday is the brainchild of Leah, at the Goat's Lunch Pail.
Posted by the Bag Lady at 6:21 AM 10 comments:

Baggie has her Cranky Pants on Again!

The Bag Lady has a complaint. (Okay, to be honest, she has far more than just one complaint, but she'll spare you the whining about her personal problems).

Why can't they make things the way they used to? (She knows the 'good old days' weren't really all wine and roses... well, except a few times.... okay, once! And then she woke up with a hangover and the freakin' flowers died.)

She understands that in order for companies to make money, everything they make has to have a built-in "shelf life" - this includes cars, appliances, clothes, etc. - everything wears out (including the Bag Lady, but she promised not to whine about her personal problems.)

The thing that is annoying her today is that even when things are almost new, they don't perform the way she has come to expect, based on previous experiences with similar products. To be specific.... she had to buy a new dishwasher last year when her new flooring was installed and it was discovered that the old dishwasher (which she loved dearly for it's almost mystical cleaning abilities) had burned the linoleum under it. This made her sad (and it also scared the crap outta her and made her look askance at her formerly beloved dishwasher...." all this time I've been trusting you and loving the job you've been doing and you've been betraying me by trying to set my house on fire?? Wasn't I paying you enough? Was I mistreating you? Did you feel unappreciated and taken advantage of? Why didn't you say something?") but she trundled off to town to buy a new one. In her haste to purchase something, she made a bad choice the first time around. She bought a cheap model, which sprung a leak after a short time, but she had also made a good choice in where she purchased it and they took it back and refunded her the entire purchase price (bless them). The second replacement model took her a little longer to choose, and she shopped around a bit, looking for a reasonably priced model that had most of the bells and whistles that her previous model had.

Fast forward to this morning. The Bag Lady has learned that her first dishwasher was exceptional (at least, compared to this one) - she did not have to rinse her dishes and everything came out sparkling clean, regardless of the type of dishwasher detergent she used. This model has been a little different, but she has adapted. She cannot get as many dishes into this one (the racks are not as conveniently configured) and she has to rinse a lot of things that she didn't worry about before (Hello corn, and potato pots).

Yesterday, she made cinnamon buns (and regular buns. And donuts. And discovered, after she had set the buns to rise for the second time that the element in her oven was burned out. But she promised not to whine about her personal problems. Suffice it to say, she now has a greater admiration for her table top roaster oven, which she has previously only used once a year to cook her generally enormous Christmas turkey.)

She filled the dishwasher with the dishes she used for baking, plus supper dishes (and breakfast dishes, and probably the previous nights' dishes) and turned it on. This morning, she emptied the dishwasher and was dismayed to find streaks on several of her white dishes.....
Streaks of cinnamon.
Cinnamon, fer cryin' out loud!
Her dishwasher can't even handle cinnamon.
Sheesh.
She understands the built-in shelf life. She understands that not everything can be perfect but she cannot understand a dishwasher that can't even get cinnamon off her dishes. 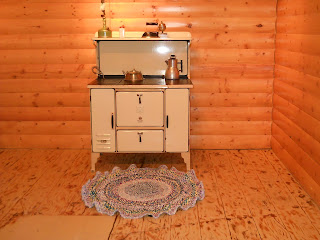 The restored stove!
Along with a braided rug she made last week to complete the look.
(If anyone has suggestions on how to get the hastily put together rug to lie down properly, she would be forever grateful! Unless, of course, the suggestion involves taking the rug apart. If that is the only solution, it is going to stay crinkly.....)
Please note the "wood" floor (which is actually cement), courtesy of the Bag Lady's talented assistant curator!

Photo Finish Friday is the brainchild of Leah, at the Goat's Lunch Pail.
Posted by the Bag Lady at 6:30 AM 15 comments: