The Bag Lady has been keeping herself busy of late. If watching hours of television counts as busy. Ahem.

She did leave the ranch the other day and when she reached the highway, she saw this incredible sight..... 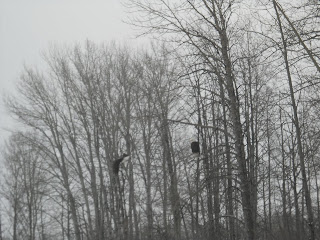 Not one but two bald eagles, sitting side by side in the trees on the edge of the highway. Fortunately, there was no other traffic, so the Bag Lady was able to scramble around in her briefcase and find her camera. Just as she snapped the picture, one of the eagles decided not to hang around for the photo op., but the Bag Lady caught him anyway. If you click on the photo and enlarge it, you can see that the other eagle is watching his buddy depart. He was perhaps a little more confident that the Bag Lady wasn't a threat because he stayed where he was long enough for another photo. Sadly, it turned out to be quite blurry, but the Bag Lady was happy to have taken the first picture.
Posted by the Bag Lady at 11:36 AM 14 comments:

The Bag Lady has been immersed in the past for much of the new year. She is the volunteer (aka unpaid with absolutely no experience) curator of the newly minted museum in her little community, and she and another volunteer have been working hard to accession the donations received so far from community members.

The Bag Lady has also been wasting spending time on Ancestry.com. 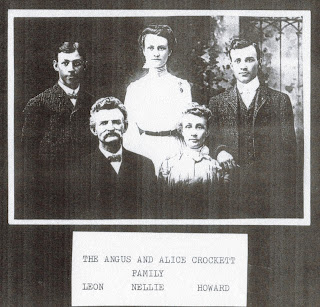 She has had this photo for many years, but has really had not very much information to go along with it. Angus was her great-grandmother's brother, and he moved his family away from Nebraska (where much of the rest of the family was residing at the time) in the late 1800's and contact with him was lost.
Thanks to Ancestry.com, the Bag Lady now has more information on that branch of the family!
(At least, she hopes there isn't another, completely unrelated family out there using this picture on their family tree!)

PFF is the brainchild of Leah at the Goat's Lunch Pail. Go check out her photo for today!
Posted by the Bag Lady at 5:35 AM 15 comments:

Is anyone else disillusioned with the direction our society appears to be heading? It seems as though the only thing that rules is greed. Governments give lip service to the public good, but the only reason people seem to go into politics anymore is for the money. A few years in politics and they receive a pension for life, regardless of their actual contribution.

Oil companies care nothing for the environmental damage they do. Money rules there, too. Fracking (blasting the rock deep underground to release the gas trapped there) is very damaging to underground water supplies, but the "greater good" rules - who cares if a few underground water wells are damaged or destroyed? The need to wring every ounce of gas and oil out of the ground to fuel society's machines takes precedence.

So many young people appear to have no moral compass anymore. Cruelty to animals, bullying, a sense of entitlement and their lack of personal connections dominate. They have no idea where their food comes from, nor how to employ the simplest of techniques to ensure life and limb. Take them out of the city, drop them in the woods without a GPS and they would be totally lost and starve to death because they have no idea how to navigate nor what is edible (no, you can't pet that bear cub.... didn't you see the sign saying not to feed the bears? 'Cause that's what you'll be if you get between momma and her cubs - bear food.)

We are admonished to bubble-wrap our children in order that they attain adulthood without scars, disabilities, drug addictions, immunity to disease, common sense, the ability to stand up for themselves, or suffering any kind of negative life experience. This will ensure that they are well-rounded, capable adults who can speed-type (but not spell) with the best of them, but will faint at the sight of a shovel, or a piece of paper and pencil.

Huge conglomerates dominate government to the point where policies are based not on what is good for the people or the country, but for the stockholders. It matters not that one company appears to be in control of most of the seed in the world (and are genetically modifying it for some nefarious reason!), the government made money. (Conspiracy Theory Alert.) If you control the world's food supply, you control the world.

The Mayan calendar ends this year. Did they really know something we don't, or did they just get tired of doing all those calculations? Ran out of room on the tablet? 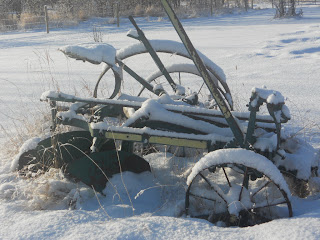 There is not a lot of snow in the Bag Lady's world..... yet. In fact, she took this picture a couple of weeks ago and the snow is now gone from the old plow.
She had a very busy and fun-filled Christmas season, and is now telling herself it's time to get back to normal. She still has a few decorations to take down and put away, but almost all traces of the wild and crazy holiday are gone.
She hopes all of you have a wonderful year this year!
Posted by the Bag Lady at 9:54 AM 18 comments: