She used those little compressed peat pellets that expand when you add warm water. She loves those things! It's so cool to watch them grow. (small things amuse small minds...)

She hopes that this year will not be a repeat of last year. Last year, she started her tomato seeds as usual, and they did very well. She had them in trays on top of her fridge, and once they had grown to about an inch high, she decided to move them to the top of her upright deep freeze in another room. Where she promptly and completely forgot all about them. Imagine her chagrin when she went to get something out of the freezer a couple days later and there were all her little tomato plants, dead. Geez, she had never done anything like that before!

The Cowboy told one of his friends about it, laughing at the Bag Lady's forgetfulness. His friend has a greenhouse, and one day, to the Bag Lady's surprise, he showed up at her house with an entire flat of tomato plants that he had started! Sixty-four plants, to be exact. And all of them were cherry tomatoes. 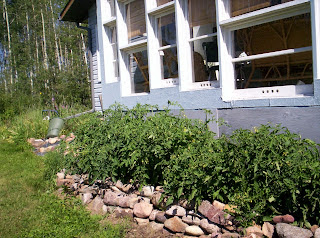 One of the Bag Lady's cousins had come to visit her, and also brought her a couple of tomato plants that she had started (and remembered to water...), so the Bag Lady did have lots of tomatoes, in spite of the disastrous seed-starting fiasco.

She is looking forward to comparing the different varieties that she planted. She thinks that some of them will look really pretty in salads together - imagine a salad with red, pink and yellow tomatoes! She has learned, over the years, what works and what doesn't, as far as making salsa and canning tomatoes. Yellow tomatoes do NOT make attractive salsa. At least, not when you make huge batches for canning. The Bag Lady's salsa recipe calls for tomato paste, and when you combine the yellow tomatoes with red tomato paste (because she has never seen tomato paste made from yellow tomatoes), the resulting salsa turns an unappetizing brown. It still tastes good, just doesn't have the eye appeal. So she will use the yellow tomatoes for salads or fresh salsa, and keep the red ones for the salsa that she cans.

She will go to a greenhouse sometime in May and buy some pepper plants to grow in pots on her deck. She may have to buy tomato plants then too, if she's as forgetful as last year.... But she won't be, because all of you will remind her to water, won't you?

I was impressed enough with the jeans to barbecue tool bag, but do you mean to say you actually know all those types of tomato one from another?

I go to the store and buy the tomatoes that look pretty that day.

You are a wonder to behold!

df Bag Lady - Nothing beats a tomato fresh off the vine.
I'm so looking forward to real salad again.

dfTerrie - funny you should say that about a wonder...pretty sure the Cowboy wonders sometimes ("wonder what the crazy old woman is gonna do today...?") :)
dfLeah - it seems to have been a lo-o-ong winter, and I agree - am so looking forward to fresh stuff out of the garden. Too bad it's gonna be awhile yet!

Mmmm fresh salsa. I love making fresh salsa when the tomatoes are so ripe! Maybe I will have to plant some tomatoes now that I have a yard!

Oh, yes, Sarah - there's nothing like tomatoes you have grown yourself! Get thee to a greenhouse and find some tomato plants to put in your yard!

No, let's not. Those tomatoes and resulting salsa sound so drool-worthy. Yum!

I will remind you if you remind me...

I started some seeds on Saturday - 3 types of tomatoes, 1 tomatillo and 5 (?) varieties of pepper plants. I normally keep them upstairs in the kitchen, but we got new kitchen furniture last summer and had to rearrange things, and I don't really have a place to put them. So, they are down in the basement on the hutch attached to my desk.

Hopefully I will remember to water them and they will get enough sun and it is warm enough, and I will actually have a place to plant them outside when the time comes...

Hil - as long as they survive the Bag Lady's forgetfulness, we'll have salads and salsa, and maybe even pizza sauce!

Javachick - we'll have to make a pact... and get everyone else to remind us, too!!

My father has always grown tomatoes, but not me. I love fresh tomatoes and he usually sends me some from his home in NM. Now that I have a yard, you'd think I'd have a garden, but it's a small yard with one of the biggest oak trees ever shading the entire thing. No garden. No tomatoes.

Oooh...buy pepper plants.
I had some a few years ago and it was great watching them bulb up and grow...I have bad luck with growing foody plants (I've yet to get a viable herb garden going despite the jungle of other plants in my home) so it was quite exciting.
I'd love a mini greenhouse in my yard...but 8 kinds of tomatoes would be a bit much for me...dont' like them very much, so I'd just plant a bunch of Ramos and be happy :) I bet you can make lots of canned ones and salsa tho...yum

BG - I'll be sure to post lots of pictures as things progress so you can enjoy "Gardening with the Bag Lady". :)

Geosomin - I was not a big fan of tomatoes, either, until I started growing my own. Such a difference in taste! And I love growing peppers to use in the salsa. It makes such a difference to have fresh-picked ingredients.
We are the opposite, though - I never have much success with house plants - you would think with them right under my nose, I would remember to water them...but, no.
Sigh.

It does sound a bit excessive, but I know how much canning you do, so no.
Did you water today?

Oh yummy fresh tomatoes!!! (Tomato?) I hope you won't have the same problem as last year...of course I hope you don't have any new problems as well.

There is no simpler pleasure that a juicy home-grown tomato sprinkled with a little salt and pepper. Oh man it makes my mouth water.

Not suitable for canning, but I made this simple salsa the other day that was so tasty!

SERVE immediately with the crackers. Or, cover and refrigerate until ready to serve.

I love that they fell they need to tell you not to put the crackers IN the salsa.

Reb - I didn't water them, but I did remember to check to see if they needed water!!
Emily - I hope I don't have any other problems, too!
SB - your salsa sounds yummy - I'll have to make note of the recipe and give it a try when I have fresh tomatoes!!

Mmm I loves the tomatoes.

Last summer I virtually destroyed our mini herb garden (growing in pots on our balcony) because I didn't water them 3 times a day in the heat. Oops:)

Sagan - I know what you mean - I'm terrible about remembering to water...sigh.

I have forgotten seedlings so many times...that I now just buy the plants...one thing I am really looking forward to...is vine ripe tomatoes...yum!

Please share your salsa recipe...please...please...everyone I have ever tried...tasted awful when canned.

Oh, goodness. Sunny Delight, the Bag Lady will have to give that some thought...she has never shared her secret salsa recipe before....
What'll you give me in return? :)

I definitely don't think 8 varieties is too much. I planted 35+ this year.

Hi, tomatocasual! Okay, you win! You must have a greenhouse, or live in a warmer climate than I do!