One day back in February, the Bag Lady was sitting at her computer when the sun started to rise. She glanced out the window and thought, "oh, another gorgeous sunrise", but decided she wasn't going to take a picture (she has so many sunrise pictures). A few seconds later, she looked again and thought "Holy crap, I HAVE to take a picture of that!" This was the picture: 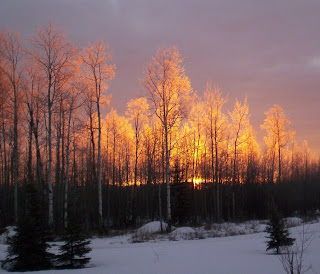 She was so pleased with the way it turned out, she sent it to her favourite television station, and they used it on the morning weather forecast. The weatherman commented that he thought it was an award-winning shot.

Last month, as some of you may recall, the Bag Lady decided to enter her picture in a local competition. She had quite a difficult time deciding on a frame, but this is eventually what she settled on: 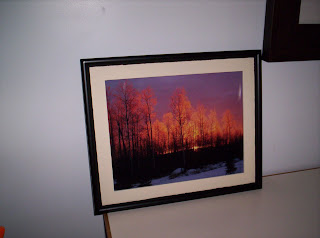 The contest is decided by a "people's choice" vote, and closed for voting this past Saturday. The Bag Lady got home from town on Tuesday to find a message on her answering machine, asking her to please attend the Gala evening the gallery was holding on Wednesday night. The message stated that she was one of the finalists.

So yesterday was spent in a flurry of preparation (with the Bag Lady standing in her closet, wailing that age-old cry of women everywhere "I have nothing to wear!!"), and she and the Rancher toddled off to town for the awards ceremony.

When the MC started announcing the winners, he started with the photography division, and stated that there were 3 prizes. When he announced the honourable mention prize, he surprised the Bag Lady by saying "Number five" (the Bag Lady's entry was number four). The Bag Lady was so sure she would win third, that she could hardly believe it when she didn't!

Instead, she was awarded second place!

Here is a picture of her with her picture and the ribbon awarded to her photograph. 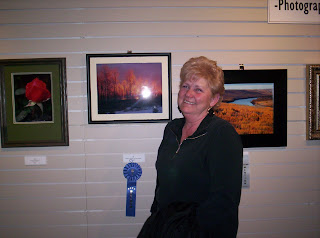 First place, by the way, went to an absolutely gorgeous professional photograph.

So, thanks to that astute weatherman for pointing out that it was an award-winning shot, and thanks to all of you for encouraging the Bag Lady to enter the competition! It was a lot of fun, and very exciting to win second place!
Posted by the Bag Lady at 7:30 AM

Oh, yeah.
Good for you. Win, place, or show I am damned proud of you. That is a beautiful pic.

Thanks, cousin! I was very happy just to be a finalist!!

It really is a beautiful photo :)

See?? You is awesome. Now watcha gonna do with said award winning photo?

WOW! Congrats BL! It really is a stunning shot!

Christine - thanks! I was lucky to be a witness to a gorgeous sunrise!

Marianne - aw, shucks, thanks! I'm not sure what I'll do with said award-winning picture. Find a place of honour for it in my house, probably.

Rupal - thanks so much!

[bounce bounce] We get to say We Told You So!

Worth all the anxiety, wasn't it?

I love the pictures of sunrises that you post. Yeah for doing a great job!

Just a note: with all that's happening with the global health situation, your grocery cart bags should really sell well.

How wonderful. I am thrilled for you. For a gal with "not a thing to wear," you look pretty snappy!

Mary Anne in Kentucky - yes, you can all say "I told you so!" - I'm still smiling about the whole thing.

Vee - thanks! I wish the bags were selling faster than they are.... sigh.

dfTerrie - Aw, thanks. You should have seen the disaster zone in my closet after I tried on and discarded a dozen or more outfits.... :)

Congratulations. That is such a beautiful picture.
What a great win for you.
What a thrill. And you look wonderful. :-)

Woohooo you! I knew I'd be reading and "I WON!" kind of post about this as soon as you said you were entering it. :) This is more exciting than American Idol! ;) Congrats, Baggie. I'm very happy for you. :)

Wohoo!
That is fantastic!
It really is a gorgeous photo - it's hard to capture the glow of sunlight on film like that and you really did a fanctatsic job. What are you going to do with the photo?

POD - thanks! It really was fun! (and thanks for the compliment!) :)

Hilary - thanks so much - it means a lot, coming from such a superb photographer as yourself!

Geo - thank you. The picture is still at the gallery (and for sale), but if it doesn't sell, it will have a place on the wall here at home.

I am so proud of you! It is a lovely photo and deserved to win.

A rare shot of the BL....even more beautiful than that photograph! Congrats on the win. You are in first place in our hearts!

Lucas - thank you - that's very kind! The Bag Lady hates having her picture taken, so it is, indeed, a rare thing!! :)

Huge Congrats! I knew it was a winner!

Melissa - thanks ever so much!

BG - thank you! It was pretty exciting!

awww....congrats!!! I knew it was a winner :) Looking as gorgeous as your pic!

That is so cool! Way to go Bag Lady!!

Beautiful picture, beautiful lady. So proud of you! I'd hang that thing where everybody that came through could take a good look!

Congrats on your win - and OH WOW - what a BEAUTIFUL PICTURE! *sigh* I just wish I had sights like that to take pictures of ~ breathtaking. Thanks for sharing it on your blog and bringing us a little closer to the beauty!

CONGRATULATIONS! You totally deserved it! That pic is just gorgeous (as are you, my dear!)

Annette - thanks so much!

Amy - thanks! That's what I think I will do with it.

Aleta - thanks. Glad you like it. I am really lucky to have such gorgeous skies to admire!

Charlotte - thank you! And you're very sweet to say that!

Congrats, BL! It really is a wonderful picture.

What a lovely photo! Congratulations on the win. You very much deserved it.

And may I raid your useless, empty closet on Saturday for an outfit to wear to my high school reunion?

Such a beautiful sunrise, Bag Lady! It didn't surprise me that you won second! You will have to keep watching for the next photo moment. When you least expect it, you will produce another beauty! Keep that camera handy in your pocket! Congrats, babe!

CONGRATULATIONS and THANK YOU for sharing the journey and finally a forward facing picture of you grinning back at us!

And I also love the picture of you with the picture. Great to see your smiling face.

Congratulations!
It honestly does not surprise me that you won - it truly is a gorgeous picture!
And, we got to see a photo of YOU, too! :)

Congratulations! You are one awesome Bag Lady!

I admire your photography. I can only use PhD cameras -- you know, "Push here, Dummy!"

Hi, Elaine! Thanks so much for your kind words! And you're welcome to anything in my closet (exactly how long ago did you graduate high school? 'Cause there's probably something in that closet that is from that era....:))

Redbush - thank you so much! I do carry my camera most of the time, just in case I ever get another opportunity like that one!

Mizfit - thanks! It was support from all my blog buddies that helped me enter the contest!

Crabby - thank you. I wasn't sure about posting a picture of myself, but decided that just this once would be okay.

kcinnova - thanks! That sunrise was a lucky, once-in-a-lifetime opportunity, and I'm glad I managed to capture it!

Messymimi - (oops, we were posting simultaneously) - Thanks so much. Truth be told, that's exactly what I use for a camera!! Just a little point and shoot digital! Love that you call it a PhD camera - I'm totally stealing that phrase! :)

WOOHOO!!!! Pat yourself on the back! I see a new career in the Bag Lady's future :-)

Missicat - thanks! Not so sure about a career, though - opportunities like that sunrise don't come along every day!

Thanks so much, Javachick!

A PHOTO OF THE BAG LADY?! That's a rarity indeed! So nice to finally see a full-on picture of you :)

And congratulations! It's a really lovely photo and you definitely deserved the ribbon.

Aww, thanks, Sagan! I thought it was time to show that I do occasionally clean up!
And thanks for your kind remark about the picture!

You scrub up pretty darn good, Baggie! Both you and the photo look like a million dollars! Photographic excellence obviously runs in the family.

Re the Smart Cart bags. Make a Squidoo lens (free) on them. Write a few articles and post at Ezine Articles (free) using all the current "hot" keywords in the titles. eg "Swine Flu: How To Avoid It", "Swine Flu: Does It Live On Supermarket Trolley Handles" etc.

This current health scare could be good for your business! Once you get into marketing, there is no cloud so black that you can't see a silver lining!

Awesome pawsome! Good for you!

IzzyBeth and Georgie K - thanks so much!