Close Encounter of the Glass Kind

Tragedy almost struck at the Bag Lady's house the other day! She was inside, just about to go outside, when she heard a thump - a bird had struck her kitchen window! She went outside as the Rancher, who had been walking toward the house, picked the unfortunate thing up out of the flower bed. The Bag Lady corralled the cats in the house, and she and the Rancher had a good look at the little finch. 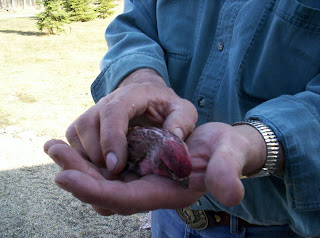 He did not appear to have broken anything, but he was certainly stunned. The Rancher set him on the ground, but the Bag Lady decided that wasn't a good idea, so she picked him up and held him for a few minutes. His beak was open, almost like he was having trouble breathing. He made a little trilling sound and started blinking his eyes. 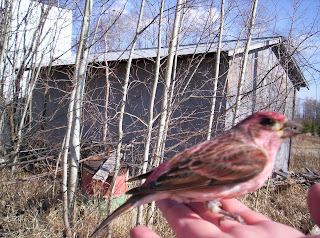 He finally seemed to be recovering well enough to stand on his own, and his digestive system was still working, so the Bag Lady set him on the feeder. She watched from a little distance away as he tried to reorient himself. 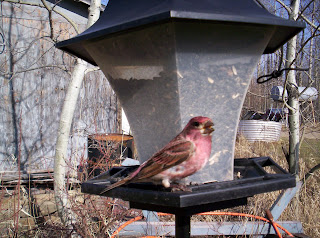 After about 5 minutes, he seemed much better, so the Bag Lady went up to him and offered her finger - he stepped up on it, looked her in the eye, then flew away!

These little finches had been hanging around the Bag Lady's bird feeders for a couple of days, but they are notoriously shy and difficult to photograph, so the Bag Lady was pleased to have the opportunity to get a closer look. She was also quite relieved that the poor little guy survived his close encounter with her kitchen window.
Posted by the Bag Lady at 12:01 AM

OMG! He stepped back on your finger! How lucky are you? There must be good karma about to unfold from your small act of kindness. Such a pretty little fellow too!

Cute little thang he is!!

Right out of a windex commercial :)

wow. how neat (and how kind you are).
I wonder if youd ever wanna do a post about why birds 'suddenly' fly into windows which have been there for eons?
we had 3 do that this weekend (!) & it scared the bejeebus out of me!

So glad the little fellow is ok! We get some unfortunate victims in the summer when berries get ripe and the birds get drunk on them and start smashing into the windows. Nice to see such a happy ending!

Our Church has stickers on the window that look etched - it makes the birds recognize that it's not an empty space. But maybe they're just indicating where they'd like additional feeders...

So glad it was a happy ending! Great pictures too. :)

Poor little fella! Birds are always flying into my mom's big bay windows. Usually just stunned, but we always ran out to pick them up before the cats could get them!

"his digestive system was still working"
heh. Wonder how you know THAT? ;)

What a treat to have such wonderful photos because you rescued a stunned bird.

What a cute little guy!! I'm so glad he's okay! A bird hit our window once and was basically reduced to fluff... and blood. It wasn't pretty.

What a wonderful thing to happen.

Now that the birds have finally decided to use the feeders they hit the windows all the time, but without hurting themselves, it seems. Too much coming and going and their cooperative Air Traffic Control fails.

During the ice storm there were some clumps of feathers left behind. I think all the shiny glittery smoothness led to some mistakes.

Your bird rescue work will serve you well.
I'm so glad that house finch (or was it a purple?) is fine and that all parts of him were working. That may well be the top rung avian "thank you."
That he hopped on to your finger is a great sign.

Reb - I hope you're right - I can always use good karma!

Rupal - I wasn't sure anyone would know what I was talking about if I mentioned the windex commercial! :)

Christine - He was gorgeous! And I was so relieved he was okay!

Miz - I think it's probably simply because it's spring and they are thinking of "other" things.... :)

Crabby - we don't have a lot of drunken bird episodes in the fall (not enough berry bushes around) - there are usually enough drunken people to make up for it, though!
:)

Marianne - I'm tempted to hand something on the windows - leaving them dirty hasn't seemed to help.... :)

JavaChick - thanks! Me, too.

Gena - I've had a few unhappy endings with this particular window... one of them was a partridge - guess where he ended up?

kcinnova - yup, you guessed right! I forgave him, though. It was worth it just to get some great photos of him!

Charlotte - I've had a few of those unhappy endings, too. Worse yet is if the cats get to a stunned bird before I do.....

dfTerrie - It was a great opportunity to get a good look at him - I'm just sorry the poor little guy ended up with a headache! :)

Mary Anne in Kentucky - I think the feeders are close enough to the window that the birds can't get enough steam up before hitting it, which is why they generally survive. Thank heavens.

dfLeah - Thanks. I am almost positive he is a Purple Finch. They are all quite similar, but according to the pictures in the bird book, he looks the most like a Purple.
And I hope it is a good sign he jumped on my finger (is it also a good sign he pooped on my hand....?) :)

Birds are so intelligent (most, anyway). This lovely little critter understood your intentions, and I totally agree with Leah that his gift of hopping onto your hand is a good sign. You and the rancher a good people. :)

Aw, shucks, Hilary - most people would have done the same thing! (Rather like rescuing racoon babies - when do we get the rest of that story?) Thanks for your kind words.

Excellent that you had your camera handy! Beautiful bird, and you're such a kind person. Wonderful! Vee at www.veegettinghealthy.blogspot.com

How wonderful that he was okay and seemed appreciative of your efforts! I once fished a bird out of a fountain and he sat open-beaked like that for a long time, getting re-oriented. I like to think they can sense our goodwill, but I'm probably delusional.

Wow, that is the sweetest thing I've seen in a long time. St. Bag Lady of Assisi.

What a great encounter, Bag Lady! Not the window part, but him sitting on your finger! We've had several tragedies in the past few weeks of a similar kind, only a lot of them didn't survive. We've had juncos, and a woodpecker hit it so hard that I think he broke his neck. I absolutely felt horrible that there was nothing I could do. I've even wondered what we could put on our front window to prevent it from happening again!

Hilary - I'm looking forward to it!

BG - I'm probably delusional about it, too! I was afraid the poor little thing would die of fear from me touching him, rather than his injuries!

Melissa - I wouldn't quite go that far, but I do hate to see little creatures suffer! (even bugs that I don't like - I'll save them if I can...)

Redbush - (we were posting simultaneously!) I have been trying to think of something to put on the window, too - I've tried various things over the years, but nothing has worked so far.

Maybe you could get some window stickers so that they can see that there's something there. Plastic reusable rub-ons or something. *shrug*

I used to raise finches but we didn't have any of that color(ation). Could be a house finch? They have a beautiful call.
I named one of my finches "Half". For Half-Finch. Actually never had to write that bird name down until right now. (probably could have lived the rest of my life without writing it down.) And it would have been written as "Ha-Finch".
Love the birds too. Love to hold one in your hand and save it's life. Finches are great breeders.

Poor little thing! Maybe he was auditioning for a Windex commercial :-)

Georgie - Thanks - that's a good idea! I'll look for some next time I'm in town.

POD - it's either a house finch or a purple - they look quite similar. And yes, I love the birds (and I even forgave it for pooping on my hand!)

Missicat - well, if that was what was going on, he definitely has my vote! Windex should hire him!

AWWW! I'm glad he made it; and how cool that he stepped up on your finger! So cute.

Thanks, Marste - it made my day when he flew away!

Awww how sweet that you saved him! Those are some great pictures you managed to get of the little guy, too.