The Bag Lady is the mistress of half-finished projects. She eventually does get things done, but her house is almost always in a state of turmoil. Perhaps this is due to some deep-seated fear that if she finishes everything, she'll die! As long as she has things to do, she reasons, she has to stay alive to do them. (she didn't say it was RATIONAL!) (She is also, by the way, very superstitious and is even now contemplating removing the sentence about dying.....)

In any case, she still hasn't finished the hallway (cut her some slack, she's been working every day since she finished the painting, and has to work again tonight....) and she has some vague ideas in her head about hanging some sort of rail from which to hang an assortment of yet-to-be-determined artwork/paintings/photographs. Or not.

Naturally, she forgot to take a "before" picture of the wall she is talking about. And the one picture that she did take is rather poor.

Here is the only "before" picture she thought to take: 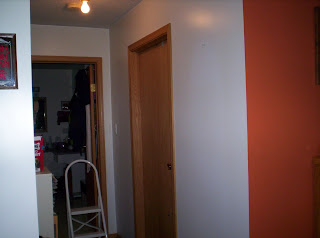 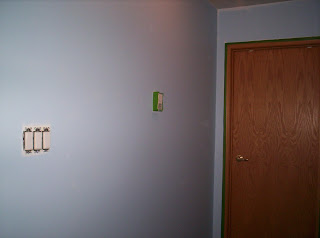 And this is what the hallway looks like right now (seriously... just took these a minute ago): 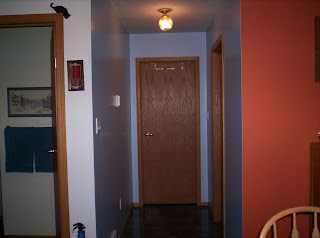 This is the wall she's talking about. It's only eight feet long. 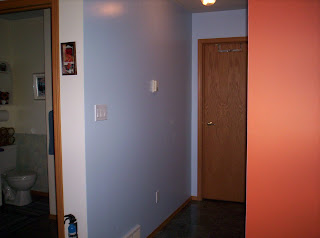 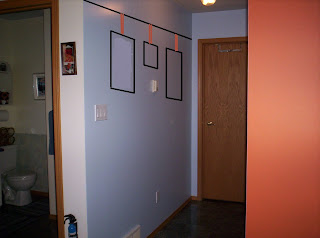 What do you think? She's open to suggestions....

(Oh, and by the way, there is really quite a difference between the colour in the before and after, even if it doesn't look like it in these pictures!)
Posted by the Bag Lady at 8:23 AM

Pictures would be fine and would liven it up.
I really have nothing of substance to offer.

I figure Death is a miserable enough bastard to take me when I'm smack in the middle of something. As long as stuff gets done there's no fun in taking me. It's also a great excuse to not do anything.

I like mirrors in a space like that. It's a shame that your thermostat is right there though. I'm thinking that a cluster of photos might help disguise its presence. Around above and below it. I'm not a fan of high-hanging photos. Sure is a nice colour.:)

As for the fear of dying.. change the i to a y (die to dye) and all you have to fear is a change in hair colour. ;)

dfLeah - thanks. I keep hoping Death will ignore me for a very long time yet!

Hilary - EEP! Thanks for the dye reminder.... something else I need to do soon! :D
I hate having that thermostat there, too, but haven't the knowledge to move it myself.... and am not sure where to move it TO. Sigh.

Perhaps a mix of pictures and mirrors? Need to experiment.

I leave those decisions up to my better half but we do have something in common: superstition. I knock on wood daily.

My first thought was to build a little shelf over/ around it .. kind of with a lip that might help disguise it and you can show something off on the shelf depending on how wide you make it... a plant, a knick-knack or books if it's long enough. But I don't know if that would interfere with how it reads the room temperature too much.

I just did some Googling. Here is one solution though it would have been better to see this before painting. http://www.design2share.com/qa/2009/10/31/how-can-i-hide-the-thermostat-box-in-my-living-room.html

Others are suggesting placing a loosely-woven basket over it and then decorating it as you see fit.. some faux flowers.. vines.. painted design.. etc. That might look nice combined with mirrors, pictures/paintings and shelves.

I laughed out loud a the "if she finishes everything, she'll die!" Maybe that's my reason for starting a zillion things and not finishing them...like my plan for a hanging picture area in the basement. Heh. *cough* ahem.

Hi. I am very opinionated.
I sold home decor items for a while and so have a very small amount of decorating knowledge. Actually, "knowledge" is even a stretch. (And Katie does all my decorating.)
A few little tips they gave us: Pictures should be hung at eye level or lower if behind a couch.
Divide pictures in half and hang the next one no more than that distance away from each other. Groupings of objects should be in uneven numbers.
I would hang pictures and a mirror since it's a tad dark in there.

Hilary - I have been toying with a shelf idea, too. I had a bookshelf in that hallway, but wanted to change it.... And I wish I had known about the thermostat thingy you linked to!

Sparrow - I did know that about hanging pictures at eye level, which is why I'm having so much trouble with this hallway. The damned thermostat is in the way. Sigh.

Is this the less dark version? I like it - I also know that you don't leave the bedroom door closed a lot. Look into that remote sensor that Hilary suggested...or into moving your thermostat into the bedroom where it is cold.

As for the photo wall, that is good placement. As you don't sit in the hall and the only seating near there are your high stools at the kitchen island it should be fine. There is a cool hang-by-wire system for photos that would work well there. If I can find it I will send you the link.

Reb - I actually talked to your old buddy, D.D. (the electrician) the other day about moving the thermostat - he said it wasn't all that difficult, except I'd have to fish wire. sigh.
Then, of course, I'd have to patch the hole left in the wall, and repaint. I think I'll just try to disguise it for now. :D
Hope you find that link....

At least you actually start your projects. Generally, I only think about doing them!

Hi, dfTerrie!! If I actually DID all the things I think about doing, I'd be busier than a cat on a marble slab! Hehehehe

I like the light color better than the dark, too. I think the picture rail is a fine idea, because it allows you to change things easily. (I have seven days to hang a lot more pictures than I've gotten hung in the past eleven months. Obsessing, here.)

I vote for putting moving the thermostat on the project list because that looks like a terrible place to measure the temperature, aside from aesthetics.

One of my favorite sig lines:

"If you're going to drop dead, best to have read as much interesting stuff as possible first."
Marilee J. Layman

Mary Anne in Kentucky - I hope you get everything exactly as you want it in your house before the big tour!
I really am leaning toward some kind of rail that will make it easy to change the pictures when I want.

Love it, but I think the hanging needs to come down a foot or so.

Thanks, Me. I'm not much of an artist, so in reality, they probably will be lower.

Okay, just for that I'm going to take a picture of under my kitchen sink.

Love all the recent posts! Especially the one about the calves.

Our hallways are too narrow for pictures. The boys would just knock them off. Or me. (The pictures!!! I'm pretty sure no one is trying to knock me off....)

kcinnova - thanks for the clarification! :)

Your list of things still to finish is your job security, like always having more dishes to wash and laundry to do and floors to scrub and children to teach is mine.

"God put me on this earth to accomplish a certain number of things. Right now, I am so far behind, I will never die." Anon.

Messymimi - that quote is exactly what I meant! :)