True to her promise, the Bag Lady is sharing a picture of the snow that fell yesterday. For those of you in the warmer areas who want to see snow, but not necessarily first-hand, enjoy. For those of you who will eventually get some snow, here's a taste of what's to come! 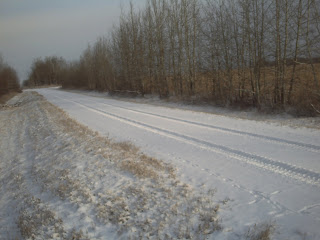 The Bag Lady had to do some ranch work this morning. Because of the snow, the Rancher decided that the cows needed to be fed, so the Bag Lady took 4 feeders and 4 bales to the cows. The Rancher knows that cows are inclined to wander if they don't think there is enough to eat where they are, so feeding them helps keep them happy and inside the fences!

When the Bag Lady was doing her nose count, she glanced over at old Marble and had to do a double take. This is what she saw: 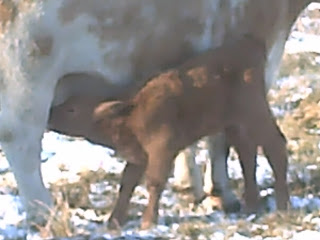 The Bag Lady had been working in the corral the day before and had seen Marble, but she didn't have a calf at that time. She must have been waiting for the storm!
As most of you know, the rest of this years' calf crop were all named for bloggers. The Bag Lady gave the opportunity to Marianne, who passed the honour on to her children. They chose to call this last calf of the season: 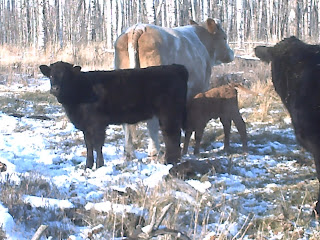 This is a comparison shot. The black calf (Mojo) was born June 8th. How quickly they grow!

So calving season has officially ended at Scratchnut Creek Ranch. Finally.
Posted by the Bag Lady at 12:01 AM

OMG! Autumn is so cute - and so late!

Well, at least marble is safe for a little while yet then.

DAMN they DO grow fast!

casts a glance at Toddler and is thankful...

What a happy surprise for you. Autumn looks like a fine figure of a calf.
As for the snow, well, it's thoughtful of you to start us out easy.

Reb - imagine my surprise! At least there was no trouble, and she is a nice, healthy calf!

Carla - don't they? You don't really realize it until something like this happens.

dfLeah - I was definitely happy that Autumn finally arrived! :)

Sweetness! That is a big Moo-er for a newborn....

TA - Bonfire Night? Fireworks? What is that in celebration of?

And BRRR that snow looks cold! I'm willing to wait a while longer before we get that!

Aw! What a nice surprise to find! I'm so glad, because I don't like the idea of you having to...uh...send Marble away either.

That border to the land of Vegetarian gets closer every day.

Bag Lady: I'm not sure, but I think TA was celebrating Guy Fawkes Day.

And I'm really glad Marble got to be a mommy again this year.

Sarah - I would have been willing to wait a little while longer, too, but guess there's not much I can do about it!

Javachick - I was really happy to see that little calf, too. In fact, I got so excited, I called the Rancher at work. He said Marble had just saved her own life.....
*gulp*

Tricia - I wasn't sure if it would be Guy Fawkes already or not - thanks!
And I'm glad Marble had such a good little calf, too!

Go, Marble! Us Old Girls can produce (although not, in my case, calves.)

Snow is so pretty until you have to work in it.

Wow, I didn't know cows calved this late in the season, at least not in cold climes like yours. (Almost-perpetual summer here, you know.)

Send along some of that snow if you get the inclination. Eight and humid is what I'm looking at today. Ugh. So un-autumnlike.

Never underestimate us old gals! Make sure to put pink tags on her, ok? LOL

So cute! Congratulations to Marble:)

I can't believe you have snow already- it's going to be 75F here today!

My mojo is getting so big. I will most def show to the hubby when I get home (he pretends to care that a cow thousands of miles away is named after our dog!)

Mary Anne - I was quite relieved that Marble came through again. Better a late calf than no calf!

BG - we don't ordinarily have them this late. Some ranchers start calving around Christmas - gives them a head start over those of us who take a more traditional path.

Wait until you see the pictures I'll be posting tomorrow! It is absolutely gorgeous here today!

Missicat - I'll do my best to get some snow to you, really I will!

Emily - your Mojo calf is almost as tall as your Mojo dog now! Hehehehe

Awwww, they are adorable! My grandmother used to have cows. When a calf was born, she'd name them after her grandchildren. Yes, there was an "Aleta" out there. Lol.

Little baby calves!!!! My parents live on a farm and they have cows too. I love it when they have babies. *sniff* I miss my parents.

And my mother-in-law was kidnapped on election day. Seriously. But we're working on it.

Guy Fawkes night! November the 5th! To commemorate the Gunpowder Plot, when Guy Fawkes tried to blow up the Houses Of Parliament many moons ago, but they caught him and burned him on a big fire. Every year we Brits celebrate it with fireworks displays and big bonfires with a "Guy" (not real person, a bit like a scarecrow) which we burn on it. And we have toffee apples and bonfire toffee and sparklers. It's a cute tradition but there's WAY too much fire involved for my liking! Very busy night for the fire service and hospitals :0(

those pics are so beautiful. We had a cold front come in last night and brrrr.........did you send it on down to us!?

Aleta - having a cow named after you is a great honour! :)

Melissa - Sounds to me like you need to make a trip home for a visit!

TA - Dangnubbit, I missed it again! I'll need a reminder next year to celebrate Guy Fawkes Day, 'kay? In fact, you might have to come in person and help me light the bonfire!!

Annette - I would never do something like that....well, okay, I would if I had any control over the weather! But only for a day or two to remind you to savour the warm days!

I'm definitely in the camp of "don't live near snow but like seeing it." I felt cold just looking at the pics.

Autumn is a great name and so cute. I'm glad the mom came through and had her calf. I would hate to have to say something like "That Bag Lady - did you hear? She's lost her Marble!" ;)

Hilary - that cracked me up! Thanks!