Today marks the 90th anniversary of the end of the First World War. The Great War, it was called. The war to end all wars.

Of course, we know now that it was not the war to end all wars.

The Bag Lady would like to take this opportunity to share some photos of her dad, who fought for his country during the Second World War. He was a telegraphist in the Royal Canadian Naval Volunteer Reserve.

Dad was a farm boy from Alberta who came of age toward the end of the war. He finished his training at Ste. Hyacinthe, P.Q. in 1944. (He is second from the left in the second row) 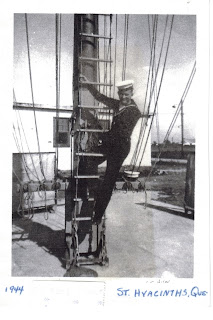 He went home on leave for Christmas in 1944. 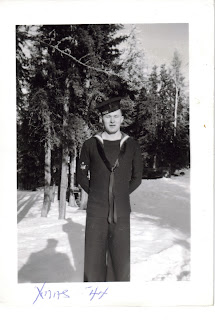 He served on three different corvettes during his time in the navy, patrolling the eastern coast of Canada and the United States. 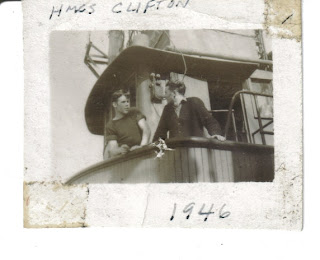 On one tour of duty, he was granted shore leave in New York City, so he and a fellow sailor toured around. Here they are on the Empire State building. 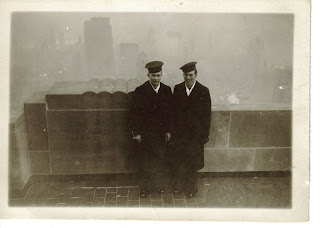 Toward the end of the war, his ship escorted a captured German submarine into Halifax harbour. 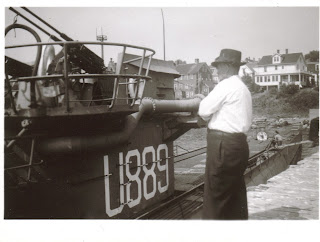 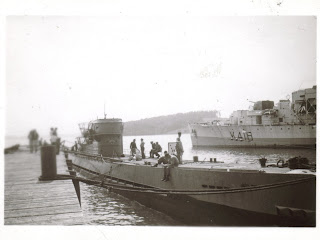 The Bag Lady still has his kit bag, and some of his uniforms and other memorabilia. (If you click on the photo of his kit bag, you can see a drawing of a 'dream girl'!) 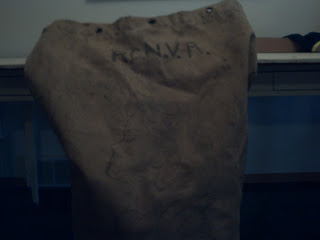 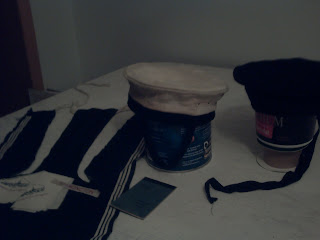 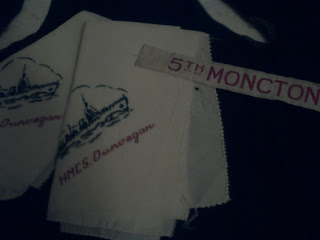 Dad didn't talk a lot about his tour of duty, but he was proud of having served his country, and I am proud of him, too. If it hadn't been for WWII, there would be no Bag Lady, for he met her mother in Halifax!

His is just one of the hundreds of thousands of stories of men and women who served their countries, and we should all take a moment today to remember them, and the many who paid the ultimate price for their countries.
Posted by the Bag Lady at 12:01 AM

Well, done Sis! I have his dog tags and release papers. I also have the training slider for Morse code! I didn't find the things we talked about earlier.

our grandparents/parents, aunts, uncles and all the thousands of men and women who went to war to give us the freedom we have today must always be remembered!!

really well done and I love you enough to say that I had forgotten.

and am duly embarrassed and THANK YOU for sharing all that via your post.

Yay Dad! My brother also served in the Navy, but doesn't talk about it. Great photos!

What wonderful pictures. Thanks for sharing with us!

Great post, Bag Lady! My grandfather served in Korea, and my father in Vietnam. I wish we had more pictures and memorabilia of those eras, even if they weren't happy memories. We do have some uniforms and letters, but that's about all that survived.

My husband did a tour of duty in Iraq a few years ago. I always appreciated the history of Veterans Day, but it never hit as close to home until 2006, the first year GP was back from the sandbox.

Thanks so much for your reminder to celebrate and honor their sacrifices of time and service!

WOw - thanks for sharing all the pics and stories.
Dad was in the army during the Korean war (in a MASH unit, no less!) Thanks, all the dads, moms, grandparents, siblings and everyone else that served!

Great post, it really makes one remember sacrifices their family members made, as well as the sacrifices of others.

Although it seems that your father was rewarded for doing his duty (such a good story!)

Four of my great-uncles were in WWI. My grandfathers were both married with children by then.

My father also met my mother as a result of where he was stationed in WWII.

Reb - thanks. I wanted to do more of a post, but was unsure of some of my facts.

Lor - thanks! We must always remember!

Miz - I'm glad I could remind you.

darksnark - thanks. I had so many pictures, it was hard to choose.

Sarah - thanks so much.

SB - I am really proud of my dad, so could have added far more pictures!

Gena - kudos to your hubby! We must never forget the brave men and women who served their countries.

Missicat - I hope you have some photos of your dad in the service!
And that you'll share them with us.

Tricia - there are many, many people who share a similar story. The two world wars really shook things up in regards to population distribution.

Mary Anne - my mother's father served in WWI - he was shot in the elbow as he crawled out of a foxhole. The bullet traveled up his arm and took out the muscle. But at least he survived.
Two of my great uncles on my father's side also served in WWI. So many lives have been touched by war.

Beautiful. Those are great photos- and the drawing of the girl is so lovely!

Today my thoughts are with my grandparents.

Thanks, Sagan. And that's a good place for your thoughts to be today!

Thanks for the reminder Bag Lady. I see that Veterans Day here in the US is celebrated as Remembrance Day in CA. I'm glad our countries honor & remember the veterans on the same day...it just means that much more support!

Hilary - you're welcome. I'm sure this day has special meaning for you.

Emily - here's hoping that everyone will always remember the bravery of young men and women everywhere - including your brother!

Wow, what a handsome fella your pops was! (am I allowed to say that? is that weird?)

Thanks so much for sharing the photos Bag Lady! My grandpa fought in WWII, he's a bit hazy now but he still likes to share his memories from us. I hope I can pass them on to my children someday, lest we forget. So much bravery, and so many lives lost.

I don't blame your poor mother one bit. What an irresistible rascal he was in uniform!

Thanks, Clare!! My mom was no slouch in the looks dept. either! They made an attractive couple.

What a handsome man! I loved the dream girl drawing. I can see why you are proud of your father. Bless him for his service!

Thanks, Aleta!
I love that drawing, too!

Wonderful post.
I went to the remembrance ceremony in town yesterday and was proud to be with everyone who had someone to remember. J's dad was a veteran of WW2...
It's amazing you have all those things to remember him and his time in the war. I love the drawing on the kitbag :)

Geo - good for you for going to the ceremony. And for honouring J's grand-dad.
There are more drawings on the kit bag, but I couldn't get a good photo of them!

BL,
I am awed. I am a huge supporter of our current and past troops. I take every opportunity to thank veterans when they make themselves know by either their uniform or a baseball hat with insignia. I have read all about WWII, both my father and grandfather served in the US Navy and for 3 years I have been writing to a young man in the Army whom I was lucky enough to finally meet this past year! I loved this post and am so thankful for people like your granddad. Thank you for posting the lovely photos and history your family is so proud of. And thanks for reminding others of all the brave men and women there are out there.

Lucas - thank you! And I'm sure the young man in the service whom you have befriended appreciates your support! How very good-hearted of you! You should be proud of yourself.

Thanks for this wonderful post. So many people passed through New York during WWll. I think we talked about this on an earlier post. Yours? Mine? Who cares!

the important thing is that they serves us so well and that will never be forgotten.

dfTerrie - as long as I draw breath, I will remember the sacrifices made by all those brave men and women!