Something fell to earth yesterday. The Bag Lady didn't see any bright lights in the sky, but it was all over the news last night, and she's very curious to know if they will find anything today, after the sun comes up.

There were some really cool videos of this event - especially one caught by a camera in Calgary, and the Bag Lady really wishes she had seen it for herself. *sigh*

She hasn't had a whole lot of excitement on the ranch this week. Having spent the majority of the week sleeping off the flu, she doesn't have much to tell you.

She saw an interesting idea for a meme over at POM's yesterday:
1. Find the 4th folder on your computer.

2. Find the 4th picture in the folder.

3. Publish that picture with an explanation of what's going on.

The Bag Lady had a little trouble with the rules for this meme, mostly because the fourth folder on her computer only had 3 photos in it! She compromised by picking the first picture in the next folder..... 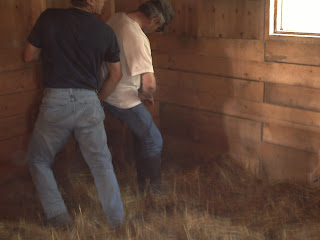 This is a picture of the Rancher and his brother, taken in the barn during the calf "doctoring" session. There is a calf in front of them, up against the wall, and the Rancher is putting a tag in its' ear. His brother has the shitty end of the deal..... (click on the photo to enlarge it for more detail - in fact, I insist you click to enlarge - there really is a calf there!)

As for the last rule of the meme - the Bag Lady will not single anyone out, but if you want to participate, feel free!

Have a good weekend!
Posted by the Bag Lady at 6:30 AM

lol I'm glad you said there was a calf in that pic. I couldn't see it at first glance and my mind was reeling as to what kind of a pic you were posting!

I knew it was a calf because I know you don't have any goats or Great Danes....
I'm finding that meme a little confusing, though. The fourth folder counting from where? From the top level down, I come to a folder which has no pictures and the fourth item is something called infoplist (a preference file for...Something.) Not too exciting.

Annette - it's still dark here, so I don't think anyone knows yet - if anything is found and they inform us, I'll post about it!

Hilary - I know! The calf is so small, it only shows if you enlarge the photo!

Mary Anne - I had that problem too, so I finally decided it meant the 4th folder in My Pictures folder....which also happened to be empty, so then I went to the My Vidoes file, which has some pictures in it as well. Imagine my chagrin when there were only 3 pictures in the 4th folder! *sigh*

dfBag Lady - I'm curious about the comet, too. Haven't seen any video yet.
The fourth folder in My Pics is some of Mike's stuff. I'll either post that one of these days or I'll take the fourth folder that has my photos in it.
That said, I didn't see the calf at first. Good thing you explained.

dfLeah - I hadn't looked that closely at that photo when I took it, but when I chose it for the meme, I realized that it really DID need an explanation!

I'm very curious to know what fell from the sky last evening. (CTV had a really good video taken at their Calgary location.)

I may do it the post the picture thing. And I saw that there was *something* in the pic, but had no idea what it was until you said calf.

Tricia - Guess it was smart of me to post a picture that actually needed an explanation, then..... right? :)

Neat picture. Sometimes I kind of wish my mum still did large animal. I have a couple memories of going with her when she was delivering calves and such but I was really young so those memories are pretty faint.

Im a child as I still think they were really peeing in a corner in the photo :)

Sagan - We'll be starting our calving in March - feel free to come out and give us (me!) a hand!!

Well, I don't have any folders in my picture folder. Not here at work, and the internet is down at home. The 4th picture in my folder here at work is ScottieDog petting kitties!!! Definitely worth a look, so I think I'll post it at my blog!

And 1) are you feeling better, Bag Lady and 2) did they ever find out what fell??? Probably the errant Endeavor toolbag.

Melissa - I am feeling a little better, thanks for asking! Not 100% yet, but getting there.

And you could be right! There has been no word yet (that I have heard) about what they think fell, but perhaps it was that ever-so-expensive toolbag!!!

hmmm....in a strange coincidence, the 4th pic is the picture I use for my icon! So guess I don't need to post it!
Did the aliens have a good visit? Probably heard how polite you Canadians are!

Now I have to search the net - I was working last night during the news, so know nothing!

Great photo, when you enlarge it, it looks like something unspeakable is being done to that calf! lol!

Wow, that's so exciting about your alien invasion! What -that IS what you said, isn't it?

That picture looks crazy. I had NO idea there was a calf in it, Rancher looks like he's doing a wee against the wall.

Great meme! I might join in if I get a spare millisecond tomorrow inbetween writing, spinning, shopping and going on an ice slide...

Missicat - Guess this means Canadians are known throughout the universe for their hospitality...:)

Reb - CTV out of Calgary had the best video that I saw last night. And that calf probably thought what they were doing was unspeakable! It certainly bawled loudly enough - didn't like getting an ear-ring.

TA - Mayhaps I should have cheated and chosen a different photo? :)

An ice slide? Do you have ice there now?