Tales from the Garden

Here are a couple pictures of what the Bag Lady's been up to lately:

She picked some peas, which the cat had to inspect (he wasn't very impressed): 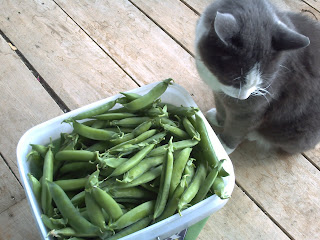 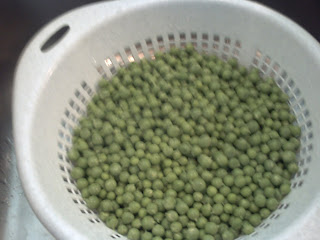 Then she blanched them and froze them, but didn't take a picture.

She has also been making jelly and jam, and working in the garden. It doesn't seem to matter how bleeping dry it is, the weeds will still grow! She has been harvesting lots of spinach and dehydrating it for future use. She dug some potatoes, carrots, onions and rutabaga the other day and used them in a stew with home-grown beef, and some of the fresh peas.

Some of her tomatoes are starting to ripen, and she has banana peppers that are ready to use. She's about to get really busy with canning! Might try pickling some of the peppers as there are so many!

She has a huge amount of dill in her garden - a whole row! - that is volunteer. She allowed some of it to go to seed last year so she could harvest the seed, and obviously didn't get it all... but now she has a lot of dill that she can't use because she didn't plant any cucumbers to make pickles. She will make some dilled carrots, and probably will dehydrate some and freeze some, but wow, there's so much! She'll have to search the web for some ideas of what else to do with it. Anyone have any suggestions?
Posted by the Bag Lady at 1:00 AM

Ooh cooking question! Dill goes great with white fish and salmon, if Bag Lady likes to eat the little swimmers? And generally with potatoes (boiled new with dill butter maybe...or a potato and dill gratin...) and things like peas and broad beans.

I forgot to tell you Bag Lady I am not a Saggitarius, but you weren't far off - I am a Scorpio (hence all the amateur dramatics and sweeping statements!)

Duh and yet who knew?

My latest longing (thanks for asking ;)) you & fitarella posting videos of yourselves singing.

Love,
M., who uses the proverbial bucket to carry her tune.

Wow those peas look good! And I love that MizFit comes here and dares you to do all kinds of wild things.

I would of course LOVE to see a singing video! ESPECIALLY if a costume and props of some sort were involved.

There is always dill seed. We haven't planted dill in the front yard for ages and we've still got it.
Echo Tokaiangel on the spud use and it goes in homemade ranch dressing if that's your bent.
Dill keeps, too, so don't worry about that at all.
Oooh, your home grown stew sounds so good.

TA - thanks for the suggestions! The Bag Lady is not much of a fish eater, but hubby is...
Mmmm - boiled new potatoes with dill butter sounds good!!
Don't know why I thought you were a Sag.... but Scorpio is good, too.

Carla - I've been trying to figure out how to get a DVD to load onto my computer so I can share with you. So far no luck, but I'll keep working on it. We'll have to work on Fitarella, too. Oh, and Susan at Nutrition, Fitness, Life is also a singer!

Crabby - the video that I am trying to load is all that - costume, props, audience, even!

dfLeah - I have loads of dill seed from last year, if ever there is a shortage, I'm well prepared!
Homemade ranch dressing sounds yummy!

No dill pickles? What a tragedy! I like to make a potato salad with dill and sour cream (because I am not a mayo fan), and put chopped dill in a salad with lemon juice & olive oil as a dressing...

My sister was making dill pickles for a while (when she had time, bcs my Mom stopped making them which is a shame because they are so much better than store-bought) and she would put some jalapenos or habanero peppers in with the dill pickles so they would be spicy dill pickles. They were awesome. Which still doesn't help you since you don't have any cucumbers.

I think I need more coffee.

Javachick - I decided against planting cucumbers this year because I still have lots of dill pickles left from previous years.
I was making a spicy pickle mix for awhile, too, but it didn't call for dill.
I'll have to try the potato salad with dill and sour cream - that sounds great! Thanks.

I have no dill suggestions, since I don't think I like it (nobody in my family ever grew it or cooked with it, so I'm not really sure) but has the cat never tried pouncing on pea pods and killing them? They roll in unexpected and challenging ways, or at least my dog thinks so.

Mary Anne - the cat has never bothered the peas - he's pretty laid back. Unless it's an actual mouse, or bird, or weasel.....he can't be bothered.
My golden retriever (who I still mourn) loved peas! He would sit right beside me when I was shelling peas waiting for me to drop one. Of course, he was also the dog who stood over the strawberry patch, waiting for the strawberries to ripen so he could eat them, too! Damn, I miss him.

mmmm....send it to me! hehe
After reading all the posts, I am HUNGRY!

missicat - send me your address....seriously! :)

Your kitchen antics sound great! And the cat DOES look so unimpressed in that first picture hehe.

Sagan - all the cat wanted to do was rub his chin on the pail! Wasn't the least bit interested in the peas.

Can't think of a damned thing to do with the dill Sis. Love the photo with the cat though.

I wonder if there are any herbal remedies that use dill. You could always dry it and give it to people, I guess. Get some cute jars, make up some artsy labels and give away the dill to people who buy your bags?

Cute pic of the cat and the peas. He definitely looks unimpressed. Too bad for him. Sweet garden peas are so delish-- my father's peas were ripe when I was in NM at the beginning of summer and it was nice to be able to pick my own snack.

BG - I might do that! The alternative, of course, is to just pull it all out and throw it in the bush! :)
I'm like you - love to pick peas and eat them straight out of the pod!

Once again, so, so jealous.

But next summer I will have a garden! Because my new house has a HUGE patio! I'm incredibly excited!

Oh, Christine! You found one? Woohoo! And with a garden!? Perfect.

WOw - I want to have dinner at your house with all that fresh stuff!

Oh I so love gray and white kitties!

I can't remember if your pork pita recipe called for dill in the cucumber sauce, but I put some of our fresh dill in it and it was very tasty.

I haven't made this, but it sounds worth trying and comes from The Joy of Cooking:

Warm 2 tablespoons of oil in a large skillet

Cook gently over medium heat until the ontions have softened. Then add:

Simmer, covered, until the beans are tender, about 20 minutes. Season with salt to taste.

Oooh, SB - that sounds yummy! Thanks for the recipe!

i always get edmame and peas confused.

Sydney - no such confusion here - I've never had edmame! :)

Sis, you had edemame at the Japanese restaurant when we were there with H&G, looks like peas in a pod.

Well dang, how could I forget! Thanks sis.

I'm not a pea eater. ha (that doesn't sound right.) But, the picture with kitty I do love.

Maggie - sorry to hear you don't like peas - I love them fresh out of the garden. And when I freeze them myself, they still taste pretty darn good. Canned peas? Not on your life!

Dill is great for Tzatziki sauce. If you drain plain yogurt through a cheese cloth or even a coffee filter and use the thicker yogurt for the base, you can add fresh or dried dill, seeded, blended and drained cucumber, lots of garlic and a bit of lemon juice. It's wonderful on pork and lamb.. or just as a veggie or nacho dip.

Oh, Hilary, that sounds delicious! Hmmm, do I have any yogurt? I know I have a cucumber one of the neighbours gave me......