The Bag Lady thought she should show you the progress in her produce.
Remember yesterday she said she had lots of volunteer dill in her garden? Well, here's a picture. She did not plant this, it came from seed that fell from her plants last year. The seed was spread all over the garden when it was tilled, but she has tamed it to mostly one row:
(Click on any of the photos to enlarge them) 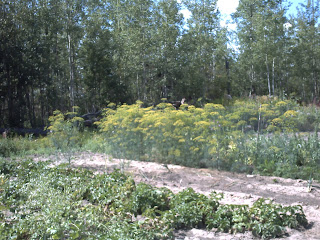 On the deck, her peppers are doing fairly well: 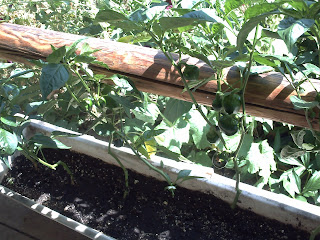 Here are some of her tomatoes...she got scissor-happy and trimmed off a lot of the excess foliage. She read somewhere that it will help the tomatoes grow larger: 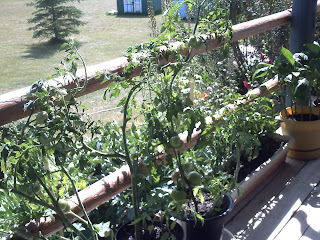 Here's a close-up of the ripest one: 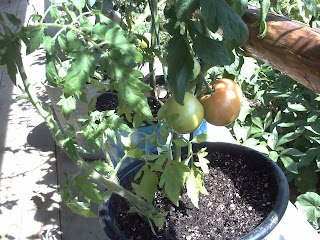 Here are the rest of her tomatoes: 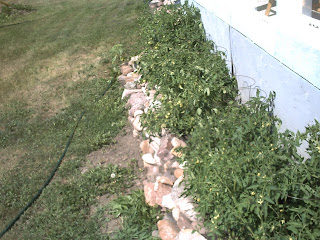 Here are some more peppers: 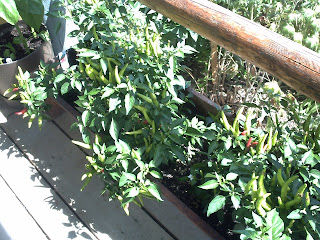 Oh, and the banana peppers: 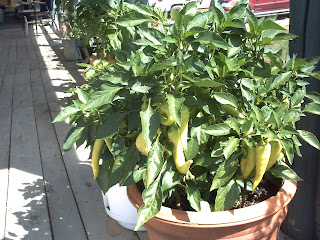 This is her grapevine, which surprised her by coming back after that nasty unexpected frost at the beginning of the summer:
This was taken shortly after the frost, when she realized the vine had survived: 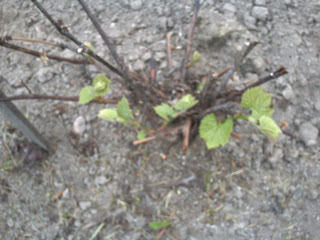 And this is what the grapevine looks like now. Doing quite well, considering, don't you think? 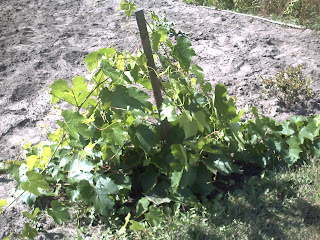 The tomatoes weren't the only thing she got scissor-happy with! She was so hot when she was working in her garden the other night, she decided she couldn't stand it any longer, and took the scissors to her hair! She has trimmed her bangs on other occasions, but has never attempted to do her entire head. Here's the result: 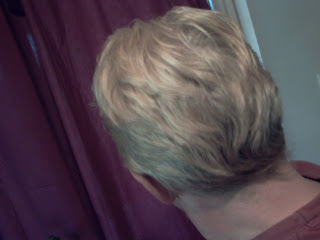 She sees now, thanks to this photo, that she needs to do a wee bit more trimming! But her head is cooler!!
Posted by the Bag Lady at 1:00 AM

What a lovely head! I think you did a damn good job - it looks very neat to me. I wish I could wear short hair, but it makes me look like a mushroom.

Pruning tomatoes is a necessity for growing them in colder places like over here, otherwise the fruit just wouldn't grow at all (as my friends and I discovered when she started growing them in her back garden!)

you
are
so
me.

I totally cut, err, prune my own hair---to everyones chagrin.

have a great day...when we getting the 'other' post?
(wink)

TA - thanks! Short hair makes me look funny, too, like a pea sitting on a pumpkin...
I have tried both methods with the tomatoes, and think it does help to prune them.

Miz - you do that to your hair, too? Hehehehehe. The "other" post may appear soon....mayhaps needs to be as a guest post somewhere else.

I am impressed - your hair looks great! I haven't tried to cut mine myself, but I am now coloring it at home. Turned out pretty well - just cannot afford the large hairdresser bills any more...

Missicat - I've been colouring mine at home for many years. I'm all about saving money.
As far as the cutting goes - I was too lazy/busy to go to town, and just couldn't stand it any longer. Besides, it grows so darn fast, in a few weeks it'll need it again.

A most impressive forest of dill, df Bag Lady. The near-ripe tomato looks so good. Everything looks good and that includes your haircut.

Thanks, dfLeah! I am so looking forward to that tomato...you have no idea! Nothing beats home-grown.... :)

Wow, that haircut is impressive! You can't even tell it's self-done.

I used to trim my own bangs when I was in highschool but nothing beyond that. Oh, and I trimmed John's hair once when a so-so haircut he'd gotten a couple weeks before transformed into a pseudo mullet and he got sick and tired of me inferring that he was in a Michael Bolton tribute band...

I honestly can not wait until next summer, when I too, can post pictures of my tomato plants. Hopefully they will not be dead.

So not true, either.

You cut your own hair? So daring! It looks great.

That's so cool how your dill just spread everywhere on its own. And my dog once attacked a geranium plant- literally just about ripped it to shreds- but the next year it grew back so big and bushy and beautiful, it was incredible. So maybe your tomatoes will react in the same way!

Christine - thanks! I took a hairdressing course many years ago, and always cut the Cowman's hair, but have never attempted my own before...
I don't blame you for being excited about having your own garden!

How did you get the back of your hair so even? I can only do that if my hair is below my shoulderblades, which it isn't. So when I do my own trimming, I end up uneven and lop-sided. :-(

You are clearly a woman of many talents. Either that or you're double-jointed. Maybe both.

BG - I cannot tell a lie...I used a razor-comb. And a thre-way mirror. Oh, and I can detach my head. (well, sometimes it seems like I can, 'cause I leave it behind occasionally....) hehehe

Your banana peppers look yummy! For some reason my peppers just aren't cooperating : (

Thanks, Emily!
I don't know why my peppers are doing so well - they must like it hot and dry.....
Discovered one this morning that literally turned red overnight. Well, part of it.

Great dill forest you have there! It looks like you are going to be very busy with harvesting and canning Sis.

You're too talented! Is there anything you can't do? Great shots of a fine garden and very impressive haircut!

Great haircut! I used to trim my own hair in college, but I don't think it looked as good as that!
I can't believe the rag on the cat story! The bears are getting much too close for my comfort around here seeing as Dave had to shoot in the air to make one(possibly a grizzly,cinammon-colored,but could have been a black) Seeing as we had our two dogs with us, we are glad he turned the other way and disappeared! Great blog!

Thanks, chica! Good thing Dave had the gun with him - don't want to lose those dogs of yours! Or you, for that matter!!