Yesterday, the Rancher, his mother and the Bag Lady took some cows to be sold at the auction held today. The auction mart where they took their cows is approximately an hour away, and they noticed on the drive that there was a large police presence on the highway. In that hour, they saw 4 police cars. This area has been plagued with accidents in the past few years, prompting the province to provide sheriffs to help police the highways. They were certainly on the job yesterday!

After they delivered their cows to the auction, they decided to have supper at a cafe in the little town close to the auction mart.

Lo and behold, there were 2 police cars pulled in there, and the officers were inside, having their supper. Shortly thereafter, 2 more police cars pulled in. One of the officers had to walk past the table where the Rancher et al were seated on his way to the restroom. When the officer came out of the washroom, he stopped at the table across the aisle to invite the little boy seated there to come out and have a look at his police car! The little boy was about 7 years old, and seemed quite excited. The officer told him to come and get him when he was ready to leave.

The little boy and his family left a few minutes before the Bag Lady and her family, so when she and her mother-in-law exited the restaurant, the policeman was just taking the handcuffs off the little boy! The boy seemed absolutely thrilled about the whole experience and the Bag Lady couldn't help but think what a good P.R move that was on that police officer's part!

The Bag Lady took a few photos on the trip, mostly to show her sister, Reb, who blogs over at Sibu Pegasus Power, how much the city has expanded since she was here last. Unfortunately, the photos aren't very good. If it had been dark, the lights would have shown up nicely.....

This was taken from the top of the hill (which, by the way, is nowhere near as high as it used to be - they cut it down quite drastically when they twinned the highway): 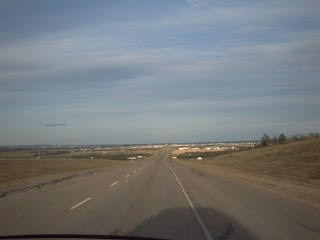 New intersection between Costco and the airport: 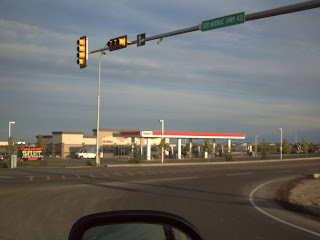 Here are some gulls taking flight from a field outside town: 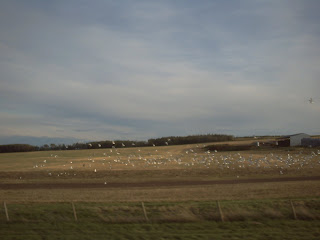 Here's a little video clip of the new construction in town:

Sorry if this post is a little boring for everyone else.... the Bag Lady will try to have something more exciting tomorrow.
Posted by the Bag Lady at 3:00 AM

Im the person who ADORES and is so curious about other people's lives and worlds (and yes towns).

so not boring here :)

I know my Tornado would have LOVED the chance to see he police car (fingers crossed she never does unless it's a PR MOVE :))

Aw I think it's helpful when the cops do that sort of thing - we could do with much more of it in our country to encourage understanding between the police and the little people. Kids round here just think the police are the enemy!

How do you feel about the expansion, Bag Lady? What sort of exciting new stuff will you be getting in the city?

Wow, they really did cut the hill down. So, is the airport in the city limits yet? Yes, I am still up, not up early - trying to reset my clock.

Cute little story about the cop and the kiddo. :)

Mifit - I'm glad you weren't bored! And agree with you whole-heartedly that the tornado never see a police car unless it's a PR move!

TA - I really thought it was quite brilliant...the little guy seemed quite pleased, and it allows them to see the police as people!

The expansion? On the one hand it will be nice to have some of the shops that are advertised on the signs (RONA is a big Canadian home-improvement store, which is exciting for me), but the city has changed a great deal over the last 10 or so years, and it's much busier and more dangerous (over 1000 motor vehicle accidents this year!), and, sadly, far more expensive....

Reb - I failed to notice the city limit sign there, but if the airport isn't actually within the city limits, it is right on the border. There is a large industrial park on the north side of the highway that stretches from the airport almost all the way to Costco.

SB - sorry about the bird pictures lately.... I know you aren't fond of birds!

I second what Mizfit says - I love hearing stories about different places...that was nice of the cop to take the time to make that little boy's day. Probably wouldn't work so well in my area
:-)

Missicat - I've heard that DC has a terribly high crime rate - one wonders how young the kids would have to be to be thrilled about a tour of a police car..... sadly.

Will the city ever stop? Thanks for the quick tour.
And that was a really good move on the Cop's part. Good for him.

dfLeah - the city seems to have taken on a life of it's own, so to speak. When we first moved here (OMG, so many years ago!) it was a typical little prairie town with grain elevators and friendly people. Now it's a frickin' oil boom town and it's nasty. Expensive? Full of rig-pigs (and they truly are pigs!), hookers, crime..... don't get me started. Oh, wait, I already started.
Okay, I'll stop.

Oh, I am so tired I forgot to say thanks for the link!

Good for that cop too.

Reb - you're welcome! Get some sleep.

Reminds me of Manitoba, when the fire department would give rides to kids one day of the year... the one day of the year there was an actual fire and they had to drive us back to the shopping centre parking lot with the sirens on!!

I belonged to a mom's group in Alabama and they always had great trips to the police station, fire dept, post office, etc. I think our children need to see everything not just the water parks and pizza places with a dancing mouse ;)

It's never boring to see what's going on in your world. :)