Okay, okay, the Bag Lady knows she said she was going to take the weekend off from blogging because she was going camping. But that was before it poured rain yesterday. And before the Rancher had such a long day at work that he fell asleep on the couch right after supper. If it dries up today, they may venture forth on a camping adventure. There is frost in the forecast for Sunday night (Gah, can you believe it?!) and the Bag Lady is undecided about what to do. If she goes camping, she will have to pick her tomatoes before she leaves so they don't freeze. If, on the other hand, she stays home, she can cover her tomatoes to protect them, and they will have more time to mature on the vine. What to do, what to do....

In the meantime, she wanted to share a few photos with you of her garden produce.
Here are some of her tomatoes: 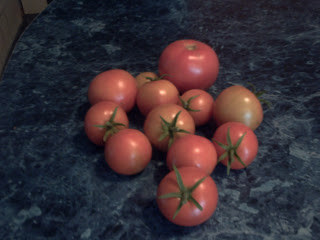 This one was delicious! 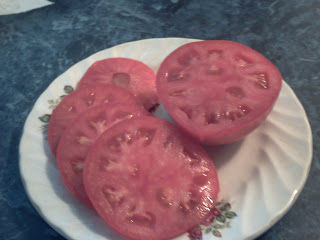 This is one of the survivors of the late frost we experienced in July. Isn't it huge, and beautiful? (The Bag Lady is hoping it is one of the Pink Ponderosa variety - they are so pretty!) 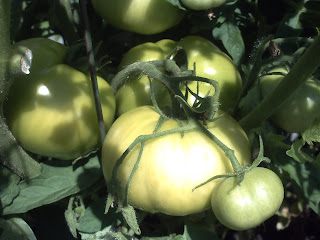 And here are some of the peppers she is planning to use to make hot pepper jelly: 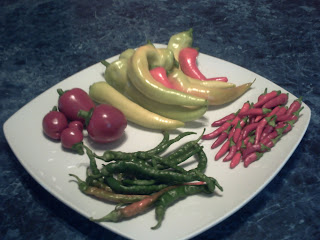 The round red ones are not supposed to be very hot, and neither are the banana peppers. The green ones are Cayenne peppers and were accidentally broken off during a wild Frisbee episode with the Princess and the Rancher's almost-two-year old grandson! No big deal - they will be fine just as they are! The little red ones are called Super Chilies. The Bag Lady has never grown them before and has no idea how hot they will be. Well, except that the little stick that came with them from the nursery says they are hot peppers.
The habaneros are starting to produce. The Bag Lady is afraid of them. She found a recipe for a hot pepper jelly that is called Habanero Gold. Sounds interesting, doesn't it? Also might cause your head to explode....
Posted by the Bag Lady at 3:00 AM

Peppers are so cool. It wasn't until I worked on the lettuce farm that I found out you can even grow peppers in Canada - I thought they were one of those strictly hot weather produce things.

I don't know if it's possible to grow them in Ireland, though.

Looks like you've picked a peck of peppers to pickle. Nice looking bounty, Baggie. So are you home or did you go camping after you posted?

Christine - I don't see why they wouldn't. Of course, I buy them as bedding plants from the nursery, and grow them in pots on my covered deck. I've never planted them out in the garden.

Hilary - it poured rain, and we weren't quite ready (didn't have everything loaded into the camper yet) so we aren't leaving until later on this morning.
Have a few things still to get ready (rubber boots....winter coats...tarps....)

I can almost taste those tomatoes. Fresh tomato off the vine is the most bestest thing ever.
May I suggest you go ahead and pick you tomatoes? They'll ripen fine under some newspapers in a dark cool corner and you won't have to worry.
The peppers are awe-inspiring. Please wear gloves when you handle them. I know you know that, but a reminder never hurts.

dfLeah - I'm thinking that picking the tomatoes is a good idea. Then I won't have to worry about them anymore.

And I found out last night how hot those little peppers are. The friends we are going camping with made it here with their motorhome, and they shared one of the peppers. When the sweat stopped running down his face and after he stuck his head in the container of sour cream, his girlfriend said "I didn't think they were all that hot, did you?"
I'm sure the blisters on his tongue will heal, with liberal applications of beer......

I'll definitely be wearing gloves. Maybe I can borrow some from a fireman.

All the home grown produce looks delightful! You have done an awesome job photographing it too. The hot pepper jelly sounds speecy-spicy!!!! Hubby love spice.....I am a baby about it. I usually have to choose mild salsas! I hope whatever you choose to do for the weekend is fun and you relax a little :)

It all looks lovely Sis, if not exactly appetizing to me. Have a good camping trip.

I had some when I was up at Bard, somebody bought them at the local stand. Golly they were good. Why I even buy them for hamburgers at the store I don't know. Force of habit I guess.

Ohhhhh, now I am going to have to go buy me a mess of peppers and try my hand at making jelly. Had some red stuff and jalapeno at school the other day poured over cream cheese and eaten w/pretzels. YUM. I've never made it, but I think that will be this year's experiment! Thanks for the inspiration.

too Toddler to a festival (bat fest!) yesterday and nearly melted in the 100 degree heat.

I'm jealous. It's been ages since I've had a truly tasty tomato and it looks like you'll have a...bagfull.

Sorry. Hilary made me say it.

Have a great camping trip and wear your rubber boots so you don't get web feet.
re: If I had a million dollars (I know, late reading your previous day's blog)...but thought this would give you a chuckle...I was surfing the net last night around 9:00pm waiting for the news and came across a Bare Naked Ladies Concert on a PBS channel..turned on and up the surround sound and watched them for the "first time" no breaks just about 30 songs in 45 minutes - none of which I had heard before - and then at the end .. last song - you guessed it "If I had a million $$$$...they changed words and made it fit the Minnesota crowd, but what a crowd they had - thousands cheering and singing along.

Hope you had a fabulous time camping!

The peppers look fun! I hadn't realised they were chilli peppers (I always forget that what we call peppers you guys call capsicums). What on earth would you put hot pepper jelly ON though? Isn't it like what we call jam, so would you put it on toast? That sort of doesn't seem to quite work...

Hope you're gone now and that you've managed to salvage something of your camping trip!

hope you are having a great time.

video for us when youre back?

of the cowwhisperer (wink) in the wild?

We're Ba-a-ack!!!!!!!
Thank you all for your comments! The Bag Lady has much unpacking and cleaning and sorting to do, and has to run to town to catch up on some real-life stuff, but she'll be posting something soon to tell you all about the camping trip.

New*me - Thanks! I have to start with mild salsa and work my way up to get my mouth accustomed to it when I haven't had any for awhile!

Reb - I know you aren't a fan of tomatoes or peppers, but they do look pretty, don't they?

Linda - glad to be an inspiration to you! (hehehehe) Thanks for stopping by and commenting!

Mizfit - we could have used a little of that heat on our camp-out, but we just huddled by the fire instead!

Frank - that Hilary....she is such a bad influence on you!

Cuzzie - glad the jam is good! That is a great song, isn't it?

TA - you can put hot pepper jelly on meat, but my favourite is to pour it over a block of cream cheese and serve it with crackers. YUM!

Crabby - are you back yet? I don't want to say anything too loud in case you aren't! We had a super time - how was your trip?

Miz - Had a great time - took tons of photos and videos - hoping we weren't so drunk that there is something in focus!

mmm...tomatoes look great. I think I am a little afraid of habaneros too....

Missicat - thanks! We covered the tomatoes before we left, so they are okay, but it froze pretty hard every night we were gone and the tomatoes on the deck and the very tops of the habaneros were touched with frost.
Sigh.