The Bag Lady had a very busy day yesterday. She lured the calves out of the hay yard with oats and, after securing the chain that they miraculously unhooked, she tied the gate shut for added security!

Here is the hay-yard after the calves were convinced to go back where they belonged: 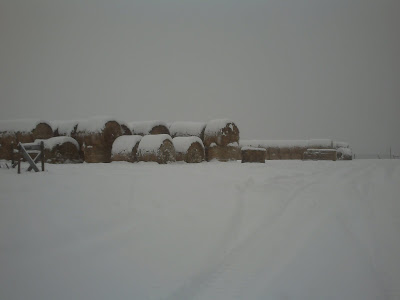 Then she fed the cows a bale of hay. 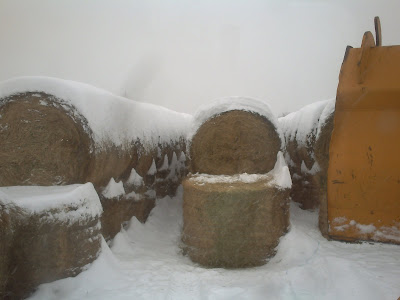 Then she ran into town for her physio appointment and some errands. The drive to town was fraught with danger (don't you love that expression? - always wanted to use it!!) as the road conditions were less than ideal. It was snowing light, fluffy stuff, which swirls around in the least bit of wind. Of course, big trucks on the highway create quite a bit of wind, so there was quite a lot of swirling happening, as there were quite a few big trucks on the highway. It was also very icy in places; especially at intersections in town. But the Bag Lady made it to all of her destinations with only a couple of near-misses (including one on the highway when two big trucks came toward her out of the swirling snow side-by-side, which meant one of them was, inconsiderately, using the Bag Lady's lane and almost side-swiped her!)

She heard on the radio that there have been over 130 accidents in this area in the seven days since New Year's Day! The population of the city is only around 50,000 people. WTF? Winter comes every year, you would think they would be accustomed to driving in winter conditions by now!

She was very glad to make it home safely, but had to turn around and go back out on the highway with the loader to take a bale to the horses who are pastured at the Rancher's mother's place. 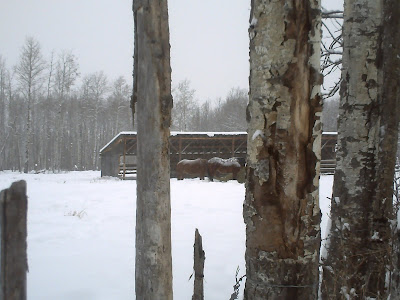 It was snowing even harder, but she waited at the highway until she was positive there was no traffic. The loader doesn't go very fast, and she is always worried she will be rear-ended. Fortunately, the worst thing that happened was a big tanker truck passing her so fast that she was blinded by snow for long enough to piss her off! 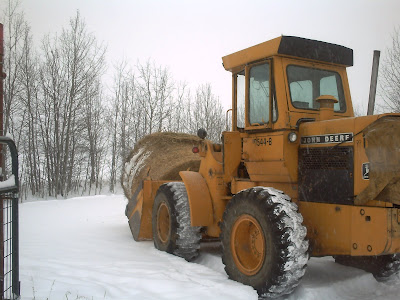 Once she was finished with the ordeal of driving on the highway, she fed her cows another bale because it had snowed enough to cover the first one.

She was a wee bit surprised to see that the cows had a couple of visitors: And even more surprised when, despite the noise of the loader, they were joined by another: 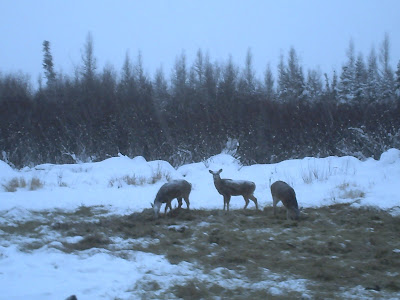 Here is a wee sample of what the driving conditions were like:


The Bag Lady had to stop filming in order to concentrate on driving! This was NOT filmed on the highway, BTW - this was on the side road just when she was leaving her driveway.
Posted by the Bag Lady at 6:50 AM

Wow, I'm glad you made it back okay.

And I felt chilly just looking at those pictures!

Let's see now, you're just back on your feet from feeling under the weather and driving among maniacs while the roads are poor and then to top it off, you use a bucket loader to get feed to your cattle. Gee, Bag Lady, sounds like a normal day for all of us. :)

I don't know how you do it.

Every time I think I've had a tough day or I've had a lot to do I remember your ranch day posts.
Perspective is all.

Tricia - Thanks, I was pretty happy when I finally got home safe and sound!

Tom - If you had known me before I moved out here, you'd be even more impressed!! I was the quintessential city girl.

dfLeah - Meh - you've been there, done that with a lot of it, except you were younger!

Wow, another day in the life of Bag Lady! I feel positively indolent! So glad you're feeling a bit better, hope the physio did some good...

Looks chilly!
Our weather forecasters here are terrible...today was supposed to be in the 40s and sunny...just looked out my window to see snow falling. Last Sunday it was supposed to be freezing rain. It was sunny and beautiful.
I want that job!

Thanks, TA - I AM feeling better. Now if it would warm up and stop snowing!!!!

Missicat - I don't remember hearing that it would be snowing here today, but could be I just blocked out what the forecasters were saying! :)

Brr, that looks awful! Stay at home and warm up and be safe.

...dammit, though. Now I don't feel justified in complaining about the weather around here;)

Oh, Sagan - go ahead and complain! I watch the weather channel, so I know it's been nasty where you are, too!

Glad you're doing better, and you came back safely. Sorry that I haven't been commenting lately. I have been keeping up with you through blogger reader. My thoughts are with you. {{Hugs}}

Thanks, Maggie! Good to see you, and I totally understand - life is busy for all of us!

Oh deer! It is cold and miserable looking there. Those are the days I hate the most, when the sun doesn't really ever come out.

Glad you are feeling better and a good enough driver to avoid all the asshats on the road.

I'm always amazed at the accidents every year this time of year too.
It's like people forget how to drive...or maybe they just get in a hurry and forget to be careful enough...don't know.
I'm glad you're feeling better.
Sounds like there's no shortage of things for you to catch up on :)

Im such a nerd and fear accidents in a bigbadway.
I will hop on a plane at a moments notice---trust the air more than the road :)

the snow on the hay is so beautiful!

I love this post, Baggie. The photos are beautiful, the surprise deer are delightful and I really felt like I was along with you for the day.. only warmer.

Geo - there is always something to do! I had plans for today, but have had to change them - have to go back to town and pick up the Man in Black's truck for him!

Miz - I'm even a worse coward about flying than I am about driving! And yes, thanks, feeling much better. Bless my motivational partner and her yogurt suggestion!

Annette - it IS pretty, isn't it? A pain in the butt when it comes to getting the twine off, but it does look nice.

Hilary - thanks! It was a bisy day, so I hardly noticed the cold. Hahahahahahaha

I went back to New York for the holidays thinking I would have missed the snow after all these years--I haven't... With that being said, what amazing country and job you have. I'm in awe of your responsibilities each day.

Deer, I am used to seeing. SnakeMaster & I watched several at the bus stop (the end of our driveway) this morning. To see cows, I have to drive a few miles. Snow is much, much farther away.

I now feel like a lazy bum! However, I am also full of admiration at all that you accomplish on your ranch, Bag Lady! :)

Super! You're on the mend.

Thanks for sharing your pictures. Hearing about your day is always interesting for us desk folk. Being office-bound is no fun (for me anyway).

When Drew Remenda (SJ Sharks announcer) got stranded in Saskatchewan last Saturday due to below-freezing temps, I thought of you and the Rancher braving the same coldness. He did make it to announce for the game against the Flames in Calgary though. (SJ lost terribly.) Our local announcers were teasing that he'd have to get to Calgary by way of dogsleg.

I love looking at your photos -- they make me so homesick for the farm (but in a good way)!

Take care of yourself -- drive carefully!

Since we're moving to Chicago, I'm trying to appreciate your snowy pictures in a more real-world way. Today I'm appreciating that I will not have to be DRIVING in that stuff!

Brrr. I drove twenty-three miles (about forty-five minutes) to town this morning, with the temperature just barely below freezing and the inch of snow did not melt off my hood! Have the laws of physics been suspended? Does heat not rise? Does metal not conduct heat faster than air?

Gosh, I wish Blogger would let us edit our comments - I told Hilary it was a "bisy" day!! Hehehehe

David - I'm pretty sure I wouldn't miss the snow much, either! This is a terrific way of life - difficult sometimes; demanding, too, but very rewarding.

kcinnova - just wait until you see what the Bag Lady has in store for tomorrow!! :D

Conny - I'm glad you enjoy the pictures! And I always grin when I think about hockey in California - it just seems so... odd, somehow....

Thanks, Haley - I'm glad the pictures remind you of good times!

SB - Chicago will be quite a change from Texas, won't it? I'll try to post some more blustery photos to help you get ready for your move!! :)

Mary Anne in Kentucky - Obviously, if the snow didn't come off your hood, you weren't driving fast enough!! At least, that seems to be how some of the drivers around here deal with it!

Please be careful! I've never seen that much snow at one time in my life! Around here we shut down the schools if somebody drops a cup of ice at the McDonald's drive-thru.

Amy - that totally cracked me up! Thanks. I'll be very cautious, I promise.

Oh my goodness, be careful out there!

That's an alarming amount of accidents.

(I know YOU'RE careful; I just worry about you running across someone else who isn't.)

But I guess hiding under your bed isn't an option? Oh well...

Crabby - unfortunately, hiding under my bed is not an option, but if it were, you know where you'd find me!