Well, the Bag Lady had to go back to town yesterday. The Rancher's truck had a broken spring, so it was in the repair shop, and needed to be picked up.

The Bag Lady asked her good friend to take her to town. Her good friend consented. The Bag Lady bought lunch for her very good friend, and they had a nice visit. They did a little shopping, although neither of them actually needed anything, while they waited for the call to tell them the truck was ready.

The Bag Lady finally called the shop only to be told it wouldn't be ready for a couple more hours! The Bag Lady and her extremely patient friend wandered around a few more stores, then finally drove to the repair shop to see if their presence there would perhaps encourage the repair along. When they arrived there, they were told the repair wouldn't be completed for a couple more couple hours! The service manager very kindly offered to drive the truck to a place where the Rancher could pick it up if that would help any. So the Bag Lady and her incredibly kind, patient friend came home again, leaving the matter of the truck to be sorted out between the repair shop and the Rancher!

When the Bag Lady and her friend were almost home, they spied something straight ahead on the road in the distance. They were actually supposed to turn off the road, but when they realized what they were seeing, and the Bag Lady remembered that she had her camera in her pocket, they drove on to have a look. 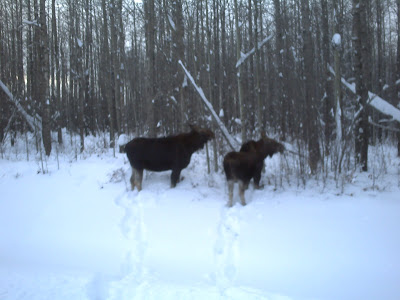 Mama moose and her calf did not seem to be the least bit bothered by the presence of the Bag Lady and her friend, and continued pruning the tasty little willows whilst the Bag Lady tried to take at least one decent picture. The Bag Lady's friend is an extremely talented artist who would paint a picture of these moose if the Bag Lady managed to take a good photo. ~~sigh~~ Of the half dozen or so photos the Bag Lady took, these were the best. 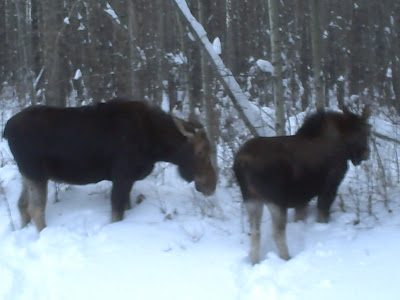 The calf was so intent on his dinner that he refused to pose for the Bag Lady, instead presenting his posterior in a rather determined manner! His mama at least acknowledged our presence, but seemed singularly unimpressed with the idea of having her picture taken. Of course, she could have decided that we were annoying paparazzi and gone on the offensive, but she chose the high road and ignored us instead!
Posted by the Bag Lady at 12:01 AM

OOOH THATS PRECISELY WHO YOU ARE, BL!
the Ranching Paps!

do you duck and shout at them?
interrupt the cows as they are simply trying to have a quiet loving dinner at the Palm?

you need your own magazine.

Uh-oh, maybe the calf didn't realise you'd already had your lunchtime willows and thought you were coming to take a bite of his!!

I still can't believe I know somebody who lives near MOOSES!

Very uncooperative and inconsiderate of the moose not to pose for you...Still, pretty amazing pictures.

We'll done. It's so nice to see moosies. I wonder, we've just had Christmas by the Julian calendar, maybe they're the Julian Chrismooses.

Miz - I actually did try whistling and talking to them, but mama mooses are very protective, so didn't want to rile her up - my friend's truck is brand new!!! :)

TA - he certainly did seem to be trying to gobble as many as he could - you just may be right! (yup, mooses, deer, bears, cougars, coyotes, ----oh, the Rancher saw a huge black wolf the other day, but he didn't have a camera. The Rancher, I mean, not the wolf. Having a camera, I mean. Oh, never mind.)

JavaChick - Just like typical Hollywood starlets..... But at least they didn't run, hiding their faces with a newspaper.... :)

dfLeah - you may be exactly right!! In fact, I'm almost positive I heard mama call her kid Julian.....
*groan*

Oh I love Moose! They are so darn gangly and adorable.

Nice end to a frustrating day. I love the rich brown colour of those critters. They must be chocolate moose. ;)

I'm jealous of the wildlife, although I probably couldn't do well on a ranch (I'm not good with animals at all).

So is the plural of moose meese?
Mooses?
Mise?
Inquiring minds want to know...

SB - I feel the same way! Not everyone thinks they are cute, but I do!

Tricia - there's always grain farming if you have a hankering to live in the country! :)

And seeing the moose made that frustrating trip worth it, didn't it? :)

Makes me really miss hiking. Used to see all kinds of wildlife... I really should get out of the city more often.

Sagan - it did, it did indeed! Love me some mooses!

Dan and I went to VT several years in a row and it became a little joke between us that *this* was the time he was going to see a moose!

Lucky you, and thanks for the pics!

Oh, repair shops are so frustrating! Thank goodness for patient friends and then you get the bonus of seeing such a beautiful pair of mooses!

Bag Lady- I'm sorry to hear about your troubles with the repair shop, I think those people run on their own time (lucky for us, right?!?) Oh, and that is so cool that you saw mooses! I hope you are feeling better.

Oh, and luckily I just read your responses and the plural is moose. I think that's dumb, I'm going with mooses : )

BG - that's too bad that Dan never got to see a moose! Hope he can get a look at these two!

Reb - It certainly was annoying that the repair shop took so long, but we had a fun day in town anyway!

Emily - glad you like the mooses! :)
And yes, thanks, I am feeling better!

I've only ever seen two moose in my lifetime: once on Isle Royale (in Lake Superior for those who've never heard of Isle Royale), and the other in Utah, of all places. Very cool that they let you close enough for pictures. Which reminds me...

Both you and cousin Leah inspired me to buy a digital camera of my own last week. Going to play around with it this weekend. Thanks for the inspiration. :>)

Great, Conny! I'll have to stop by next week and have a peek at all the photos you'll be posting!! Err.... you WILL be posting photos of nice warm weather and greenery and stuff, right? I may end up hanging out at your blog for a really long time..... :)

This is Redbush talk'in atcha! I can't imagine that it was a day almooost wasted when you actually bought lunch for your very good friend, and had a good visit. I mean, look at it this way, you both had a great time shopping and visiting. To top it all off, you got some very precious pictures of mama moose and baby even though he, or she would rather eat and present his or her posterior. I was just running a vision in my head of what the baby's thoughts might have been while they were nibbling, and at the same time keeping the two of you in the backs of their mind. " You would think these two humans would have something better to do with their time than hold up some mechanical thing and sit watching us eat. But, on the other hand, we are two of a kind, and who wouldn't want to look at something as special, beautiful, graceful and amazing as us! Oh, well, on with the willow-nibbling. Mom and I are good at ignoring the little sounds the person with the mechanical thing in their hand was making when she was trying to get our attention."
Hey, that just could make a good painting if the talented painter friend of yours can imagine what their faces might look like looking into the camera. I can't really see, or imagine anyone being anymore talented than the rancher's wife, though! This is another day in the life of a snow-shoveler in our great north country. I may be saying some choice words if it snows again after I spend two hours shovelling off the deck, and the dog trails. The snow giant covered all my trails that my husband and I shovelled yesterday! On the other hand, I know I need the exercise!

My sister once got a lovely pic of a mama and baby moose (side view) in the summery Alaskan woods. This was before I knew not to mess with moose.

Hello Mrs Redbush!! My friend and I certainly did have a good time visiting, lunching and giggling our way through the check-out at the grocery store.....:)
Mama and baby moose were just the icing on the cake, so to speak! Maybe next time I can get a better picture for my talented artist friend.
Here's hoping it doesn't snow on your dog trail for a day or two! :)

Kcinnova - I'm hoping I'll have another opportunity some time soon to get a better photo. And it pays to be cautious around a mama moose with a calf!

Glad you're feeling better, by the way!

Moosies! Such cute moosies! Maybe it's because we don't have them here that they seem so adorable. Wonder if anyone has ever tried domesticating them?

Crabby - I think housebreaking them would be a wee bit difficult! Actually, somewhere in the back of my mind, I remember hearing about some old guy who lived back in the bush who had a pet moose. Found an orphaned calf that he raised..... not sure he was house-broken, though! (the moose, I mean, not the old guy...)

I saw moose three times on a trip to Cape Breton a few years ago and it was thrilling each time.

boots586 - They are majestic animals, aren't they?
Thanks for stopping by!

Faintly coincidental... according to my journal, on Jan 10th I began reading 'Intensity' by Dean Koontz. Near the end of the novel there are elk roaming the forest, and though they were normally wary of people, on this occasion they were hanging around, watching people and walking up close. I can imagine it would be spooky... something normally runs away, but suddenly it's breathing down the back of your neck.

diddums - I'll say it would be spooky! Have you ever been up close and personal with an elk? They are BIG!
Thanks for stopping by!