The Bag Lady has been head down and butt up for a couple of days now in the final push to finish some crafts before the weekend. She has had some successes, but has also had a couple of problems (if whatever she is working on doesn't turn out close to perfect, she won't sell it)

She will try to post some photos later, really!!


In the meantime, here is a photo of her friends' dog, sleeping in their other (much smaller) dogs' bed and using a conveniently placed stuffed toy to rest his chin! He used to sleep in it when he was a pup...... guess he figures it SHOULD still be comfortable: 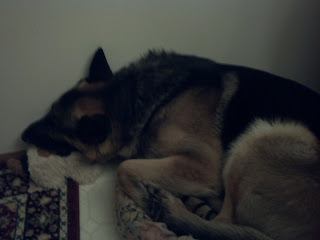 And a little video for the dog-lovers out there:

I have a similar picture of my little Finn stuffed into a cat bed. :)

That kind of focus and single-mindedness is so Bennyesque. If it weren't for the great difference in breed/size, I'd swear that they share genes. Really cute vid and pic.

What IS it with dogs and sticks? It doesn't seem to serve any evolutionary purpose. What a silly pup!! So cute though.

Love the phrase "head down and butt up" I'm going to use that one!

awwwww....pets always think they can fit into anything for a nap!

Geo - isn't he? He's the friendliest and goofiest German Shepherd I've ever met!!

SB - the actual "owner" of the bed is an elderly, very tolerant, Fox Terrier! He looked at the Shepherd, shook his head and went and got on his owners' bed!

Hilary - I missed out on the funniest part - he yaps and growls at the stick.... very reminiscent of Benny!

TA - I've never seen a dog who did the rolling and pawing like this one does! Very amusing! (and I actually cleaned up that expression - didn't want an X-rated blog!!)

Missicat - especially if it belongs to someone else!!

Doggie is a frustrated log-driver.
Cute video and dog logic states if you fit once, then you fit always.

I'd say you have yourself there a working dog! I like when the big one's still try to fit in small places : )

Good luck with the crafts. Try not to stress out too much

Is that a German Shephard in the doggie bed? Too cute. Those are some smart dogs!

Emily - it always amuses me when big dogs do that - it simply cannot be comfortable!!

head down and butt up
-
THIS IS A PHRASE? why has no ne ever told me? I LOVE THAT.

Miz, who is off to be headdownbuttup with work.

Miz - it's one of my personal favourites! :)

I keep trying to think of some useful purpose for this log moving ability....

The bed thing is not only dog-logic, it's cat-logic, too. I used to live up the street from a house with a little lollipop tree in a pot on the porch. They had an orange kitten. He would curl up around the stem of the little tree on the dirt in the pot. He grew. Faster than the tree did. He got fat. He still spent sunny afternoons curled around the tree in the pot, even when most of his body sagged over the edge. It was His Tree, after all.

Mary Anne - it is funny, isn't it, how they choose a spot that becomes their spot, no matter what!?