As many of you know by now, the Bag Lady does quite a lot of home canning. She loves to preserve as much of her garden produce as possible. She is always extremely careful about keeping her kitchen clean, and doing a proper job of canning. She follows all the directions and rules of home canning because she is very aware of the many ways things can go wrong.

She has her "Food Sanitation and Hygiene" certificate from the Alberta government, and follows all the rules and guidelines that she learned in that course. She sells some of her home canning at craft sales, and would be mortified if anyone ever got sick from something she had prepared.

She estimates she is now at the half-way point as far as her tomatoes are concerned. She actually cut down on the amount of canning that she usually does. She didn't plant any cucumbers or beets so she wouldn't be tempted to make any pickles. There are still quite a number of jars in her pantry from last year. But she will probably make at least one batch of pickled hot peppers, just because she has so many peppers!

Here is a photo of the canning she has done so far this summer (minus a few jars that she has already given away or that have already been consumed!): 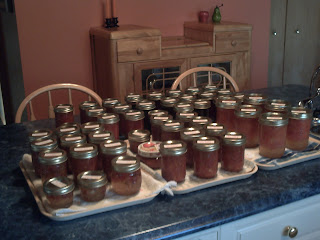 Very impressive! I didn't do any canning this year. And missed it.

I wish I had the time, equipment and knowledge to can. My father cans a little, but not me. If it can't be dehydrated, it doesn't get saved. Maybe someday, though.

We loved all the stuff you sent us, btw!

Do you have special names for your produce? I can just imagine a hot sauce called Bag Lady's Blaster :0)

as is the PINK FOR OCTOBER button (I was SO honored Reb came by Miz the other day!).

love,
a complete Luddite or she's be pink for Oct as well.

I love canning. Makes me feel in touch with my inner grandma.

I have never can before. My grandmother did all the time. Seeing your collection of canning, brings back wonderful memories.

I'd say that by now, you'd be qualified to do the Can-Can.

Pickled beets are my favorite!

Barrie - I would miss it, too! I was of two minds about planting just a few cucumbers to pickle, but finally decided against it. And now, with the bumper crop of tomatoes and peppers, I'm glad!
Thanks for taking the time to comment. Hope you'll be back.

BG - It isn't hard to learn to can, but you are right about it taking up your time. And I don't really do very much compared to some people!
I'm glad you liked what I sent!

TA - Your comment cracked me up! (That's twice this morning!!) And Bag Lady's Blaster might be a better name for my home-made beans, don't you think? :)

Miz - thanks! Had to honour my little sisters' battle! (and, as my blog was already pink, had to add a ribbon!)

Hil - not sure I can kick that high anymore!

SB - I did not plant beets this year because I still had 8 jars of pickled beets from last year, plus two large bags of frozen beets in the deep freeze. I love them, too, but had SO many beets last year, I was overwhelmed.

Someday I would love to grow enough tomatoes that I had some to can. My mom always canned tomatoes when we were growing up and they always tasted so much better than what you get at the grocery store.

Javachick - thanks! And yes, home-canned tomatoes always taste better. It's like summer in a jar.

New*me - actually I got the certification whilst working as a cook, but it applies everywhere.

If anyone ever wants tips on kitchen sanitation or safe food storage, just ask! :)

Excellent work, df Bag Lady. For as grandma-like as all this is, I say it's more "Little Red Hen."
I'm sure there's no shortage of people who'd help you eat it. Like me, for example...

My mom has shelves upon shelves of pickled hot peppers... I don't think she really thought that one out, seeing as how no one in my family really likes very hot foods. :)

dfBag Lady - Don't be silly. You know I am incapable of subtlety.

BUT: I made hot mixed pickles a couple years ago and was afraid that no-one would eat them. Opened them at Christmas and my sweet little mother-in-law ate almost the entire jar by herself! Had to open another jar. So one never knows.....

It all looks like so much fun! That's incredibly cool that you have the certification and all. I would love to do that. Me and my dad talked about canning our own tomatoes, but our tomato plant gave us such tiny ones that there wouldn't have been enough. We'll have to get a bigger plant and then get you to teach us all about canning for next year:)

PS Love TA's comment on naming all of your produce!

Sagan - you might need to get more than one plant if you want to have any to can! And I'd gladly teach you all I know.....

TA's comment cracked me up - I've been naming the cans all morning! (Starting with Terry's Tomatoes, and going downhill from there.....)

Wow, homemade soup from home canned tomatoes, what could be better?

I love that you put up a badge Sis. Thanks.

Wow...well done. Someone I work with is giving me some tomatoes, so I may try my had at sauce...I'm nervous. I've only ever made canned stuff once...well OK I *watched* my Mum do it...I'm such a lab geek I'd want to autoclave everything to sterilize it...

You should make up some labels on the computer. I made some for my Dad's wine and Mum's jam a while back...it's cute.

Wow! Quite impressive...my big feat of the year is OPENING a can of food. *sigh*

I love the badge. And am very impressed with the amount of cans.

How about a line of Baggie's Best canned delights?

Geo - my years of working in the dental office trained me well! I know what you mean about wanting to autoclave everything!
Canning isn't all that difficult - if you want any tips, email me.

And you're way ahead of me on the labels - I can't figure out how to do it with my word processing package. ~~sigh~~

Missicat - I was like that too when I was a single city girl....

Tricia - thanks! I'll be working on the next half soon! Tomatoes are almost ripe.....

Melissa, that's too funny!
(Both statements!)

Bag Lady's Blaster sounds like a winner to me!

I'm a homemade blackberry jam, gal, myself. Make buckets of wild blackberries into jam each year.

Blackberry jam sound fabulous. If I bring some salsa, we could have a partah! (it's spring there, now, right? I could start all over again.... after a wee breather, of course!)

Christine - thanks! I love it, too. My favourite is raspberry jelly, but the jam I made with the pluots this year is really, really good!