Three simple little words that signify the end of a generation in our family.

A large family of seven brothers and one sister. Considering the age span, they were quite close. The eldest, the girl, was married and raising a family of her own soon after the youngest (my father) was born. They homesteaded in what was then a remote area in the wilds of Alberta during the Dirty Thirties. Fortunately for them, their homestead, although remote, was not afflicted by the troubles experienced in other areas of the country at that time. They had little money, but they had plenty of wild game to hunt in the winter, wild berries to pick in the summer, and lots of hard work and fresh air to keep them healthy.

A musical family. All of them were taught to play a musical instrument, but the youngest boys formed an orchestra and played at dances in the small community where they grew up. They kept up the musical tradition as adults, playing together at the yearly family reunions they held. The three youngest siblings especially. If they knew they were going to see each other for any reason whatsoever, they always took along their musical instruments - violin, guitar, banjo. (I suppose it's fortunate none of them played the double bass....)

Their little orchestra was slowly diminished over the years as they passed away one by one until finally, Uncle Marvin was the last. He and I held many conversations, mostly over the phone because of physical distance, and he would reminisce about their early years. I heard some stories I had never heard before, along with some I knew by heart.

His youngest son contacted me a week or so ago to tell me the sad news. His father had slipped and fallen and broken a hip. At the age of 91 years and 8 months, he hadn't the strength to battle back.

My cousins did me the great honour of asking me to eulogize my uncle, and, although it was difficult, I hope I brought him back to life for a few minutes during the celebration of life they held for him.

Although we are saddened by his passing, I know that somewhere in the afterlife, there's another family reunion going on. In fact, I can faintly hear the strains of "Maple Sugar", "Wheels" and "Squaws Along the Yukon" right this minute. I can almost hear 'Doc' and 'Chief' ribbing 'the Kid' about being late to the party yet again. 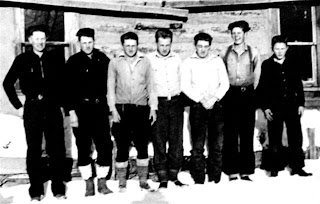 (Marvin is second from the right in this picture, my dad is on the right, and Gene, Leah's dad, is to the left of Marvin)

I too can hear the music sis. You did a great job of the eulogy and of this post. He will be missed by those of us left behind, but, I am sure the boys are happy to see him.

This is a lovely tribute to your uncle and his brothers (including your dad). So many stories to be told and much music to be remembered (and hopefully heard again, somehow) with fond memories attached.
My condolences to you & your extended family on the passing of your uncle.

Thanks, sis. I, too, am sure the brothers (and the rest of the clan) were happy to see him, too.

Karen - thank you. We are fortunate to have some recordings of some of those family reunions, both on audio tape and video, so we can hear them again!

Sorry to hear, though it's wonderful that you've done so much to keep the memories of this generation alive. And you have recordings? Priceless!

Glad at least you all got to see each other, just wish it had been a happier occasionn

T, Reb and Leah, I am so sorry for your loss. Your uncle sure has a bright smile in that photo. You wrote a beautiful tribute and I'll bet the eulogy was likewise. What a wonderful gift to have recordings of their music. Hugs to you.

So sorry for your loss and thank you for sharing some of your memories here.

I could "Maple Sugar" right after I heard about Marvin, and "Squaws Along the Yukon" is never far from my inner ear these days.

I expect their music has drawn quite a crowd.

I'm so sorry for your loss.
From your few words here I really got a feeling of your family interacting, and how great those reunions must have been (and perhaps are right now!). I think it's wonderful you have recording of them to pull out from time to time and remember the happy times.

I'm so sorry for your loss! He sounds like a wonderful man:)

Please accept my condolences for your loss.

No matter how long we have the people we love, it's never long enough.

To misquote John Donne, the loss of any musician diminishes me. Whether or not I have heard him.

My sympathies on your loss, and my thanks for sharing him with us.

Thanks, everyone, for your kind words. Uncle Marv was special, as were all the uncles in their own ways.
I read somewhere that we all die twice... the first time when our mortal body dies, and the second time when the last person who remembers us dies. I hope this little blog post will keep my dad's generation alive a wee bit longer.

Hello Cousin - your blog post is a lovely tribute to my Dad! What a great way to remember the Utas family. Thanks!