The Bag Lady had a busy weekend being adoptive mother to this little guy: 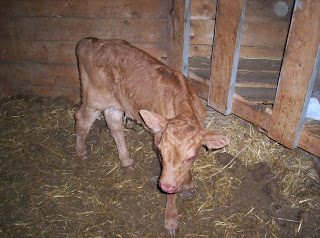 She had hoped that another cow would calve right away and be convinced that she had actually given birth to twins, but it didn't happen. At least he has a friend who likes to run and play with him, now that they have become acquainted: 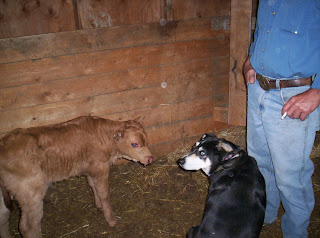 Hilary, of the Smitten Image blog, has suggested that the little guy be called Emel (M.L.... Maple Leaf, since he was born on Canada's birthday) which somehow suits him. Thanks, Hilary! (Of course, the Bag Lady will probably still call him Bobo most of the time - old habits die hard....)

The Bag Lady tried to auction him off to the cows the other night, but none of them could come up with the moo-la. (sorry. Sometimes it's hard to resist.)
Posted by the Bag Lady at 12:01 AM

Never resist humor, it gets me through.

A wonderful specimen of boviness, glad he is doing well.

Emel is adorable. Be interesting if he and Princess bond so much that Emel thinks he's a dog.
*moo-la* love it.

Emel Bobo is cute as hell and I love the pic with the dog.

Love Bobo Emel.. thanks for giving him that name. ;) And moola.. woohoo.. that's udderly hysterical!

Emel looks a mite confused there. It's all right if the Princess decides he's a dog, but if he grows up thinking he's a dog, it'll be troublesome when he weighs half a ton.

Emel is a great name and he is so cute!

I remember cows that just wouldn't care for their young. Max was one we had to bottle feed; he's the last one I remember.

Emel is a perfect name. Yay, Hilary!
If I could come up with the moo-la, I'd come up there and visit you and help with the bottle feeding. Alas, there is no moo-la to be had here (although there are plenty of cows within 10 minutes of my house).

So cute and very funny with the moola part.

I'm not sure what's up with Blogger, but it says there are 10 comments and is only showing me 5....

Thanks, everyone, for your comments.

Ahem! I believe I agreed with Hilary that Emel was the perfect name. Bobo would be a fine middle name. Although try saying Emel Bobo six times quickly - heh, heh!

Cheryl - I KNEW I saw a comment from you! Don't know what the heck Blogger did with it.....
sigh

Very cute! Emel will keep you very busy for a while it seems. Funny, what does Princess think of all this?

Conny - the Princess is totally enamoured of Emel - they play together! Emel chases the dog!!