Meanwhile, Back at the Ranch

Due to unforeseen circumstances, the Bag Lady and the Rancher had a change of plans for the weekend.
The Rancher went out to check on the cows yesterday morning. This has been a very long calving season, and he suspected there was a cow ready to have her calf. He was right. Sadly, the cow did not seem the least bit interested in being a mother. The Rancher found the calf out in the middle of the pasture, all alone. He loaded the calf into his truck and took him to his mother. She knocked the calf down and walked away!

The Rancher and the Bag Lady gave her a couple of chances, but her response was always the same, so they put the calf in the barn and fed him. 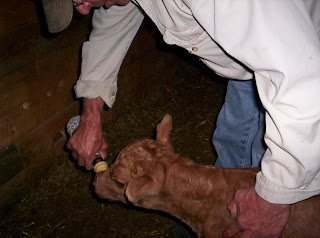 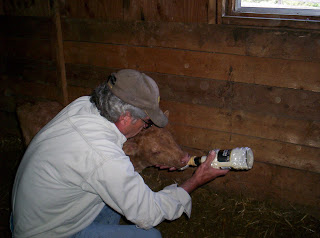 The Bag Lady and the Rancher will continue to feed the little calf until such time as he is ready to eat hay. Feeding him twice a day will put a bit of a crimp in camping trips, but the Bag Lady is willing to accept that as a small price to pay.
Posted by the Bag Lady at 12:01 AM

I wanna come and feed a calf with a bottle.

Does he get a special Canada Day name?

Good that he's got foster parents.

It is good that you knew in time. We just lost a baby for this very reason.

Aww, poor little blighter. Glad you found him in time.

Carla - I just got back from feeding him, and told him you wanted to be his surrogate momma. He wanted to know if you were bringing the Tornado to play with him 'cause he's lonely....

Mary Anne in Kentucky - well, we could name him after the first prime minister, but that's kinda boring. He'll probably just end up being called Bobo, which is what we usually call all the babies! (John A. McDonald Bobo)

Gail - I'm sorry to hear that you lost one - that always makes me sad. It was lucky that the Rancher went out when he did (of course, he would say it wasn't luck, it was skill and knowledge....)

dfLeah - I am, too. Poor little guy had found a surrogate mother in one of our oldes cows, but she hasn't had a calf, so doesn't have any milk. She certainly had him licked clean, though!

BG - thanks. I wish I could reunite him with his mother, but she still isn't showing much interest in him. I was hoping that her bag would get sore from not feeding a calf, and she would decide that he was hers, after all, but no such luck. Sigh.

You guys are saviors!
And such a cute little calf.
Congrats to you and the rancher.

Well, you can be thankful it isn't every four hours to feed him! Cute little guy.

I've never tried my hand at bottle raising anything bigger than kittens, squirrels, and puppies, so my hat is off to you.

Oh, the poor little thing. I wonder what makes a mother animal reject her baby? You are good foster parents. Too bad you couldn't just pack him up and take him with.

Awww Baggie. None of the other lactating cows show interest? The mothering who who licked him clean will at least be a good example of bovine acceptance for him though. It's sad that the mother's instinct didn't kick in.

I'm really glad you found him in time. :)

Aw! Poor baby! Good thing he has you guys take care of him!

I'm so sad for this little guy. I'm glad to know that a cow WANTS to be his mama, even if she can't feed him. I suppose it doesn't help him to know that he has a fan club of wanna-be calf mamas?