The Bag Lady and the Rancher went on a day trip with some very good friends of theirs the other day. Their friends are working to clean up some property to ready it for sale, so they were moving old equipment and salvaging mementos. Here is a picture of one of the pieces of equipment they moved. The Rancher was pleasantly surprised to see it, because it reminded him of the very first piece of equipment he learned to operate when he was a very young man. He was almost sure it was the same model he skidded trees with when he first went to work. (And no, he isn't all that old - the machine was old when he operated it!) 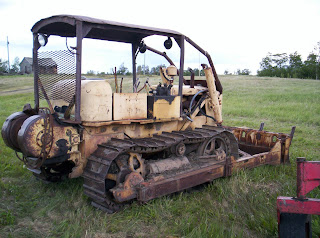 When the work was done, the four of them went on a tour to see more of the land that was in their friends' family. During the drive to the river bank, they woke this guy from his afternoon nap:

(click on any of the pictures to enlarge them) 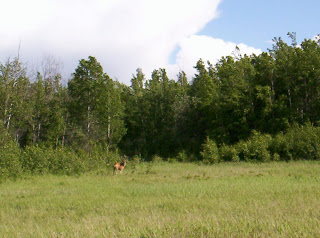 He had a huge rack of velvet-covered horns - so large, in fact, that when he was still lying down they at first thought he was an elk! Once he stood up, they realized he was a mule deer.

After a very short walk through the bush, they came out on this hogsback and were treated to this marvelous view: 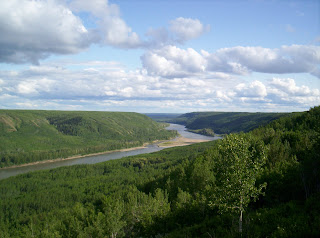 It's a little difficult to tell from this next picture, but the hogsback narrows to a point where the Rancher and his friend are standing. The Bag Lady has an unfortunate phobia of heights, and she simply could not force herself to walk all the way down to where they are standing. They kept trying to coax her down there in order to take a picture looking up the river, but she was afeared. 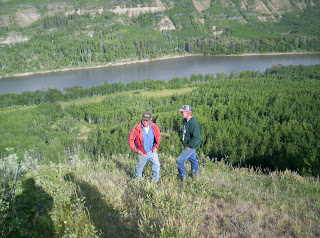 This was the best she could do as far as a picture in the other direction went: 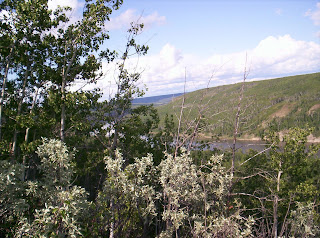 And, on the walk back to the vehicle, she saw this lovely wild tiger lily, growing sensibly far away from the scary steep riverbanks! 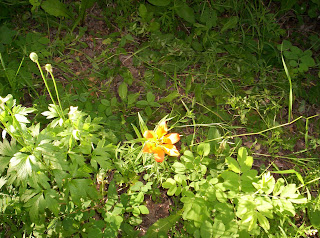 Have a great weekend, everyone, and Happy Fourth of July long weekend to our neighbours to the south!
Posted by the Bag Lady at 12:01 AM


I cleaned my bedroom and balcony windows today, except the one you stretch to reach... leaving that for the husband. You are a good influence. Around here, it's a case of the shoemakers children going barefoot. Rarely is my own house clean enough!

I am also "afeared" of heights. But just have to ask, what is a hogback, exactly? For a view like that, I just might venture out onto one.

(Brave talk since I was freaking out on rides at Calaway Park last weekend...and dreading the Stampede midway.

My now 7-yr old grandson expects Nana to continue to accompany him on rides. Too bad he's now tall enough for the bigger, scary ones.

LOVE the travels with BAGGIE (please to make a weekly theme?)!!

love that you also finally posted a wee pic of the rancher :)

Great photos, thanks for taking us along on the trip!

Love the pics, thanks. Totally with you on the heights thing.

Great shots of a lovely day, Baggie. I can't say I blame you on the heights things. I'd have been clinging to you saying "No, don't make us do it!"

Fun travels! You live in such a beautiful area.

Lil' Nana - glad to hear I am a good influence (that's not what I was called when I was younger....)
A hogsback is a piece of land that juts out with a ravine (or drop) on either side. The one we were on narrowed to a point, with a drop-off on both sides. It was probably perfectly safe.....

Miz - I would make it a weekly theme, if we went anywhere on a weekly basis.... sigh.

Crabby - glad you enjoyed it! And You probably would have hiked to the bottom and back up again, whereas I was too chicken to even go to the edge! :)

dfLeah - glad you liked them. Just wish I had been brave enough to go a little farther and get a better picture in the other direction!

Hilary - If there had been someone else there who was as afraid as I was, I'd have been clinging, believe me! As it was, our friends were quite understanding!

Sagan - thanks! There is beauty everywhere.

Great shots Sis. I know all about that heights thing too.

Thanks, sis! Yes, it seems to be a family trait.

"a little difficult to tell from this next picture"--no it's not! I took one look and went "Eek! Edge! Urk!" I hope you were using some zoom, there, because that was too close for me.

What a lovely view! I'm not so sure I'd go join them on the edge myself. Heights aren't so much the problem as edges...

Mary Anne in Kentucky - they kept saying that it wasn't really an edge - that the ground sloped down again quite gradually from where they were standing. From where I was standing, it looked like an edge!

Baggie--you have magnificent scenery. Your pictures always take my breath away.

Nice pictures of the wonderful scenery, and of course I mean the deer and the Rancher : )

They do say that fear of heights and loud noises are the two inherently encoded phobias, because they can represent true danger. When you don't want to go down the side of the hogsback, you're just being a nature girl.

Thanks, Clare! I feel much better about my phobia now. And my well-developed "startle reflex"! I'm just a primal nature girl! :)