The Rancher and the Bag Lady went for a little walk in the woods the other evening, and saw all kinds of interesting things. As the Bag Lady stumbled along, she spied these in the bushes:
(click on any of the pictures to enlarge) 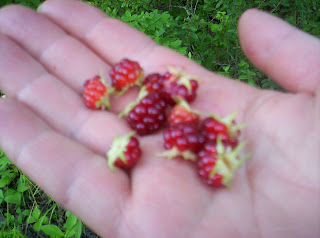 They are dewberries, and they are delicious! Similar to raspberries in appearance, but sweeter. These were ripe enough to eat, but when they are really ripe, they are more of a purple colour.

A little further down the trail, the Bag Lady's eye was caught by these pretty little flowers. She fumbled around, trying not to drop any of her dewberries, and managed to take this picture: 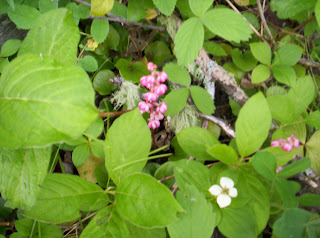 She has no idea what either of the flowers in this picture are (and is hoping her cousin's husband will be able to identify them!) The pink ones are what caught her eye - the white one just happened to be close enough to be included in the picture.

Later, on their drive home, she finally managed to get a picture of the geese at this dugout along the road. She has not had an opportunity to capture them before now, but she has been watching the babies grow! 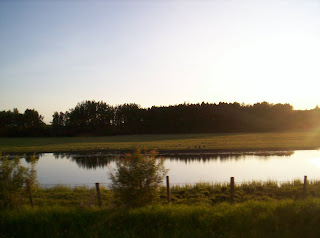 And, speaking of babies, she was a little surprised when she went out to check cows yesterday morning and discovered this little guy! 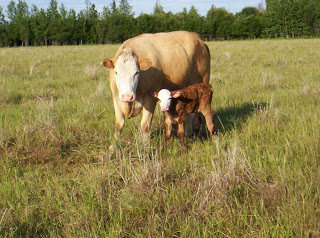 His mother was a little secretive about when she planned to introduce him to the world, but he was worth waiting for.

And lastly, here is a picture for Mizfit's Tornado, since she likes the pictures of the cows. Some of you may remember the calf from last year who liked to undo the gates. Turns out he also has a penchant for chewing on the Bag Lady's flannel shirt (that she wears in the evening to keep the mosquitoes from eating her alive when she's out in the pasture.) 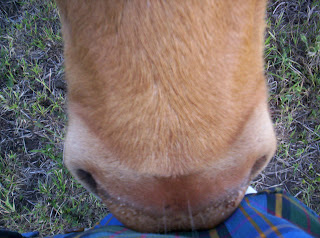 And that's what's been happening on the ranch lately!
Posted by the Bag Lady at 12:01 AM

Momma is really big! The flowers and berries are lovely.

OH MY GOSH.
she will love the cow's nose.


Miz, who is totally lolling about in child-FREE hogheaven :) while the husband plays with the Tornado UPSTAIRS.

Pink wintergreen. The white flower is a bunchberry.

Thanks for the virtual walk in the woods.

Aww... I think the Tornado needs a calf named after her..

Wow, what a wonderful surprise... dewberries, beauty in tiny pink flowers, and a new baby cow. You had a great day. Vee at www.veegettinghealthy.blogspot.com

Reb - that is Pegasus's momma!

Miz - ooh - a few minutes to loll about on your own!

dfLeah - thank you! I knew I could count on you.

Hilary - I think you're right - the new calf shall henceforth be called Breezy!

Vee - it was a great day indeed!

BG - I love the new calves, too! I love watching them bouncing around!

Marianne - I've never heard of thimbleberries (so, naturally, I Googled!) and it appears that they are related. And both are related to raspberries.
Dewberries grow closer to the ground, I think....

I wondered if that was Pegasus`s mom.

Ah, babies are the best.

Reb - and this calf is almost as big as Pegasus was!

Cutest noses ever! And those berries are so pretty.

I had some dewberries once, but they don't seem to grow around here much. I'm hoping to get down (and back up!) the hill soon to check on the blackberries.

That nose! Deer are interesting to watch (it's dusk right now and I can see some ears near the edge of the woods) and I like having some type of ungulate using my pasture, but deer don't let you scratch their foreheads, or snuffle you with whiskery nostrils. Wantz cow!

Ah, I can imagine getting a nuzzle from that muzzle.