The Bag Lady doesn't have a whole lot for you today. She spent most of yesterday hiding from the heat sewing and finally finished the gift she was working on for the Rancher's (now 2 month old!) grandchild.
She had a really hard time taking a decent picture of it. It looks weird in the photo. She hopes it won't look weird on the grandchild.....

She had a terrible time making up her mind about how to embellish the dress and finally asked the Rancher's opinion. The very first thing he said when he saw it was "Wow, that's cute!", which quite suprised her - he seldom pays attention to that kind of thing. The next surprise came when he picked the buttons and rickrack for the dress - his customary response is usually a shrug.

So here is the finished product: 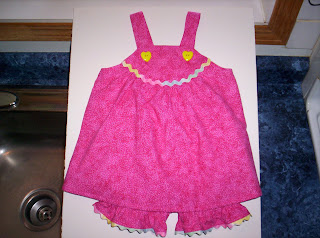 She has a few other sewing projects underway right now, too (which is part of the reason this one took her so long....) and will probably spend more of the upcoming week huddled over her sewing machine in the cool bedroom to escape the forecasted hot weather!
Posted by the Bag Lady at 12:01 AM

ok that is REALLY REALLY CUTE.

Ill take one in my size and a matching for the Tornado please.

(and some dill. always some dill)

It has a smile! Way cute, even without a grandchild inside.

Very cute. How 'bout that Rancher?

Adorable!! I'm a sucker for rickrack - I think because I grew up with it?? You have such talent:)

Wow, you made that? I'm so impressed, it's adorable!

How CUTE!!! Need to see pics of MizFit and Tornado in matching outfits! :-)

Miz - do you have a colour preference? Skulls, perhaps? :)

Mary Anne in Kentucky - I didn't even notice the smile 'til you pointed it out!

Charlotte - I like rickrack, too, especially on baby clothes.

Crabby - I picked the easiest one of several in the package.... :)

Missicat - thanks! I think we need to see that, too.... oh, wait, they did that for Mizfit's birthday!

So cute. And also cute that the Rancher had some input. :)

Aw that IS cute! Do we get to see a picture of it on said grandchild?

I'm going for "darling", just to be different. Way to go rancher!

Are you still sewing my straight jacket you promised me?

JavaChick - thanks! And the Rancher was very helpful.

Sagan - there is always a remote possibility of that....

POD - was that straight jacket or strait jacket - I've forgotten! :)