The Bag Lady spent most of her day yesterday outside, working in her yard. She finally got around to tackling the weeds and grass that had been invading her flowerbed. The Rancher pitched in, too, and did some digging for her.

He mowed the lawn, too. The Bag Lady went around the yard, picking up the dog's toys that were scattered all over the lawn so he would have clear mowing. When she got to the back of the house, she decided to move some big rocks in order to make it easier to mow.

She picked up a fairly large rock and it almost slipped out of her grasp. She managed to recover and not drop it, which was a good thing, because this little guy was hiding underneath it!
(click on any of the pictures to enlarge) 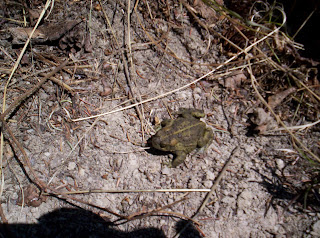 The Bag Lady picked him up and took him around to the front of the house where the Rancher was setting to the task of moving a very large water barrel that the Bag Lady decided would work better elsewhere.
She showed him to the Rancher, then took him back to the area where she found him, just in case he had a family close by!
The Rancher hollered at her a few minutes later to come back. He had succeeded in moving the barrel, and said "Look, here's his grand-daddy!" 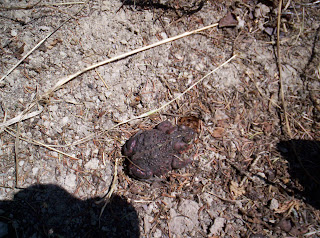 The first one was a dull greenish colour, but for some reason, this one is red! He is also quite a bit larger than the first, as you can see in this picture. 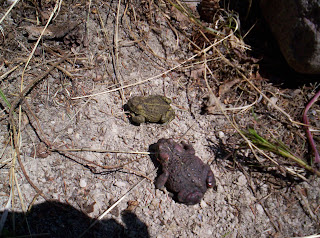 The Bag Lady picked him up and carried him to the back yard and set him free with the other guy. When the Rancher got around to mowing the back yard, he later told the Bag Lady that he had spied the big guy making his way across the yard! Must have been looking for a new toadstool to hide under!

Oh, and in case you ever wondered, toads' urine is cold. The Bag Lady knows this because BOTH of these toads peed on her hand! She was wearing gloves, but they have mesh in between the fingers, and she felt it immediately!

ahh, toad pee! I used to pick up these teeny frogs that would appear around my parents house after the rain waaaay back in the day! Good times!

oh the Toddler would have loved your day!! (pee included. who knew? and for some reason this writer now thinks THAT could be the crux of a mystery in a book. little known facts work so well that way. please commence writing. or git Leah to do it :))

BOTH? That must be a rarity; of all the dozens of toads I've held in my life, only one has ever peed on me.

I'm going to use that little Pfact on my science/nature-minded kids tonight. It would be nice to actually be able to teach them something, instead of the other way around!
Plus, I had not seen a red toad until today. Does that make it a red-letter day? ;)

A two toad day! I'm jealous. I haven't seen a toad in years. And a red one yet!
Lucky you. Even the pee part as it adds something else to the adventure.

(I looked them up in my herpetology dichotomous key, in case you're wondering!)

Rupal - rain frogs? We see toads fairly often around here - we both stop and move them out of the way when we're mowing the lawn!

Miz - I immediately thought of the Toddler and how she would have enjoyed seeing the toads! :)

Mary Ann in Kentucky - I have picked up countless toads and have never once had one pee on me! It was a red-letter day! :)
Hubby told me to stop squeezing them!

kcinnova - it makes total sense when you think about it - amphibians are cold-blooded - but for some reason, it surprised me. Well, that, plus the fact that I've never had one pee on me before.....

dfLeah - I've never seen two such large ones. Ordinarily the toads I see are quite tiny. The first guy looked pretty big to me, until I saw Gramps!!

Christine - Thanks! I looked them up on the internet, but couldn't decide for sure. I was leaning toward Boreal toads, mostly because of the distribution map. And apparently all of them go through a 'red' phase. I was confused by how green the other guy was, too. The others I've seen have been more textbook - not so colourful!

In my herpetology class, if there's anything I learned is that none of the frogs/toads/lizards/snakes/salamanders ever looked like what they were supposed to :P

You have the gift. My friend Lowell has the same gift, only with garter snakes.
Ah, amphibian pee...good times.

That one toad is HUGE...

I love frogs. They just seem to have so much personality. (But I still don't think I'd be too quick to pick one up!)

Christine - well, that's true of these two - they didn't look like any of the pictures I saw!

Geo - thank heavens I don't have the gift with snakes! I really, really don't like snakes....

Scrumpy - I probably wouldn't have picked either of them up without gloves on! I'm funny that way.

We had a visit from a frog last year (or toad). He spent the year in the garden, mostly the corn patch, and loved waterin' time! Haven't seen him yet this year. We have foxes, cats and dogs running rampant around - hope he's ok!

Vee - we almost always have a toad or two around the yard. The dog just barks at them when she sees them!

Ok - Ewww. I love lizzards, but for some reasons, frogs/toads - just freak me out! I wouldn't have picked it up. I would have hopped away just as fast as a frog! Hehe

I hope you don't get warts LOL! Oh wait, you were wearing gloves...and that is only an old wives tale... well darn, can you tell I'm out of witty commentary?!?

Emily - I tried to think of a way to work that old wive's tale into the story too.... guess we're both out of wit!

Interesting that their pee is cold! Never really thought about that before... hehe. So nice that you've got a whole family of them.

Wow, what a day for you. I never thought I would hear of you picking up toads... oh, wait, no - I'm thinking of me. That red one is lovely.

Peeing frogs! oh my! Wonder what the cats reactions would have been....

I've never been peed on by a toad. I'm so glad I come here. How else would I know that it's cold?

Did you have that "pee" analyzed by a lab? How do you know it's pee? Are you a toad doctor? Maybe you brought those toads to orgasm because of your fabulousness. Just one touch from you and *BOOM* -- those toads let loose.

Ewwww! You're brave! I couldn't pick one up, I don't think. Glad you saved their lives. We don't see them very often

My kids loved the froggy pics! They would be in 7th heaven at your place! Plus they don't mind a little frog pee on their hands;)

Aleta - oops - how did I miss your comment? I feel that way about most things - spiders, snakes, bugs, but for some reason, toads don't bother me. Perhaps it's because they eat most of the above-named...!

Sagan - I had never given it any thought before, either, but it does make sense.

Reb - there was a time when I wouldn't have picked them up, either. Still wouldn't probably, if I hadn't had gloves on.

Missicat - I didn't want to risk finding out what my cats' reactions would be - I made sure I put the toads somewhere away from the cats (and the dog, too, for that matter)

BG - always an education here, eh? Hahahahahaha As soon as the first one peed on me, I knew exactly what my blog post would be today!

POD - of course, that could have been it - after all, it's mating season for toads..... Hey, wait a minute! Are you saying I'd be attractive to toads? Sheesh. *mutter, mutter* just wait until the Rancher hears that she called him a toad.... *mutter*

Redbush - I probably wouldn't have picked either of them up if I hadn't been wearing gloves!

Charlotte - glad your kids enjoyed the pictures! If you bring them here, they can hold all the toads they can find, and let them pee on their hands! :)

You're one of the lucky ones. Much better to experience frog pee than toadstool. ;)