The Bag Lady had an enjoyable weekend. She spent most of Friday in town with a friend. The Bag Lady, if you recall, had a flat tire a couple weeks ago, but the tire shop that she deals with didn't have the right one to replace it, so they had to order it. (In the meantime, they gave her a different tire to use so she would still have a spare in case of another flat.)

She finally got her truck in to have the new tire put on, and met a friend for lunch while she waited. The (very busy) shop still hadn't finished with her truck when they were finished lunch, so she and her friend ran some errands and did some shopping. They giggled their way around town and the Bag Lady bought a few things that she probably wouldn't have otherwise, but were absolutely essential; honest! Like a super-duper new electric skillet that comes apart and can be washed in the dishwasher - woohoo! And some new pens and stationery supplies - the Bag Lady has an addiction to all things related to writing, so she cannot pass up an opportunity to purchase pens, or pencils, etc., and her friend is a retired school-teacher with much the same addiction!

On Saturday, more friends came to visit, and one of them repaired the fascia on the edge of her roof that had been blown off in a storm a few years ago. The Bag Lady and the Rancher are both afraid of heights, and the Rancher (the braver of the two) hadn't gotten around to fixing the fascia. Much beer was consumed (after the repairs were finished) and many of the world's problems were solved amidst much laughter. Even some karaoke was sung!

On Sunday, the Rancher and his brother did some repair work at their mother's house. Then the Rancher's daughter and her family came for a visit. Much laughter also ensued.

The Bag Lady processed a gazillion tomatoes yesterday, and will turn them into something interesting today. She will probably use them to make more salsa (this batch will be hotter), and will also straight can some of them for use in a variety of recipes over the winter. Spaghetti sauce is always delicious with home-grown tomatoes!

Remember when she started her tomatoes way back in the spring, and had just planted them outside when they froze and she lost most of them? One of the varieties that she planted was called Pink Ponderosa. And at least one of the plants that survived that frost in July was a Pink Ponderosa. Here is a photo of two different coloured tomatoes. Although it is a little difficult to tell from the picture, the tomato on the left has a decidedly pink cast in comparison to the tomato on the right (which, if memory serves her correctly, is a Sub-Arctic): 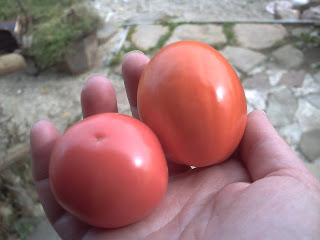 Her peppers are also ripening rapidly, and she will deal with them, too. Well, except for the Habaneros, because she is still afraid of them! One of her visitors on Saturday ate one of the Habaneros and pronounced it a little hot. Judging from the tears running down his face and the steam coming from his ears, the Bag Lady thought he was probably right!

How was your weekend?
Posted by the Bag Lady at 4:23 AM

did I miss the part where there was beer being drunk?
*runs back to reread*
and I need more friends.
different friends.
friends who will repair my roof (!).

why do I think that happens to you because of WHO YOU and the RANCHER (forever the cow whisperer in my mind. shhhh) are?


I had a great weekend as well (wink)

Oooh the pink tomatoes are so nice. Slice them really thick, slap some mayonaise onto a good thick sliced seedy bread, slice some good mature cheddar on there.... eat over the kitchen sink so you don't destroy your shirt.

Or, just eat the tomato like an apple. I used to do that all the time with the pink ones.

My weekend was pretty good, Saturday was spent in pain from Friday's gym visit but Sunday was productive what with a "Memory Walk", grocery shopping and turkey curry.

I'd be scared of the habaneros too... maybe dry them and sell them at a craft fair? At least they wouldn't go to waste in that case.

Miz - Plenty of beer was flowing whilst the guys solved the world's problems!
And I'm glad to hear you had a good time, too!!!! Hehehehehehe

Christine - oh, yes, the tomato sandwich over the sink - nothing like it!!
And I have a recipe for Habanero Gold hot pepper jelly that I might make, but I like your idea about drying them and selling them at a craft fair. I have a table booked for a craft sale in November (to sell my bags), so I will remember your suggestion!

Am jealous of your tomato wizardry!

We tried 'em for the first time this summer--not enough sun, durn it.

And the fact that you can turn the tomatoes into something-even better!

Crabby - we had plenty of sun this summer, even though the late (and early!) frosts shortened our growing season!

There's always next year, so don't give up on the tomatoes!!

Sounds like you had a busy, fun time. The tomaotes sound so good. I have carrots to deal with today.
I totally get being scared of the Habaneros. They deserve our respect.

dfLeah - I'm leaving my carrots in the ground until I've finished dealing with the tomatoes. At least, that's the plan....

I love stationary so much!!! I can live without the implements to write with mostly, because I (shh) steal them from work, but beautiful notebooks... all those blank, expectant pages....and writing paper and matching envelopes... and pretty organisers and journals and...ahhh...

I had a good weekend thankyou! My lodger moved in. He likes to eat a lot and work out a lot, so I think we will get on well :)

TA - I added a link to a picture of my new electric skillet, which is an electric frying pan.

Glad to hear your lodger is someone you will be able to get along with!

Such a nice socializing weekend! I share your addiction to nice stationary and pens (I was going crazy in Italy over all their fancy paper and notebooks... so so pretty!).

And I guess its not so bad if it was taking a long time at the shop- lunch and shopping are always enjoyable ways to pass the time!

Also that tomato is surprisingly pink. It makes me think of a berry for some reason.

I'm glad to hear that you had such a busy and fun weekend...it sounds relaxing even though there was so much going on.

Nothing much to report here..hubby worked and I tried not to spend too much money on stuff we don't need : )

Sagan - it was a good socializing weekend. Hubby even actually had one day off!
It sounds as though I'm not alone in my stationary addiction. Perhaps there's a 12-step program?

Emily - glad to hear you were at least trying not to spend too much money!

Lady, do you ever take a break?

Aren't electric skillets the handiest little gadgets? My mom always uses hers. I think I need to put that on my Christmas list. :)

SB - I love my electric skillet. I have one that's almost 30 years old, but still works fine. I'm anxious to give this new one a try!!

As I read this, I thought about the garden I want, and will get, even if I have to wait a few more years.

I also thought about the more morbid of my grandmother's tricks in the garden: dump animal blood on the soil to up the amount of iron (when she was a nurse, the hospital she worked at would let her take expired blood for that purpose).

My weekend was okay, a lot of working out, but BK was visiting friends all weekend, and I had problems sleeping (although I did sleep on the couch and pretend I was mad at him).

Pink tomatoes and an upcoming craft sale. I'm thinking a new line of salsa, spaghetti sauce and ketchup for Barbie...

Tricia - that would be the same principal as adding blood meal (which you used to be able buy as a powdered additive). I just use lots of manure, because we have lots of manure!!

Hilary - I just can't find Barbie-size canning jars, or you know I'd be right on that!!

You should try smoking your peppers...I picked up a smoked jalapeno at the farmer's market over the weekend...made breakfast with it. Whew! It packed some heat...tasted very good tho.

My Mum got that skillet last year but was annoyed she couldn't make schnitzel in it...apparently it's designed to drain to the edge of the pan so the butter you fry the shnitzel in doesn't stay covering the bottom of the pan. I ended up with it tho, so I can't complain...works great.

Do the pink tomatoes taste different? I'm curious...
Oh and I still haven't emailed you. I'm sorry. I will do so tonight after my shift at the pledge mine. I'm glad you had a good weekend.

Beer + karaoke = always fun! Did you happen to have your video recorder out? hehe

Geo - I will perhaps try smoking a pepper or two, but, actually, I prefer regular cigarettes.... oh, wait, that's not what you meant? hehehehe
I have a recipe for pickled roasted red peppers. I wonder if it would work with those little super chilies... hmmm, experimentation coming!

Missicat - no, thank the Great One, no-one video-taped our drunken karaoke-ing! Some things are better as memories!!

It sounds like you had a lovely weekend. Mine was almost normal except for lack of internet. I bought a new sewing box, though, and did a lot of cooking. Now that my neighbors all have lights again and we even have a few streetlights, it's not so scary to check the news and my email at night, so that helps too.

Nice tomatoes-- my dad sometimes sends me some that he grows. Now that we're minus some tree limbs around my yard, maybe I'll try to grow my own tomatoes next year. Gotta make those hurricanes useful for something!

Wow, that skillet looks fancy Sis! I don't blame you for being afraid of the habaneros, maybe fire up your outdoor oven to roast them? In between a few loaves of bread of course. Sounds like you had a wonderful weekend.

BG - It would be great if you can turn the hurricane into something positive! Glad things are almost normal again!

Reb - Yup, those habaneros scare me! Good idea about using the outdoor oven, but I've already put it to bed for the winter!

What a fun way to get a tire fixed. Shopping with a buddy! And I've already had lunch, but now I'm craving a tomato sandwich.

Amy - I can't think of a better way to get a tire fixed, to be honest! And tomato sandwiches are pretty wonderful this time of year, arent they?

I wanna come visit you sometime!!! You have so much fun!