Confessions of a Lunatic

The Bag Lady has had some very strange thoughts lately. Oh, stop it! Not that kind of thoughts, sheesh!

She has been walking for exercise, and trying to increase the cardiovascular benefit by doing such things as swinging her arms, or kicking her legs out in front of her (rather like she's marching with the Russian army - it is the Russians, isn't it, who do that?)

She lives at the end of a dead-end road, so there's never anyone around to see her doing these things. But (and here's where the strange thoughts come in) she wonders occasionally about all those satellites that are trained on every inch of the earth. Do you think there's anyone around, monitoring those things, and laughing their asses off at that crazy old woman marching along on the gravel road down there?

Does anyone else remember "Candid Camera"? It was a television program where they would set up some crazy scene and lure unsuspecting passersby into doing ridiculously funny things without realizing they were being filmed. The program was on when the Bag Lady was very young and impressionable, and it set her up for life as slightly paranoid! That, and the idea that God was always watching was enough to keep the Bag Lady on the straight and narrow forever. Itchy butt? Don't scratch because someone might have a camera hidden in that spruce tree! And even if there's no camera, God can see you. Don't pick your nose, or fix your wedgie - even when you are totally alone, because there might be a camera. And God never sleeps.

So the Bag Lady wonders, if it's cloudy, and dark, and she goes out walking, swinging her arms and kicking her legs out, the satellites can't see her, right? 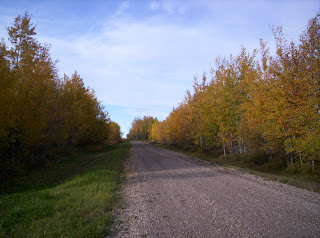 I ALWAYS worry about that! But then I think "well, so what if they are laughing at me?" and then I just sing louder/pick my nose more dramatically/unpick my wedgie with a flourish.

Things are only embarrassing when you're trying to pretend you're not actually doing them, or that you might care about what anybody thinks.

Come on Bag Lady, you're used to being on a stage!

Oh I worry about being watched, too, but then I think that whoever is stuck watching has long since been bored to an early grave so I don't care.
As for goose-stepping, that's my normal walk. I was 10 years old before I realized folk bend their knees when they walk.

TA - you crack me up! I'm still chuckling at the thought of you "un-picking your wedgie with a flourish"!

And I'm afraid most of the time, my life is completely boring, too, Leah!

They're coming to take you away, ha, ha, hee, hee!

As long as you don't have your shotgun slung over your shoulder the satellite ppl won't care, ham it up for them! There is supposed to be a website somewhere that will tell you when the satellites are over you. Well, unless you've been doing things that warrant them re-directing them.

Reb - aha! I never thought of carrying a gun!! That would be just a wee bit TOO much, though. God might not approve! :)

and what we would NOT do to see you doing it.

and you KNOW that means we're old dont you?

Im a candid camera.
the kids I work with when i do school visits? PUNKEDD. theyve no clue about the camera :)

You should move to the city, BL! The odds are so good that you're being watched by humans or cameras that for the sake of your sanity you eventually have to give up caring one way or the other.

There is some truth to what you say! I looked up our old house on Google Earth and it was wierd to see Rion's car parked outside in the drive way. Call me paranoid, but I totally understand where you're coming from and it does creep me out.

PS. We all totally saw you pick that weedgie!!

We must get you some "walking sticks"next week and then you will look perfectly normal 'striding' out like you are in "the army"
but, yes, if you "google earth" you will be able to zoom in on that gravel dead end road - and your cute little pick-up in your driveway!!! but chances of the sat' passing over once every 24 hours and catching you 'picking unmentionables,wedgies etc' pretty remote, I would say.. BUT, what a RIDE IF YOU WERE ON THE ROAD ON THE DAY THEY CAUGHT YOU!!WOOHOO
See ya soon..
cowboy's cuz

Candid Camera scarred me for life in much the same way.

Not as badly as "Then Again, Maybe I Won't" by Judy Blume, in which the main character, a teenage boy, spies on his teenage girl neighbour every night when she undresses, because their windows look into one anothers'. I got dressed and undressed in a dark closet for YEARS after reading that book.

I would walk when it's light out and BE PROUD! Around here, if you walk in the dark.......watch out for skunks!

I'm having a hard time trying to imagine what you're talking about. I'll need to see a video... ;)

Miz - that's why I felt I had to explain it - I wasn't sure some of the younger ones would know what Candid Camera was!

BG - oh, I'm not sure I could stand the idea of being watched all the time. And if I lived in the city, there would be all that noise, and all those people! I would probably go insane, anyway....

Emily - I'm glad someone else feels the same way! And I did NOT pick that wedgie....honest!!

Cowboy's Cuz - I actually did Google Earth our place (again) recently, and discovered they've changed the picture - you can count the trees along our driveway! It's too strange! (it's actually an old photo, though - no cute little truck in the driveway!)

Christine - it's nice to know someone else who was affected that way... sad, but comforting!

New*me - no skunks around here, but I still probably wouldn't walk in the dark - we have bears, wolves, coyotes, cougars, and other scary creatures!

Hilary - you crack me up! There will be no goose-stepping videos of the Bag Lady!

I sometimes have the same thoughts. I do yoga in the living area of the apartment, and I sometimes wonder if anyone can see in the sliding glass door.

We live on the top floor, and there's nothing around that would allow someone to see into it.

I sometimes wonder the same thing! Oh Candid Camera... such a big part of my childhood:P

I love that you walk like that. I totally do that too. But down the main streets of my city. So everyone sees me and thinks, "who's that crazy girl and what on earth is she doing?"

I figure that people get too stressed out in their day to day lives, they might as well have some kind of entertainment on their way to work! And what better entertainment than random crazy people walking in an amusing fashion? :)

Tricia - I guess everyone does it once in awhile, eh? Even when you know no-one can see into your apartment!!

Sagan - the idea of you goose-stepping down the city streets just cracks me up!! Good for you!

I wish I didn't give a crap what anyone else thought, but I struggle with the dork-walking issue too.

I went back to running since it seems I would rather trash my knees than swivel my hips enough to do race-walking.

Oh, Crabby - but, what the hell! If it's something you really love doing, I guess you'll do it. Until you can't. I hear they are doing amazing things with knee replacements nowadays......

We watched it religiously when I was little. And he had really pretty twinkly brown eyes.

Yes! That was his name - good for you for remembering!
We watched it all the time, too.