A couple of days ago, the Bag Lady stopped for a minute down by the river and took a photo through a gap in the trees. This is not a place she ordinarily frequents, especially at night, because it is a party spot for the teenagers from town. Quite a few very bad things have happened there, but this day there was no-one around and she wanted to take some pictures. 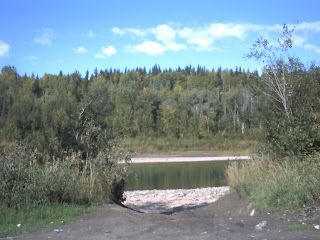 She also took a picture of the other side of the highway, looking up the hill. The trees had started to turn and she thought it looked rather pretty. 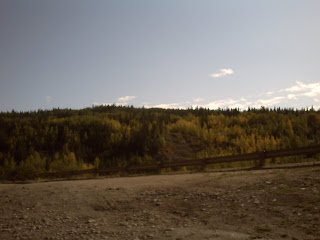 Yesterday, she happened to be in almost the same place, and the trees have turned a little more, so she took a comparison shot: 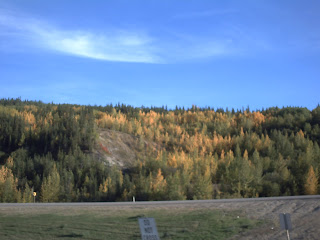 Yesterday was a very nice day, and the heat ushered in a thunderstorm last night! Thunderstorms in September are rather rare in this area, so the Bag Lady was a little surprised. She thought about trying to capture it on film, but it was very dark, and she thought it would be a little boring to watch. There were some spectacular flashes of lightning, though, and a few fairly loud cracks of thunder.
The poor Princess unsuspectingly went outside in the dark, and almost tore the door down in her efforts to get back in when she realized there was a thunderstorm! She is not a fan of loud noises. To be perfectly honest, neither is the Bag Lady! She loves watching the lightning, but is afraid of thunder. Even though she is perfectly aware that it is the lightning that is dangerous and that the thunder won't hurt her. She doesn't have to be rational ALL the time, does she?

Oh, and speaking of crazy, here is a picture of the spinach in her garden. There have been several hard frosts since the beginning of September, but her spinach is very hardy, apparently! She went out to check on it yesterday and was amazed to find it still looking very good! 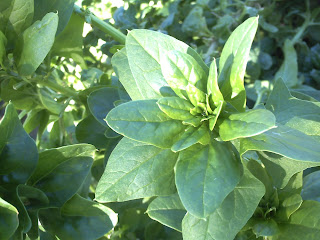 So she is still dehydrating spinach. She made a loaf of (Bunnygirl's) spinach cheese bread for her sister and her friends when they visited, and they loved it!
Posted by the Bag Lady at 12:01 AM

Wow - spinach cheese bread sounds great! I would love to spend the day with Bag Lady in the kitchen, I would learn so much!

Gorgeous pictures, I love all the Autumn oranges and reds. And crunchy leaves under your feet.

I miss Thunderstorms. They were so dramatic in Manitoba. We still got them in Ontario and Montreal of course, but nothing like the Prairies.

And Ireland barely gets any at all.

I've started replacing the salad on John's sandwiches for work with Spinach - he hasn't complained and it's better for him :P

Im a grown ass woman and STILL kind of afraid of storms.
you should see me PRETENDING I! love! them! when it storms around here so that my Toddler doesnt pick up on my fear.

*I* would love to be as hearty as that spinach.

Great photos Bag Lady! Your spinach looks great, I may have to try planting some next year. :)

TA - spinach cheese bread IS awesome! And we would have a blast in the kitchen together, I'm sure! (so when are you coming over? I really should do a wee bit of cleaning first, so give me some warning, 'kay?) :)

I love the colours of Autumn, but find it depressing, because I know what's coming!

Christine - no thunderstorms in Ireland?! Sheesh. They certainly are dramatic around here at times - last night's was fairly tame.

Miz - I admit I'm kind of a coward about the storms. I have a real love/hate relationship with them!

And that spinach is truly amazing...

Javachick - we were posting at the same time - sorry!
I planted two different types of spinach this year - Canadian Green (Correnta) and Long Standing Bloomsdale - and both of them seem to still be hanging in there! Who'd'a'thunk?

Nice work on the autumn pics.
How 'bout that spinach?!
I quite enjoy a good thunderstorm, especially when it sounds like it's banging right above me.

I was just starting to get less frightened of thunderstorms this summer, then the house next door got hit by lightening and caught on fire.

Have gone back to being scared again!

dfLeah - that spinach is almost annoying! I keep thinking the frost will kill it, but so far, NOT! So I feel obligated to pick more and dehydrate it so it doesn't go to waste....sigh.

Crabby - OMG! That would scare the crap outta me! (something new to worry about....)
And the spinach cheese bread is terrific....I'll send you the recipe (along with the other stuff I promised! Ummm, when are you moving back west?)

Spinach cheese bread? yum! I love autumn, cannot wait for the leaves to change around here. Bad Cat is terrified of thunder, will be interesting to see how Bad Kitten reacts.

Missicat - Bad Kitten will probably pick up on Bad Cat's fear of thunderstorms. But then again, maybe not....
When the Princess was younger, I tried not to let my fear show, but she is still terrified. But lots of dogs are, so that's one small thing I don't actually blame myself for!

And rationality is far overrated:)

Oh, that Spinach bread was wonderful Sis! Good photos amazing the change one day can make. I love thunderstorms and the silly cat I have that is afraid of every other loud noise in the world, doesn't even twitch an ear at thunder.

And thunder is actually a by-product of lightning (it has to do with how quickly the air temperature changes due to heat from the lightning), so you're technically afraid of lightning.

I think that fear of the loudness has to do with the fight or flight response mechanism and the surprise loudness.

Mmmm...spinach cheese bread sounds very nosh to me.
I love thunderstorms. I usually sit at the window and watch them over the river...while the cats hide under my blankets and try to get to my hot chocolate.

omg....I could SOOOO make a dent in that bread! Mmmmmmmm!!!!

Sagan - the spinach cheese bread is delicious! And simple (in the breadmaker, of course!)

Thanks, Reb - my cats don't seem the least bit bothered by thunder, but the poor Princess.....

Tricia - that's probably why I am afraid of thunder - it's the fight or flight reflex!

Geo - spinach cheese bread is yummy! And good for you.
I love watching the lightning, but, even though I'm expecting it, the thunder still makes me jump - I must have an overdeveloped 'startle' reflex! :)

Gorgeous pictures! All the pictures I take look like they're action photos--standing still. I've got waaaaaay behind in my blog reading this summer and I'm trying to catch up. No telling what sort of adventures you've been having without me!

Amy - the adventures never stop!! :)
It's been a busy summer around here, too!

My parents told me that one of my first words was spoken during a thunderstorm--every time the lightning flashed I would clap my hands and shout "Flashlight!"
My dogs have varied in their response. Biscuit and Pete were undisturbed by them. Hobie was terrified. (When I got him he was five, and it was a month after Hurricane Fran hit Raleigh NC, but he remained terrified of them for the next ten years.) When I first got Stony, he shared Hobie's fear, but (he had been a stray for probably a couple of months) as he got used to being indoors, out of the wet wind, he stopped being bothered by them.

Hi, Mary Anne! Glad to see you back. So, do you still clap your hands and say "flashlight"? That's too cute.

All my dogs have been afraid of thunder, but most especially Thor, who, ironically, was named for the Norse God of thunder. The other dog we had at that time didn't seem bothered by it at first, but quickly clued in that Thor was afraid. She was a mid-sized dog, and always wanted to climb into my lap when it stormed.