Not Quite a Peck

Remember the hard frost the Bag Lady told you about earlier this week? And how she said she had covered her pepper plants and thought they would be okay? Well, she was wrong. When she checked them later on that afternoon, the leaves were all wilted and sad-looking. So she picked a peck of peppers! Seriously, does anyone know how many peppers are in a peck? (8 quarts, for those of us who really need to know....so, okay, she doesn't have a peck of peppers. But definitely part of a peck.)

Here is a photo of her harvest: 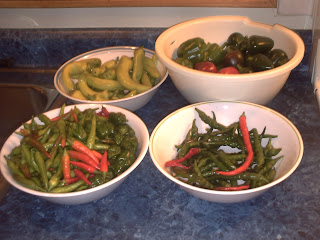 Of course, this photo was taken after she used some of them to make hot sauce. She has never made hot sauce before, but decided against using the entire amount of peppers required in the recipe. And she thinks the hot sauce tastes exactly right. A nice amount of heat, but doesn't take the roof of your mouth off! Those little Super Chilies pack a punch. She doesn't know if you can tell from the photo, but there are also a few Habaneros in the bowl with the Super Chilies. She isn't sure what she will do with them.

Here's a photo of the hot sauce: 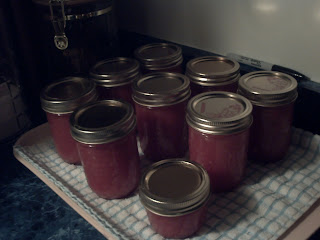 She still has quite a load of tomatoes (at least a peck, maybe even a kenning!) yet to ripen, and will wait for some of the peppers to ripen before she does anything else with them. Perhaps pickled peppers are in order! Maybe some more hot pepper jelly. Definitely more salsa!

Ummmm, gee, there isn't much else.

Have a good weekend Bag Lady! What do you have lined up?

Wow, I had no idea that a peck was a real amount. Peter Piper had his work cut out for him and no mistake.

I think a sure fire way to get John interested in helping me to garden would be to grow hot peppers - he LOVES spicy food.

I am, as ever, jealous of your garden :)

I'm thinking that with all those hot peppers, if there any way you could learn hot to effectively extract and store the Capsaicin, which I'm coming to realize is a very effective pain killer.

Mizfit stop singing, unless you want me droning along with you! ;)

I sing that to my kiddos all the time!! Ahhhh.......vision of pecks of peppers dancing in head to the tune of MF's singing :)

TA - a peck was originally a Scottish measure, so how would an English girl like yourself be expected to know!? :)
No big plans for the weekend - how about you?

Christine - You'll have to have a garden next year for sure (and if not an actual garden, at least grow some peppers and tomatoes in pots!) Hope your weekend is great, too!

Hilary - but if you use a cream containing Capsaicin, be careful not to get it on your hands - it stays with you and makes dealing with your contact lenses a very painful event!
I'm loving the singing around here!

New*me - it's starting to sound like a real concert now!

Mary Anne - oops - we posted at the same time!
You still haven't had any rain?! Ours came too late to save the crops, and is now just screwing up the farmers who are trying to take what little crop they DID have off the fields!
And it's damned cold, too.

I don't even like peppers all that much but you make them look so appealing!

So I just wanted to stop by and say howdy and warn you that I'm pulling back from blog commenting for a bit.

This is one of my absolute most favorite hangouts so I will certainly be here, reading along and enjoying ever post and video; I just have decided to stop running around the internet commenting quite so much until I make at least a little bit of progress on my long term goals.

Will miss chatting and hope its a very short term thing! And thanks Bag Lady, and all the regulars here for all the encouragement over at Cranky Fitness. I'm gonna try to keep it together 'cause I'd really hate to lose this!

Gena - thanks, hope your weekend is great, too!

Crabby - I can certainly understand how you feel, and I know that it is very time-consuming to visit all the great blogs and stop to comment.
Of course, that doesn't mean I won't miss your witty, clever, insightful, intelligent and kind comments!
I hope this is just a temporary thing, and once you've taken a bit of a breather, you'll be back amongst us, adding your insights to the comments!
And if you have time, even just a little hello once in awhile will be enough!

dfBag Lady, I'm going to have to look up kenning. I love it when someone sends me to the dictionary. Thanks.
The hot sauce looks tasty.

I am a hot sauce addict - I put it on EVERYTHING!

Sarah - I love it too, but especially on eggs and chicken.
This home-made stuff is actually pretty good!

So if there's 8 quarts to a peck, how many pecks to a kenning?

So sad about your peppers! But am glad the hot sauce turned out well. What do you plan on using that many jars of hot sauce for?

Now that song is going through my head..thanks MizFit! hehe
Supposed to rain all weekend here. wah.

Sagan - 2 pecks to a kenning (which is now considered obsolete), 4 pecks to a bushel.
And some of the hot sauce will probably be given away as gifts, but I'm pretty sure I'll be eating quite a bit of it myself! :)

Missicat - it's rainy and cool here, too, but supposed to warm up nicely by Monday.

Ooh didn't know that about a bushel, either!

But I meant more along the lines of what kind of recipes do you use the hot sauce for? Or is it one of those things that can be added in splashes to just about any meal?

Oh, sorry, didn't read you right! I use it on scrambled eggs, or chicken (it's great for hot chicken wings!), add it to tacos, or any other Mexican-style dish.....lots of things!

Pickled peppers are delish.
I've been putting pickled banana peppers and pepperoncini on everything lately. Yum. I tend to buy them sliced after giving myself stitches last year dicing banana peppers...yes it *did* hurt :)

There's a local guy here who makes his own hot sauce...it is divine. I bet yours could give him a run for his money tho.

Wow, you really have a lot of peppers there Sis. You should remember that song, I think it might be on the same album as "Maresy Doats", but I know mom used to sing it.

I'm in awe of your gardening ability.

Geo - this first batch of hot sauce isn't really, really hot - the next one, I'll make a little hotter...

And I'm a little wary of knives, too - took a healthy chunk out of myself once. Yes, it hurt, too!