Out the Kitchen Window

The days are noticeably shorter, and the Bag Lady has been busy. Even though her garden, for the most part, drowned because of the deluge it received early in the summer, she still has enough produce for a lot of the canning she does. Although she had to buy garlic and onions, her tomatoes and peppers produced very well. She has already made one large batch of salsa, and has enough ingredients for another batch. Unless she decides to do something different..... She grew celery this year for the first time (bedding plants because the growing season where she lives is a little short for celery.) She has been amazed at the hardiness displayed by these plants.
It has dropped below freezing several times in the past few weeks, but the celery does not seem to have been affected in the least. And the flavour? Fabulous!

So.... she has quite a lot of celery to use, and has been pondering canning stewed tomatoes rather than making another batch of salsa. She could still use up the onions, garlic, some peppers, and, of course, all those tomatoes.... and she does already have a lot of salsa.

The stewed tomatoes combined with her home-grown beef would make fabulous spaghetti sauce, wouldn't it? Okay, that's what she'll do. She's glad she had this chat with you!

Oh, and here's the view from her kitchen window this morning! 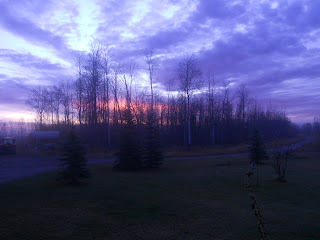 You are making me hungry for salsa!

Oh, the tomatoes would be good.
Good on you for your celery experiment.
And that's a damned fine view.

Should we all consider this an invitation for dinner, or were you just thinking aloud? ;)

What about chili sauce? I have a great recipe from Ambrose's gramma..takes lots of tomatoes and is oh, so good!! Just finished making a 1/2 batch and would be happy to send you recipe.

I love that photo - so striking!

Aside from the cherry and grape tomatoes, most of my plants died off before the tomatoes got ripe. I picked a bunch green, but it was definitely not a good garden year for me. Reminds me, I must get back to the farmers market for more tomatoes so I can make salsa.

My Mom often will can some homemade tomato sauce and I think it's a great idea. You should be able to throw together a spaghetti sauce very quickly that way. :)

I recall my Mum canned tomatoes just once - she used a very metallic pan and it reacted with the tomatoesand the hose smelled horrid. Altho the sauce was tasty she never did it again.
I loved the sample of your salsa and hot sauce I recieved waaaaaay back when - so yummy :)

You have my mouth watering. My grandmother used to make/can the best tomato sauces with ingredients from her garden. I often try to talk my husband into filling in the pool so we could have a garden. He just laughs ;-)
jj

I vote it's an invitation to dinner!

I've never liked celery enough to try to grow it, but I just finished freezing a head of it, shredded and bagged in roughly half cup amounts, ready to add to soup all winter long. Now I have to wait for ripe turnips and do the same to them.

Spaghetti sauce and gorgeous views... how did I miss this post? Must get more organized in my blog ramblings!

That's a very pretty view...much like the skies we're seeing this time of year.

You won't believe this but I actually saw a recipe for a celery salad that looked good. Really. Will try to find it...I think it was in a magazine.

p.s. We grow celery, too, from sets. Celery is one of my favorite/favourite garden crops!