The Bag Lady composed a fabulously witty post whilst lying in bed last night waiting for sleep to come, but now that she's awake, she can't even remember the title. Sigh.

It's been a very busy autumn season around the ranch. Because of the cool wet summer, a lot of the regular ranch work had to be postponed. The last several weeks have been cool but dry, so she and the Rancher have been playing catch-up. On top of the regular fall work, they have been doing some maintenance that could easily have been done earlier in the summer.... if it hadn't been raining.

It's hard to believe that it's almost Halloween! What passed for summer this year passed pretty quickly. She and the Rancher winterized their holiday trailer yesterday, which feels like the day after they un-winterized it.

They sold their calves this week. She marvels at how fast they grew, because it feels as though they were just born about three weeks ago. (Oh, wait, one of them was! And no, he didn't go to the sale with the others.)

Amidst all the work these past few weeks, they did find time for some fun and entertainment. They had an out-of-town visitor who is quite an accomplished musician, so spent a fun weekend making music. Their visitor was even able to teach the Rancher, who has never actually played a musical instrument other than a stereo, how to play a few chords on the banjo! 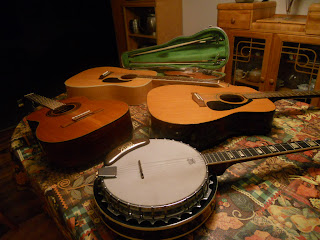 (And they were having so much fun making the music that the Bag Lady forgot to take pictures, hence the rather odd photo of the instruments that were being tortured played.)
Have a wonderful weekend.
Posted by the Bag Lady at 8:11 AM

Good on the rancher for giving the banjo a try.
Have to agree the fall did make up for the summer.

You've got to love a visitor who brings his or her own entertainment.

Any way to help that cow reschedule her calving in the future? No, i thought not, they are ready when they want to be, aren't they.

From the looks of it, your visitor was what my Sweetie calls a gearhea;, not just someone who plays, but who has to have every! last! instrument! that he loves! because they are all his very favorites!

Glad you enjoyed the time with him.

Leah - yes, thank heavens, fall this year was quite pleasant.

Hilary - you are so right!

messymimi - actually, most of the instruments in the picture are mine. Our guest only brought one guitar and his fiddle! (but owning the instruments doesn't necessarily make one proficient at playing them!)

I'm so sad I missed your autumn musical windup. You know how much I love music. I would have rather been harmonizing than going to a wedding anniversary and driving all those miles back in the middle of the night. I can't believe how fast the camping season went either.

Looks like a bluegrass jam session! If so, I am envious.
It sounds like we had identical summer & fall weather.

I'm glad some of those instruments are yours. Good for the Rancher for trying some banjo.

Glad you're getting some dry weather when you can use it. I've had two and a half inches of rain in the past two days. Just when I get the Jeep back in running order it's too wet to drive down in the woods and haul cedar logs up to where I want them to be fence posts. However, I'm sure it will be dry for plenty of time before I get around to actually digging postholes!

I know - how can it be almost November already? I've spent the past few weekends getting the garden ready for winter and I feel like garden season never even happened.

now, how much snow did you get this weekend??

Wow, I always admire people who can make their own music. All I can do is sing off key and hope others drown me out.

Oh, and I have SO MANY fabulously witty unwritten posts, I wonder why the ones I end up with are so crappy?

I really like that picture! Wish I could have been a mouse in the corner listening to you...and I agree that having a musical guest would be a real treat!