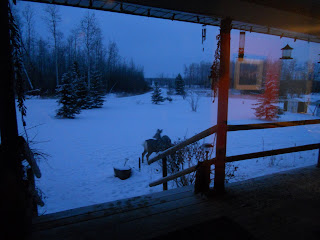 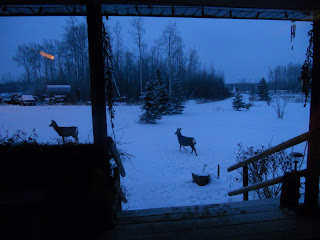 They snacked on some birdseed that had fallen by the deck, then continued on their way. Fortunately, the Princess was sound asleep and not on guard duty at the time, or the Bag Lady wouldn't have been able to get even these poor quality pictures. There are actually three deer in the pictures, but one of them apparently wasn't interested in birdseed. If you enlarge the second picture, you can see him near the spruce tree in the right rear of the photo.
Posted by the Bag Lady at 12:01 AM

I really like that second one, Baggie. You can see how alert they are to sounds. I'd so love to see a deer approach like that. Not gonna happen here in the city.

I live in the edge of our small town and have some woods behind me and across the street. We get deer in our yard quite often. At the back of our house we have a sliding door that opens on a concrete pad about 3'x8' There is a deck that attaches to the other side of the pad creating this narrow strip of concrete with the door on one side and the deck on the other. Our kitchen window gives a view from one end looking out between the door and the deck into the back yard. We have bird feeders hanging there and one day I walked up to the sink and looked out to find a deer up in that narrow slot eating the birdseed that had fallen. It's side was basically pressed against the glass of the sliding door! I couldn't believe it was so brave! We all got to see it up close by being very quiet and slow, the kids loved it! :) They are such graceful animals, I love watching them!

I imagine finding something to eat in that snow is very difficult.

Thanks, Hilary - I am always tickled when I see them that close to the house. Definitely one of the advantages of country living!

Book Nut - it is wonderful, isn't it, when we get to see them up close and personal?

Gail - they supplement their diet with bird seed, and by crawling under the gate into our feed stack and eating from the hay bales!

Bag Lady, good work with the pics. Deer are so skittish. It's a good thing Princess was on her break when it happened. It is a treat to see them.

Leah - it was a nice surprise, indeed. It's fortunate that Princess takes an occasional break!

My kids loved the pics, and so did i.

They are lovely Sis. The city here has expanded so far south now, that we don't know where the deer have gone that used to be just on the outskirts. :( Takes a much longer a drive to go find them.

That must be so exciting to see the deer so close to the house. 'fraid our deer here in NZ are much more skittish.

The deer here don't get a chance at the spilled birdseed. The raccoons get there first. The closest the deer have come to this house is about where that tree straight out from your steps is. Lately I've been getting home too close to dusk to see them on their evening rounds.

Messymimi - glad you and the kids liked the pictures!

Reb - You are quite a distance from the outskirts now, aren't you?

Dawn - it is exciting! I love watching them..... but the Princess loves chasing them, so they don't often stick around!

I like that they just hang out around your place.

Oh, how cute! You're so lucky to have them frequent your yard. We haven't seen anything in the way of deer lately, not even tracks. I don't imagine they're liking this snowy weather, but must enjoy your bird seed.

Sagan - I like having them around, even if the Princess thinks they have no business being in her yard!

Redbush - they certainly do love the birdseed (and the occasional snack attack on the hay and greenfeed, too!)

Love watching deer - they are beautiful creatures. I like that second photo, too. That third deer obviously found something to nibble on over there under that spruce tree.