The Bag Lady thought she'd share a few photos with you of what she's been doing lately. First, though, here is a picture of the sun taken through the haze of smoke that covered her area the other day. The weather channel explained that most of the smoke came from fires burning in Alberta and British Columbia, but that some of it may also have been from Russia (with love?)
She's happy to report that it has cleared away and the skies are blue again! 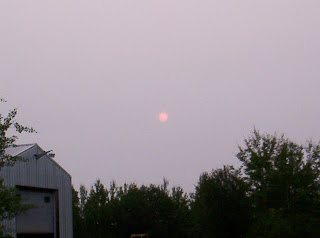 She also decided that it was time to finally take the plunge into debt and replace the old motorhome with something a little more comfortable (with a working toilet!). She has spent a lot of time moving things from old to new: 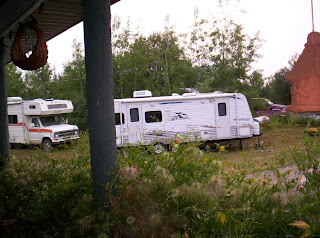 She and the Rancher took it on a test run and the cows seemed to approve: 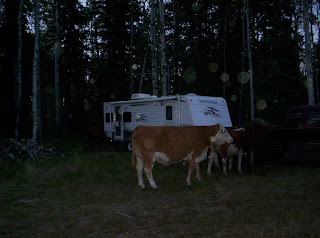 She and the Rancher (mostly the Rancher, to be truthful) have transformed their barn into a storage shed..... 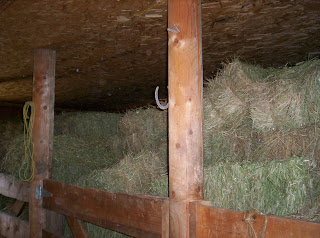 And she was briefly used as a form of transportation (this freeloader travelled with her into the house, but she isn't sure where she picked him up - didn't notice him until she saw him in the bathroom mirror - and back outside again before taking off.) 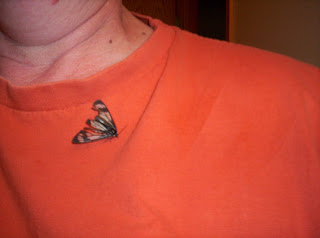 Oh, remember this? It is the Bag Lady's workplace, and one of her responsibilities is gardening. This was how it looked when she first planted the flowers: 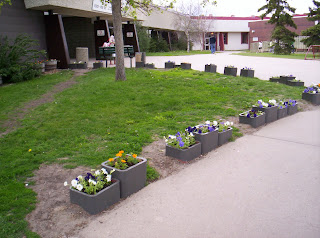 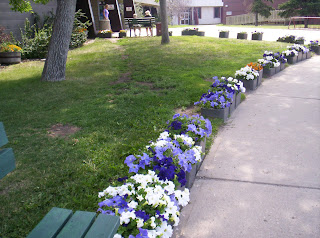 And now she has to go back there and do some painting and other repair-type stuff.
She apologizes for her sporadic posting, and even more so for her sporadic (practically non-existent) commenting on everyone else's blogs. This is definitely a busy time for her (she hasn't even mentioned her own gardening efforts.... perhaps later in the week!)
Posted by the Bag Lady at 7:15 AM

Oh that new trailer looks nice! I'm envious. The only way I'd ever get Husband to go camping is if we had a nice comfy trailer/motorhome to go in.

Those flowers at your workplace really came a long nicely. Looks so cheery!

I love the eerie look the smoke gives the sky, but on the whole I'd rather breathe clean air.
Good to know the cows approve.

Goodness, what a gardener you are!

I hope you and the Rancher get to enjoy a trip in the new motor home soon.

Oh, and how is Emel?

Well, I am glad the smoke has cleared. Love the new trailer, does this mean you will come visit? The flowers at work look great.

Beautiful flowers! Wish you did our landscaping!

Blue skies again - bluebird days :) The only picture that didn't download for me is the "after" photo of your workplace flowers. Everyone else can see it, but I cannot - like the Emperor's new clothes?

Will you be taking the new motorhome somewhere fun? The cows can't trot along. Cheers ~

Can you see Russia from your doorstep?
Hold your breath when you're outside.

Catching up? Good for you.

JavaChick - thanks! I'm looking forward to trying it out this weekend!

dfLeah - I, too, like the strange look from the smoke, but not for days on end. I'm glad it cleared.

messymimi - Thanks! Emel is doing well in his adopted family. He hangs out with his "twin" and they run and play and drive their mother to distraction, just like they are supposed to! :)

Missicat - aw, thanks! It is one of my favourite parts of my job!

Conny - I'm sorry you can't see the picture - the flowers really grew a lot.
We probably won't take the new trailer too far this summer, but next summer? Look out world! :)

Janell - Perhaps not Russia, but definitely Alaska.... :)
Thankfully the air cleared so we are allowed to breath again.

It's so nice when a butterfly decides to hop on a shirt and hang out for a bit. The moths like to do that when I go hiking, too.

Love the new trailer - and your workplace flowers look so pretty!

well, i, for one am tired of being ignored... lolz

That's a nice shot of the flowers lining the sidewalk.

Wow, you HAVE been busy! I envy you your new home-away-from-home. Never thought I'd like having an RV but I think I'm changing my mind

That shot of the haze is awesome, actually, but I agree with Leah...give me clean air, please. I'm pretty sure that if it's from Russia it hasn't been sent with love.

Love the butterfly, too, and the flowers that you planted look fab! Good job!

Mary Anne in Kentucky - how on earth did I miss answering your comment? Sheesh. Hope you are catching up now!

Sagan - that's the first time a butterfly has hitched a ride on me (that I'm aware of, anyway...)

Marste - thanks! The trailer is fun, and to be honest, so is working with flowers at work! :)

David - thanks! We have been getting lots of compliments from patrons at work, which is gratifying.

Cheryl - thank you. I love the new trailer, and going RV-ing can be tons of fun. If you ever decide to take the plunge and buy an RV, you can come to Canada and visit me!!!