The Rancher was working in the bush yesterday and had a visitor.

He happened to glance out and saw this wolf practically right beside the machine he was operating. The wolf passed by and went on his merry way.

(Hopefully, the Bag Lady got it right this time and everyone can see the picture!) 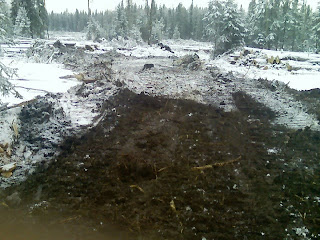 Later in the day, the wolf returned from his travels, and again passed right by the Rancher's machine. The Rancher grabbed his phone and after a little trial and error and fumbling around due to not being accustomed to taking pictures with his phone managed to capture this image. The Rancher said the wolf was much closer than this, but moved away before he figured out how to take the picture. He even tried to get the wolf to stop by whistling. The wolf looked at him, but had his own agenda and, like celebrities everywhere, ignored the paparazzi and carried on his way.

The picture won't load so I'm cheated out of wolfie, but it's cool that he saw one.

I can't get it to load, either, after two tries. Cool that he saw one, and cool that he was inside a nice big machine at the time!

Mary Anne in Kentucky, where timber wolves have not yet migrated

BL, the rancher emailed you the picture I think? You have to use a different link - we don't have access to your email :D

Christine - obviously, I don't have a clue about how to get the picture from my email account into blogger. Sigh.

dfBag Lady, save the email photo to your picture files and then upload it to blogger.
Right click on the email pic and you'll get a choice, I think.

I thought I had saved it to my pictures - does it show up now? (I feel like a cell phone commercial - can you hear me now?)

Whoa! That is so cool! You can tell the wolf is big even though it's far away.

Georgie - the Rancher said it was one of the biggest he'd ever seen!

Leah - glad I finally got it right!

That's terrific! Tell the rancher he did a great job. Boy, it sure looks rugged up in your neck of the woods! Beautiful but rugged.

Wow. Do wolves pretty much mind their own business around humans? I'm familiar with coyotes, and they're typically not dangerous, although I wouldn't trust them in a pack.

Lone wolves generally have a tougher time of it than those that belong to a pack, but he looks big enough to fend for himself (unless he was just heading for home).

Sure is a beauty.

Cheryl - it is a lot less rugged out in the bush than it used to be!

BG - This wolf didn't seem to be afraid of the machine hubby was operating - perhaps he is accustomed to logging equipment. As a rule, we don't see wolves all that often. Coyotes are a different story.

Messymimi - hubby said this wolf seemed to have a purpose - he passed by fairly early in the day, heading south, then returned going north later on. Long commute?

Golly Molly! I should have known you meant a REAL timberwolf... (As opposed to a sports clothing brand or something.)

Melissa - oh, yeah. I never even thought about a clothing brand! *Chortle*

I got it loaded!
and very cool---because I wasnt there.

very...scary'citing had I been as close as the Rancher.

hope this week is starting with LESS PAIN for you, BL.

Miz - the wolf showed no interest in the Rancher (thank goodness!) and no fear of the machine.

And thanks for the good wishes. I wish I could say I am completely healed, but that wouldn't be true.
Sigh.

I don't know that I would be whistling at a wolf to get it's attention, but I do appreciate the Rancher's efforts in getting a photo. Not something you see every day. :)

JavaChick - the Rancher was in a big machine, so I guess he would probably have been safe. He said the wolf did stop and look at him.... that would have been enough to send ME scurrying back into the machine!

Mary Anne in Kentucky - I wouldn't have minded seeing him in real life, but the picture suffices!
:)

That is a damned good picture for a cell phone! Well done Rancher!

Ooh cool! Such an exciting life that you and the Rancher lead. I wouldn't want that wolf to come much closer, though!

Thanks to the Rancher for the picture.

Thanks to df Bag Lady and her cronies for figuring out how to make it available for all of us to see.


Oh, my verification word is haitik. Reminding us to pray for Haiti, I guess.

I see it! This city gal would have been scared to bits!

Reb - it took a couple of tries, but he got it!

Sagan - personally, I agree with you!

dfTerrie - I'm glad they gave me the proper advice on how to share it!

And Haiti is never far from my thoughts!

LOL, wolf whistles! Your rancher has a great sense of humor. Or maybe that is just me up past my bedtime.

I'm glad it was a simple matter of passing by and not a scary situation. I probably would have panicked a bit.

kcinnova - You are the only one who commented on that! I was wondering if anyone else would pick up on it!! :)

My hubby will be impressed! He used to feed foxes from his loader. Don't imagine there were too many p-- breaks taken in the dark! Ha!

Redbush - I know I wouldn't have taken any breaks in the dark!! :)