As some of you are aware, the Bag Lady shares her domain with several critters. The Princess dog rules the house, and in her mind, at least there is a strict pecking order. She comes first (naturally), then the Rancher, then the Bag Lady, then the two cats. The cats, of course, may not feel the same way, but have never really told the Bag Lady their true feelings. They go about their business (eating, sleeping, and occasionally howling at the closet door where their treats are located) and pretend to ignore the dog.

The older cat, Tommy, has been around for many years, and spends a good portion of his time sleeping; curled around a heater, or the base of the wood stove in the winter. He is an excellent mouser, but considers that to be a seasonal occupation, and that season doesn't happen to be winter.

The younger cat, Fuzzy, feels it is his duty to hunt regardless of the season, or the prey! If it moves, it should be hunted down. Even if that means lying in wait on one of the stools at the kitchen island and swatting at the dog's tail when she walks by!

The Bag Lady is a lover of nature, and started feeding the birds in the winter many, many years ago. Once a human has started interfering with nature feeding the birds, the human is obligated to continue because the birds come to rely on that source of food. So, even though the Bag Lady has cats, she continues to feed the birds. She tries to pay attention and make sure that the cats don't hunt the birds, but occasionally Fuzzy manages to escape and spends a lot of time under the bird feeder, waiting for an unsuspecting bird to come within range of his razor sharp claws.

The Bag Lady was working at her computer yesterday afternoon when the older cat started acting very strangely, pawing at the sliding glass door. The Bag Lady got up to see what the ruckus was about and discovered that Fuzzy had a bird in the sunporch! Flinging the door open, she grabbed the cat and threw him into the house, slamming the door behind her. The bird had hopped a few feet away and stopped, huddled down, probably waiting for the final blow. This enabled the Bag Lady to actually catch the poor little creature. She inspected him for mortal wounds, but could see no blood or anything obvious. She took him into the house with her (mostly because it was freakin' cold!) and she and the Rancher inspected him closely. They finally determined that he was not wounded, except for a few missing feathers, and the Bag Lady took him outside again. He perched on her finger and seemed to give it a little thought, then took off. 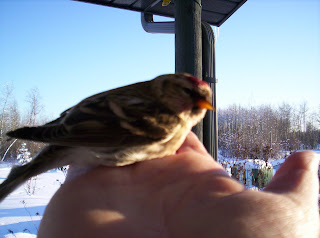 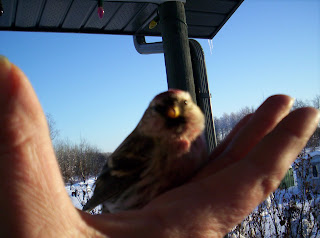 Unfortunately, his flight was a little premature and he did a nose dive straight into a snow bank! Covered him completely. The Bag Lady ran back into the house, struggled into some boots and a coat, grabbed some mittens and went back out to rescue him. She dug him out of the snow and held him in her hand for a minute. He decided to try again, with the same unfortunate result! (It was almost comical, and the Bag Lady wishes she had a video to share with you, but she was too concerned about rescuing him to take pictures! The pictures included here were taken shortly after she saved him from the cat.)

She took him back into the house and warmed him up. Then she placed him in the only thing she could think of that would protect him and allow him to recover completely - the cat carrier!
After about half an hour, he seemed to revive quite well, and started trying to fly around the cage, so the Bag Lady took the carrier outside, making sure the cats were locked in the house, and set it on a table. She opened the door and within a minute, the little Redpoll flew out of the carrier. He weaved a little, but he managed to fly to the spruce tree across the yard where he is (hopefully) telling all his friends and relatives a cautionary tale of his strange adventure! 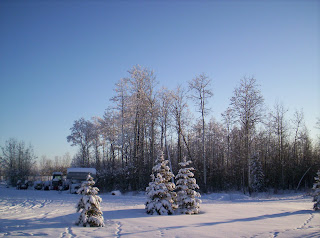 Oh, and Fuzzy cat was treated to a (slightly unwelcome) pedicure the very same day!
Posted by the Bag Lady at 12:01 AM

Oh, our Sam will be putting us thru the same fun and games soon...she loves to stalk and spends hours out doing yard and fence patrol...would attach a pic, but don't know how - will send you one via the old e-mail system - she is chasing the cursor now as I send this message.. once she figures out that she can't catch a bird by hopping like a rabbit..we will need to bell her and rescue the slow ones...

OH MY GOSH. I know I say it all the time but the Tornado would adore living with you.

she gets overthemoon excited when she spies a deer sleeping on our lawn...

Awww you're a good bird mommy. Thanks for sharing that sweet adventure, Bird Lady. ;)

I would love to have a bird feeder, but I don't for exactly that reason. Glad your little one survived.

What a lovely tale of feathered friend rescue. I am sure that Redpoll will dine out--such as birds do--on that story for years.

He does have rather a "What? Why am I here?" expression.

If I could have cats I would want to keep them indoors, not because of the song birds but because of the hawks. (Not to mention the coyotes.) My bird feeders are no more than four feet from the house, for my convenience in filling them in bad weather, but it turns out that the hawks don't want to dive that close to the building so the little birds can eat there safely.

Oh my...I am sure BadCat and BadKitten would be ferocious hunters if I let them outside (haha). Right now my toes are their favorite prey...

What an adorable little bird! I hope he's recovering nicely.

That's fantastic that you managed to rescue the bird in the nick of time!

Sounds like there is never a dull moment on the ranch, even for the cats.

Thanks for sharing those pictures, and I hope the bird recovers well.

Adventure indeed! Fuzzy is such an adorable name. I'm surprised that the bird stayed on your finger for so long- next thing you know, you're going to have all kinds of critters stopping by your place to warm up!

He took the nose dives, hoping you would take him back into that strange warm place!

What a cute expression on his face though.

Thanks for all your comments today! I hope the little bird is among the many who have been enjoying the bird feeder today, but really can't tell him apart from his friends!

It's lucky that redpoll met a pair of Nightingales!

what a cool experience with the bird...so frail in the palm of your hand...glad this one ended well. congrats on the POTW mention!

Brian - thanks so much. I was thrilled to discover I was mentioned on Hilary's blog!
Thanks for stopping by.

I love the expression on the bird's face, he looks so affronted! "You besmirch my feathered dignity...but thank you for the hand, oh giantess!"

Well done on the bird rescue, and I hope the visitor flew back to his compatriots and reported on the most harrowing of bird days!

Congrats on the post of the week, it was definitely a fun one!

Land of shrimp - thanks so much! I was tickled pink to be included in the post of the week!

And I hope the little bird is finally over the shock, and goes on to live a happy life!

I not only wonder what the bird told his friends at home, but what will your cats do the next time they use the carrier? It will smell like BIRD! :)

Cleopatra stands at the sliding glass door and makes those clicky-clacky noises at the birds. The first time I heard her do it, I thought she was having a seizure! Now I know it is just her wild-cat version of a bird call.

That's a good story. Glad you found him before he became lunch. Happy New Year and congrats on Post of the Week!

kcinnova - thanks! My cats make that noise, too. They also shake their feet BEFORE they go outside, but I think that's just my weird cats.

blunoz - Thanks! I was pleasantly surprised to find my little story on POTW! Happy New Year to you, too, and thanks for stopping by!