As promised, here is a little tutorial on making pastry.


The Bag Lady had a half pound of lard left after she portioned out the lard she made, so she decided to make pastry. This meant she had to cut her recipe in half, which took ages (math is NOT her strong suit) -- How do you cut an egg in half? What do you do with the other half?

Anyway, this is 2 3/4 Cups of flour, mixed with1 tsp salt. Oh, and a big lump of home-made lard in the middle. 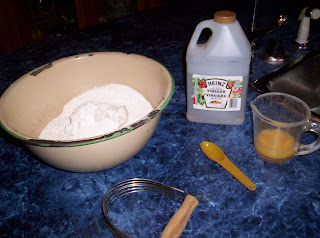 Cut the lard into the flour and salt mixture, using a pastry blender or two knives, until it resembles coarse oatmeal. 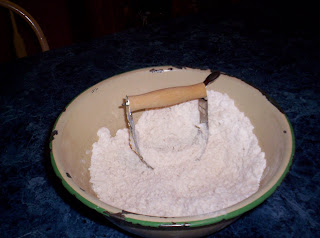 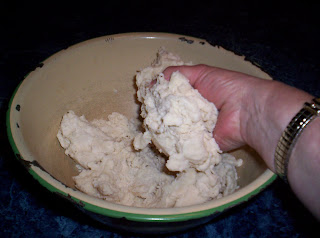 Gather it into a ball: 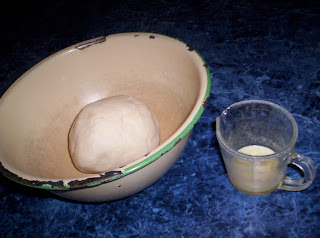 Cut it into three equal portions: 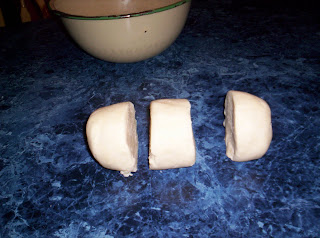 On a lightly floured surface: 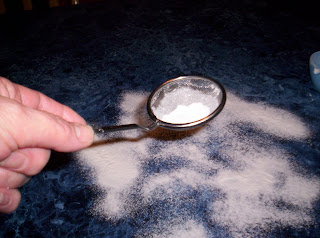 With a floured rolling pin: 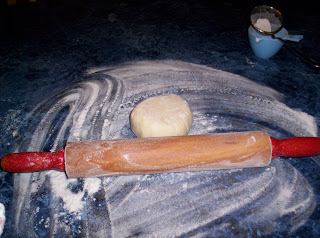 Roll out the dough into a circle: 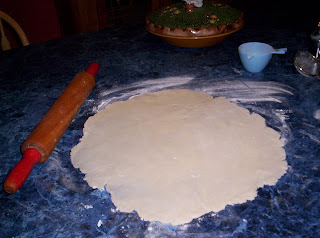 To transfer it to the pie plate, roll it loosely around the rolling pin: 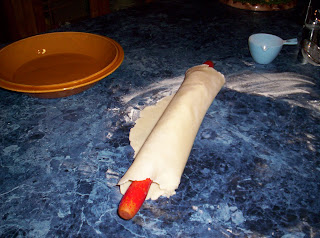 Then unroll it onto the pie plate: 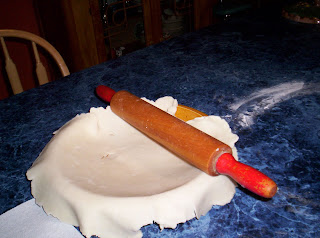 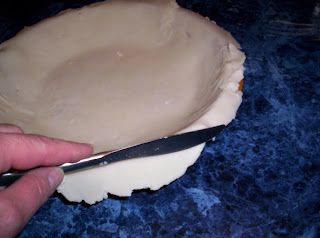 This is where the Bag Lady ran into trouble ... err... forgot to take more pictures.... fill the pie crust with filling of choice (this pie has chicken and veggies with a little sauce), then follow the same procedure for rolling out the top crust and transferring it to the pie. Seal the edges with a little reserved egg/water mixture, then pinch it or use a fork to make a design around the edge. (The Bag Lady is a pincher, in case you can't tell!)

Bake according to your recipe. 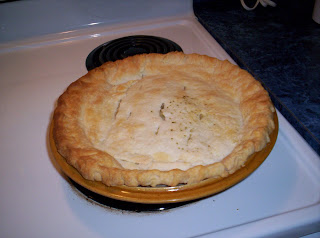 Hope everyone has a great weekend! Now go... go forth and bake a pie!

(Edited to add - forgot to mention, the bowl and the rolling pin belonged to the Bag Lady's mother - the Bag Lady was trying to "channel" her, because her pastry was always the best!!)
Posted by the Bag Lady at 12:01 AM

What to do with half an egg? Give it to the dog, of course! Didn't Princess tell you that?

Coincidentally I made some pie crust last night, to freeze and have ready for quiche when I need it. Or, occasionally topless pies like my family recipe for Amber Pie, which is sort of like chess pie but with jam.

The rolling pin method never works for me. Or I should say: it didn't work for me twice, after which I gave up.

Mary Anne in Kentucky - actually, I did give it to the dog... :)
True confessions time? The rolling pin method has NEVER worked for me before, EVER!! I couldn't believe I actually got photographic proof the one and only time it worked! :)

Marianne - we need to get together so we can trade tips! (As far as transferring it to the pie plate? I almost always roll it out on a piece of floured waxed paper and transfer it that way!)

Excellent tutorial, dfBag Lady. Crust is not my strong suit and the rolling pin method only worked for me once. Mike can do it. I usually butcher the crust as it goes one and seal it, sorta kinda, once it's on.

NB, I stared at the screen for a few slow seconds as I couldn't understand what blackbirds had to do with anything. Fortunately I got it. Good one.

dfLeah - oh thank heavens you got it! I know it was a little obtuse, but I was tired and trying to be witty (which is really hard to do when you don't have a lot of wits around you to begin with....)

Good thing it was chicken. That pie plate doesn't look like it could handle 24 blackbirds. Of course it was a half recipe so that would only require four and eight blackbirds. Still.

Fun tutorial, Baggie. And I love your old, well-used mixing bowl. It's a picture in itself.

I always pinch the edges too because that's how my mom does it. Oh, and the rolling pin method works for me.

Oh, Cousin I do something similar when I use my mom's rolling pin. I call it "The Pie Master" and bring it out when I know I need the help.

Thank you!!! After looking at your pictures, I'm thinking I didn't use enough liquid when I made mine. I couldn't get mine to stick together in a ball like that without pieces falling off. Huh. Good to know what it is supposed to look like! Yummy!

Hilary - and it was only half a chicken! Blackbirds are pretty small, though, aren't they? :)

JavaChick - my mom did, too! Pinch the crust, I mean.

Charlotte - you're welcome. Hope it helped, and inspires you to try again! :)

Thank you thank you thank you! I made a pie last week and the crust just wasn't right. I'm thinking now I didn't have enough liquid in it. It's hard to follow your Grandmother's recipe when it says things like "add water until it sticks together." "Mix until it's a good consistency." So I will be following you step by step next time!

Mmm it looks like the perfect golden brown colour, too! I've been experimenting with different pastry recipes lately. There's a lot of good ones out there but I imagine the best ones are made with lard!

I didn't know you had mom's bowl! Nice to see it after all these years.

I always mix my egg & water, then put it in the freezer until I have the flour and lard crumbly. It doesn't freeze in that short time, but gets very cold and gives you more time to work the pastry.

I also put the ball in the fridge before I attempt to roll it out, but only because I am slow.

I tried the rolling pin method once, then went back to the tried and true wax paper method ;)

I do the wax paper method and after rolling it out I fold the crust in half and then fold it in half again (the other way) so it's kind of pie shaped and set it on the top of the pie and unfold it. Does that even make sense?

Is that vegetarian chicken?

Gena - good luck with your next pie! I've always had trouble with recipes like that, too - especially the ones that say "bake in a moderate oven until done"... giving no clue if "done" will be 10 minutes or an hour.
Sigh.

Sagan - thanks. In my opinion, yes, lard does make the best pastry!

Reb - good idea about putting the mixture in the freezer - I'll have to try that next time.

Cheryl - full disclosure time - I almost ALWAYS use the wax paper method! But not the quartering method you describe - I'll have to try that next time!

POD - of course it was a vegetarian chicken!! Oh, wait, was that what you meant? :)

Mmmmm....chicken pie.
I'm making that this weekend.
Do you make a cream sauce with the chicken and veggies or put it all in precooked?
Mmmm...

Geo - it depends. If I've made gravy with the chicken, I'll use that. Otherwise, I'll make a roux with a little butter and flour, then use chicken broth to make a sauce.

Egg & vinegar, eh? I just use water, but maybe that's why my pie crusts aren't talked about... or maybe that's why I don't even try to roll the crust OVER the rolling pin.
I'm beginning to think I need to pick up some lard and try your recipe. My family LOVES chicken pot pie!!