It's been quite a weekend at the ranch, weatherwise. The Bag Lady and the Rancher spent a lovely Friday afternoon building feeders in the corral to replace the damaged feeders that would no longer hold the oats for the calves to eat.

The temperature was such that the Bag Lady had to change out of her winter coat into something a little less insulated! Water was running everywhere in the yard, and the pasture resembled a lake.

The Rancher decided he needed to do something about the trail the cows follow to the waterer because it was a sheet of ice in places, and under water in other spots.

Here is where he tried clearing the snow and ice off the trail. It rapidly filled up with water. You can see water lying in the pasture in the distance. 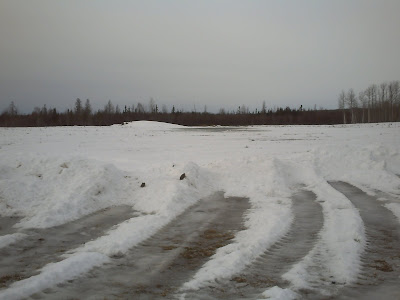 The temperature dropped after the storm blew through on Friday evening, and all that water froze. The Rancher drove his Caterpillar over it so the tracks would break up the ice. It helped a little, but was still very slippery.

He finally resorted to spreading dirt over the ice to give the cows some traction. The last thing they need at this stage is to take a bad fall on the ice and risk losing their calf. (The Bag Lady thought she had taken a picture after he spread the dirt, but she can't find it. ~sigh~)

Here is the Princess, demonstrating the proper technique for four-footed navigation on ice: (keep your head down, apparently... ) 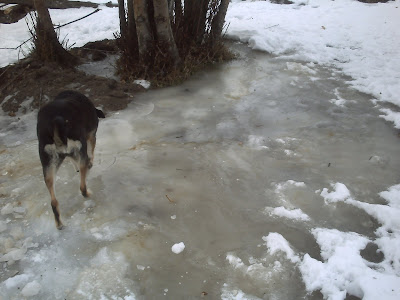 The temperatures are supposed to stay mild for the next few days, hovering around the freezing mark. On the one hand, it's nice to have a break from the bitter cold, but the ice is definitely a problem.

And, finally, this picture makes it look as though the temperature dropped in a really big hurry, doesn't it? 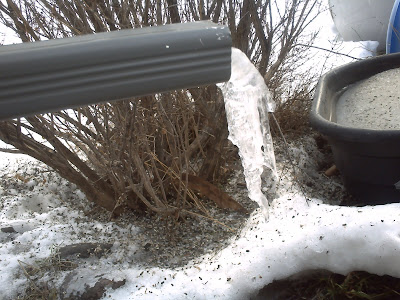 Email ThisBlogThis!Share to TwitterShare to FacebookShare to Pinterest
Labels: ice

Great shots, Baggie. That last one in particular.

We have so many icicles and similar frozen chunks around, and I've been snapping some (still in the camera) of them too.

Yesterday was the first above-freezing day in weeks. We're hovering just below freezing for a couple of days, and then plunging back to the deep freeze.

You can stop sending that stuff this way any time now.

Well, the Princess has the right of it. The parking lot here is just about as bad as you pasture and I certainly walk with my eyes scanning every inch of my path to the office. Love the last photo of the ice coming out of the down spout.

Cool pics!! While you are enjoying? your 'mild' weather, we are buried under over a foot of snow (I would probably be the only one who considered that being 'buried'..but I'm so excited!) I've never seen THIS MUCH snow before!...Our pooch wasn't quite sure what to do with himself this morning, He may have though that underneath the snow was something worth urinating on because as he lifted his leg, the other leg slipped in the ice and boom! crashed into a pile of snow. Poor pooch..you better believe he turned on that doggie paddle real quick. Good times.

That last photo is amazing!!

Your cows are knocked up again? We had a big thaw yesterday, too...

Woah. That's a lot of snow and ice! Yesterday, I wore a tank top outside to walk to the store. We definitely live in different regions!

Thanks, Hilary! I'm sure you've been taking some fabulous pictures over there - can't wait to see them! And if I had any control over what the weather was doing, we certainly wouldn't have this much ice around here! :)

Rupal - holy crap - you got a foot of snow!? That is definitely unusual for you, isn't it? And dogs are so funny when the first snow falls - at least, they are around here. It's like they totally forgot about it over the summer and can't figure out what the heck it is!

Miz - thanks! It kinda reminds me of some of the waterfalls in the mountains that freeze in mid-splatter!

Marianne - those cows had better be knocked up again, or the bull isn't doing his job!

Poor cows. I've seen the deer trying to walk down the drive in front of our house when it's all icy and I feel so bad for them. It reminds me of that scene in Bambi though.

You all be careful with all that ice, human, bovine, and canine alike!

JavaChick - I've been thinking a lot about Bambi lately, too! Especially with some of my own near-misses! (I call it "doin' a Bambi")

We're finally getting the warm weather you're sending our way BagLady. We have ice all over the place too. Some under the snow and about 2 inches thick on the snow. Our poor boxer is having a tough time navigating.

Princess is right! One must look at the obstacles on the ground in order to be prepared for a slip-slidy spill. My front walkway is a mix of cleared pavement, thick blobs of ice, and thin nearly-invisible patches of ice. Getting to and from the bus stop is an adventure! We tried to break it up yesterday in our 50-60F degree weather!! but even so, it remains.
Snow expected again tomorrow. Please make sure you send us some!

Great final pic in your series! :)

Tom - the Princess has had a few problems, too, but she still wants you to throw her stick so she can chase it....
Glad to hear your weather is warming up!

kcinnova - I have to admit, there have been a few spots in the yard where I was tempted to get down on all fours in order to navigate! :)

The weather has been so strange lately, in Florida too. I hope all your cows make it through the season safely.

Wow - great pics! Definitely be careful....was out walking yesterday morning and ran into lots of ice that is still sticking around here. Didn't fall, fortunately, but came awful close!

I've still got snow on some of the roof after temperatures above 50F yesterday. Twice I was looking out the window when huge sheets slid off the roof and exploded on the ground. Exciting, but incomplete. When I drove up to the road to check for Saturday's mail, it was slicker than the day before because of all the water on top of the ice and snow.

Missicat - you be careful, too! I haven't fallen yet, but I've done a few of those really graceful-looking, arm-flailing dances. :)

Mary Anne in Kentucky - ah, yes, aren't ice-storms wonderful? It is snowing here now, putting just a fine dusting over the sheets of ice so they can catch us unawares!
What a winter.

I get cold just looking at those photos. When does spring come up there?

I don't understand the weather. It's crazy. Hard to navigate footing once all that water freezes, too! The Princess is so cute :)

BG - spring comes when it damned well feels like it! :) Actually, it can come as early as March, and as late as the end of May! I'm hoping it will be early this year.....

Sagan - This has been a really crazy weather year, hasn't it?
Thanks, the Princess thinks she's pretty cute, too! :)

Golly I feel so sorry for the cows! Very interesting icicle off that spout! Looks like something that would happen in a cartoon.

Wow...hope the cows are skating to the water alright. It's been warm cold warm cold here too, but not quite that warm. Yet.
I wonder if they make those little slip on spike shoe treads for cows yet? :)

What great pictures! Isn't that ice something else?! I looked out my basement window and saw a bull moose heading toward our pick-ups, so, he was pretty close. He then turned because our dog barked in the garage. He ambled very slowly down the road, so, I think he was being extra careful on the ice, too! You better get those ice-protectors on your boots!

Melissa - I feel sorry for the cows, too - the dirt did help, though, so hopefully none of them will fall.

Geo - maybe that's what I should try to do - make spike shoes for the cows! :)

Annette - I'm ready for spring, too, but somehow, I don't think it's coming right away!

Redbush - if even the moose are treading carefully, it's definitely icy!