The Bag Lady has been watching television lately (yes, incredible though it may seem!) and has been catching up with a program called "Ancestors in the Attic" (or something like that...). She has always had an abiding interest in genealogy and spent an entire winter on the internet, researching her family tree.

One of her ancestors fought in the Civil War in the States, and died in the service of his country. Many soldiers died during the war; some on the battlefield, some from wounds received during battle and many more from disease. The Bag Lady is of the impression that her ancestor died of a disease. Here is the only known picture of Eber. He was the Bag Lady's great-grandmother's brother. 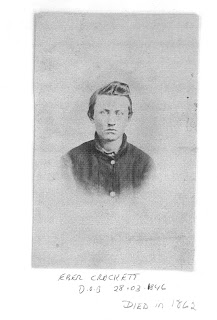 If you look closely, you can read the dates under his picture. He was 16 years old when he died in Bolivar, Tennessee on Sept. 22, 1862.

She believes he is buried in Harrison, Henry County, Ohio, (her memory fails her right now) and wishes she could travel there to try to find his grave. Unfortunately, that is not feasible, so she wonders if she has any readers in Ohio who would be willing to search for his gravesite. If so, please contact the Bag Lady at the email address in the sidebar.

Have a great weekend!
Posted by the Bag Lady at 8:31 AM

BagLady, What a really neat thing to offer. Checking on your own family history is very eye opening.

Tom - it's great fun! I found a huge amount of information - my only regret is that I didn't find it before my dad passed away - he would have been thrilled with it all - he was very interested in our family history!

Wow very cool idea. I sure hope it yields a response. Good luck. :)

dfLeah - Eber has always fascinated me, too!

Hilary - Thanks! I thought it might be worth a try - someone out there might be able to help!

I'm quite a ways from Ohio, but if I lived there, I would most certainly help!!
Great post! I love when you share your old photos and the stories that go with them.

kcinnova - thanks! And thanks for the idea for a post today! :)

Checking out the family tree is really interesting, Bag Lady! Great post and fabulous information! I've been checking out my family tree as well, and can't believe some of the names of people in my ancestry from way back! Have a great weekend and enjoy the sun!

Sorry I'm nowhere near Ohio. I have an ancestor who died in the Civil War, too. He was from one of the Maine regiments and died at Andersonville prison.

And on my father's side, I'm descended from a Disney character! Seriously. Make of that what you will.

Oh, I hope someone can help you with that. Good idea.

I really love learning about family history. Last summer my grandpa showed me all the grave sites (and his future plot... morbid but he seemed quite cheerful about it!) and a ton of records he's kept. It's fascinating stuff!

I hope that you do get to learn more. If ever I head out that way I'll let you know :)

Wish I could help! I'm a history freak. I actually have about half the credit hours toward a graduate degree in history--but then I had to quit and do music instead.

My sister lives close to Cincinnati--I wonder if she ever gets over to Harrison.

Great post - I do need to research my ancestors more, I have heard we have a few real characters in the bunch! Wish I lived closer to Ohio....

Redbush - it is very interesting, and lots of fun! Have a great weekend, too.

BG!! A Disney character? Will you share with us which one?

Thanks, Reb - I hope someone will be able to help, too!

Sagan - it's great that you grandfather has lots of records - it can become a bit of an obsession though.

Missicat - you've perhaps got some family history in Ohio, too! As I understand it, it was a staging area for forays west.

I love looking at my ancestors. I'm from Kentucky but don't have kin in Ohio.

Mark Twain is actually my Great (x5) Uncle and my Tween loves telling people that. Just wish I more picture - didn't get any from my Grandmother when she passed, and no one else seems to know where they are. Odd, huh? Vee at www.veegettinghealthy.blogspot.com

Vee - Mark Twain!!?? Way cool! The closest I can come to anyone famous is a really, really distant maybe not even slight chance of a relationship to Davy Crockett. Maybe.
:)

Gena - it's amazing how much information is available on the internet! You should skip on over to Rootsweb.com and see if you can find anything!