The Bag Lady has an abiding interest in genealogy, and has spent quite a lot of time researching her family history. This has been made easier for her by the fact that some of her ancestors were Swedish, and really good record-keepers! Over the last few years, she has discovered that her ancestors were, on her father’s side, Swedish, English and German, and on her mother’s side, English, possibly Irish and German. Little wonder she has such a fair complexion, eh?
The internet has been an incredible help in her search. Bless the Roots Web people! Most of her ancestors on her mother’s side have been in Canada since the 1700’s, mostly on the eastern coast. Her father’s father came from Sweden, via Russia, and some of her father’s mother’s family has been in North America since the 1600’s. One of her great-great uncles died in the American Civil War. She even has a photo of him! 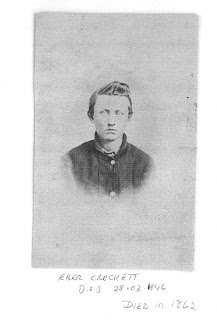 Her father’s grandmother was an amazing woman. She traveled to Nebraska from Ohio with her family as a very young girl, lived there for long enough to marry and have a family. At the age of 29, while pregnant with her 7th child, her husband died. In 1901, at the age of 44, after raising her family alone, she became a pioneer again, moving to Canada to start a new life. All of her children and several of her sisters and their families immigrated to the same area in Alberta, which was then part of the Northwest Territory. Her maiden name was Crockett, but there is no direct connection to Davy Crockett that the Bag Lady can find. 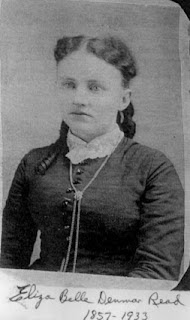 The Bag Lady would love to travel to some of the areas where her ancestors lived to try to find traces of them, but that probably isn’t going to happen. She already dragged the Cowboy on a graveyard tour of Alberta in search of ancestors, and she’s pretty sure that isn’t going to happen again! Some of the areas she would like to visit include Nebraska, Ohio and Maine in the U.S. and Nova Scotia and Prince Edward Island in Canada. She would also love to travel to England to continue her search. She hasn’t had much luck on the internet with her search on the other side of the ocean.
She wonders if any of the rest of you have an interest in your family history. Have you traced you ancestors to the Mayflower? Or do you not care at all? Don’t even know your grandmother’s maiden name? Couldn’t care less? How do you feel about this?
Posted by the Bag Lady at 7:25 AM

dfBag Lady - Thanks so much for doing all this searching for us. It's good and grounding to know where you're from.
My resemblance to our great-grandmother isn't as startling it was when I first saw it. I look like my mother, and that was the first time I saw a resemblance to an ancestor on dad's side.

I hope you find your Civil War ancestor pic soon so you can post it,too.

dfLeah - found the photo of Eliza's brother, who died in the Civil War.
The Bag Lady may not be around much today - slight medical emergency unfolding.

I hope it is only a slight emergency. Human or animal?

They definitely made women tough then! My grandmother was an itty bitty woman in North Dakota, but taught big ol' farm boys in a one room schoolhouse.
Great photos!

But perhaps you'd have better luck getting company on your proposed tour if your relatives hailed from Hawaii, Tahiti, and Bermuda instead of Nebraska, Ohio and Maine!

The Cowboy was injured at work and the Bag Lady has to go fetch him. If, that is, the relief driver ever gets to where the Cowboy is, in order to bring him and the big truck back to the shop. The Bag Lady may have to go do that, too!

Missicat, it really is amazing, isn't it, those itty bitty women were so tough. Both of the Bag Lady's grandmother's barely reached 5 feet tall with their shoes on, but worked right alongside the men.

Crabby, you have a point...more exotic locations needed!

My Yankee family has a full record going back to a relative of the first governor of Plymouth Colony. My Hispano family is a little murkier, although I'm a descendant on that side of a man who later became the subject of a Disney movie and TV series.

I qualify for DAR on both sides of my family. Not so surprising with the Yankees, but on the Hispano side, it seems that my Montoya ancestors (descended from one of Onate's conquistadors) gave a nice chunk of change to the American Revolution, which qualifies me.

As far as the Old Country is concerned, my Yankee family can be traced to York in England and County Cork in Ireland. The Hispanos go back to Estremadura in Spain. One of my Hispano uncles has befriended some of our long-lost relatives in Spain, which I find amusing. :-)

BL, I hope the Cowboy is okay! Update, please!!!

Bunnygirl - that is so cool that you know so much of your family history! The Bag Lady is really interested in this kind of stuff. Wonder if we qualify for DAR - not only did the great-great-uncle fight in the Civil War, so did his father, our gr-gr-grandfather.

The Cowboy injured his back doing something at work and can barely walk. He couldn't use his left leg to push in the clutch on the truck he was driving, so his employer had to send a replacement driver out to get him. The Bag Lady picked him up from the shop and brought him home, where he is resting. Thank you all for your concern.

Glad to hear that it wasn't something that involved loss of bodily fluids or parts! Hope he feels better soon.

The Bag Lady is pretty happy, too, that he still has all his parts, even if they aren't in the best working order at present.

Leah's image immediately jumped right out of that photo when I scrolled down to it. I was going to say so and even risk finding out that she's not even from the same side of the family. Then I read Leah's comment. The resemblance IS startling. I don't even know Leah beyond her blog photo but I could see her all over your ancestor. Amazing stuff.

I love cemetaries. I find them to be fascinating and full of untold stories. I used to spend a fair bit of time in Massachusetts, in a small town called Winchendon. There was a large cemetary there and I'd often wander around reading what the old gravestones might reveal. I was thoroughly surprised one day to see two small, simple stones, father and son with the surname of White, both of whom died at sea. The father was lost at sea. The date was familiar... April 15, 1912. We checked it out online and sure enough, they had been passengers on the Titanic.

I'll wander a cemetary any time with you, Baggie, but maybe you could take Crabby's suggestion and research ancestors somewhere tropical.

I hope the Cowboy recovers quickly. :)

Hilary - the Bag Lady was wondering where you were! You're on - we can go wandering graveyards anytime. Actually, it would probably be more fun in your neck of the woods because this area of the country has only been settled a short time in comparison to your area. That's why I'd love to go to some of the other areas where my ancestors lived - Tancook Island, off the coast of Nova Scotia, for example. My mother's people lived there in the 1700's.

That is so cool about finding those Titanic gravesites!

Leah definitely resembles our gr-grandmother, and Leah's father resembled Eber, the one lost in the Civil War.

The Cowboy is still in pain, but his sense of humour survived. He was watching TV yesterday and a commercial for insurance came on:
"If you're over 50 with a clean driving record...blah blah blah". The Cowboy pipes up, "Guess I can give them a call on Monday!" (The Bag Lady has a birthday on the weekend!)

I don't think I'm going to be around too much on the weekend, so I'll get my birthday wishes to you right now. The Big Five-oh, eh? You don't look a day over 49! ;)


Happy Birthday Baggie! I hope it's a great one. :)

Thanks, Hilary. You obviously got a good look at the Bag Lady this morning (baggy doesn't even begin to describe what's going on under her eyes!!)

Now, now Ms. Bag Lady, you assured me that if I was going to call you "Baggie" that you would not take it the wrong way and assume wrinkles!