This Arctic system rolled down in the wake of a heavy snowfall, which is not at all uncommon. Most of our warm weather comes across the mountains to the west, pushing warm, moist air. What was rain on the coast turns to snow when it meets the cold air here. Eventually the cold air from the north wins and pushes the snow out of the way, freezing everything in it's path.

Coping skills. That's it! How do you cope with bad weather? The Bag Lady tends to hunker down in the warmth of her house sitting at her computer, playing solitaire for hours, moving very little and attempts to find engrossing tasks to keep her occupied. She will clean closets, re-organize kitchen cupboards, do some kind of craft, read many, many books, or bake and cook. Baking and cooking serves two purposes - the heat of the oven helps warm the house, and the results are usually comforting.

Yesterday, she did a variety of things. She read a terrific, engrossing book ("Alex Cross's Trial" by James Patterson & Richard Dilallo) and cooked. She made cookies to put in the Rancher's lunches, and dessert for supper (a mixed fruit crisp with an oatmeal topping) and she cooked a Prime Rib roast. She also made Yorkshire Pudding and was very pleased that they rose to previously unheard of heights! She remembered to take a picture (after she started eating, ahem) but the angle she used doesn't show the Yorkshire pudding to the best advantage (she was trying to hide the fact that she'd already eaten part of one) 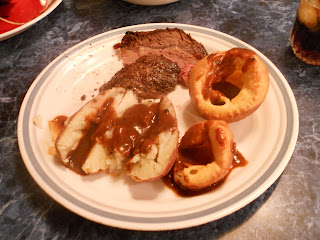 She was so excited about the pudding turning out so well, she forgot to cook another vegetable! (Which was just as well, because she couldn't eat even half of the baked potato on her plate)
And she needs to explain that she cooked the Prime Rib roast, which is ordinarily something she reserves for company, because it is rapidly coming up on time to take another load of beef-on-the-hoof to the abattoir to become frozen beef-wrapped-in-brown-paper, and she needs to make room in her deep freeze.
Posted by the Bag Lady at 8:33 AM

Thanks, cousin! Yorkshire Pudding is actually quite simple. I used a slightly different recipe this time and it worked like a dream!

Where is the green vegetable?

My husband cooked dinner last night (some strange but tasty ground beef meatloaf-y concoction). I mashed the potatoes for him, and he peeled some oranges but he totally forgot the green veggies, too!
Both you and he had the goal of cleaning out the ice-box, but sheesh! Prime rib with Yorkshire pudding? There's no question of where I would have preferred to eat dinner!!

Also, the sentence you crossed out about how you spend your time on cold days? We have this in common. ;)

Janell - I served (store-bought) sugar snap peas and mini-cucumbers, so they were in a bowl... everything on the plate was either home-grown or home-made.

kcinnova - I don't know... weighing the difference between having someone else cook, or eating prime rib? That's a toughie! :) (besides, I ran out of ground beef, so now we're 'forced' to eat the stuff I was saving for guests! LOL)

Looks wonderful Sis. Sadly I have to go out today :( Hopefully the buses are on schedule today.

I've never cared for roast beef (I'm weird, I know) but my Mom used to make a biscuit type pudding when she did a roast beef. I could care less if I ever have roast beef again, but I wouldn't mind some of that pudding and gravy. :)

Husband and I were complaining about the cold last week. Our weather keeps going back and forth between cold and warm[ish]. So early in the week were were complaining about the cold and by Friday it was warm[ish] again. I'm not going to complain about warm[ish] weather this time of year, but it sure does get confusing. Honestly, if I had my way, I would hole up in the house during the really cold weather too. Unfortunately, I have to go out and go to work.

That cold weather sure makes you think of things that need doing in the house, but, that's about as far as it gets for me. Ha! Yorkshire Pudding is something I can't say I've really tried, but, it looks scrumptious. BGL, you're way too creative! It makes me feel lazy!

Ooooo, that looks good. I've never tried Yorkshire pudding, but I might have to, now.

I'm drooling here. It's probably a good thing that I'm not drooling there because it sounds so much colder than here and icy drool is just not attractive.

Reb - I hope the buses are on schedule for you, too.! Stay warm!

JavaChick - ooh, I wonder what kind of biscuit-type pudding she made??
I never complain about warm weather, either - it's all too rare!

Redbush - I can't believe you've never tried Yorkshire Pudding! Remind me to make you some!

Marste - you, too? Sheesh, I'll have to post the recipe for all you folks who've never tried it!

Hilary - and it would freeze really quickly here! :)

Cold is something you deal with well, it is obvious. Not me, i'm a creature of the south and think you Northern Peoples are very, very tough.

Good food goes along with that toughness.

messymimi - if you knew what a wimp I actually am about the cold..... :) On the other hand, I can't stand too much heat, either. I always tell myself that if I'm cold, I can always put more clothes on. Once you're too hot, it's difficult to remove your skin.

I'm another who has never tasted Yorkshire pudding. (Just what I need, a new way to consume starch, right?)

In cold weather I spend a lot of time trying to stay warm. I recommend laptop computers: the multitasking hot water bottle! I prefer to spend most of my time indoors, next to a fire. But that led me to spend an hour outdoors today moving wood: some indoors next to the stoves, a lot more into the vacant sheltered space that I'd just moved the last wood out of.

I tend to bake sweet potatoes one at a time, instead of baking a lot together and then reheating them. Wasting electricity, but making the kitchen feel (and smell) good.

Love your blog....and yes, LOVE Yorkshire Pudding, and there's just about NOTHING better than when it raises like it's supposed to! :)

Mary Anne in Kentucky - I'm shocked at the number of you who haven't had Yorkshire pudding! I guess I'm just going to have to have all of you come over for supper!
Love your laptop/hot water bottle idea!

Queen Tracy - welcome! And thank heavens someone else loves it, too! (My blog, I mean.... kidding!) Thanks for stopping by.

Before I read your post I had absolutely no idea what Yorkshire pudding was. I feel enlightened now. Thank you! As for dealing with the cold, I'm terrible at it. My primary defense is whining a lot and sitting on the heater vent in my kitchen.

Charlotte - glad to be of service! :) I can relate to sitting on the heat vent - I've been known to do that too (and that's part of the reason I have a heat vent right where I stand when I'm doing dishes!!)

bake muffins and hunker under a blanket to watch a movie or read a book. Lately, it's been do homework...*sigh* :)

Geo - hunkering seems to be a common response! :)

I looooove Yorkshire pudding. My dad used to make it often when I was a kid! This all sounds so drool-worthy.

I cope with the cold by keeping a mug of tea glued to my hand and by carrying my portable heater around my condo with me :D

I LUV Yorkshire pudding!!! Love, love, love it! And popovers.

Icy drool...Hilary KILLS me! But she's right. It would not be attractive AT ALL.

Our weather is a lot like your weather so I can identify with you on that. I do a LOT of baking when it's cold. A hot brandy on a cold night doesn't hurt, either! Happy to share my recipe if you need it.