As the Bag Lady was busy preparing for her Christmas feast, she glanced out the window and saw that there was a visitor in her yard! 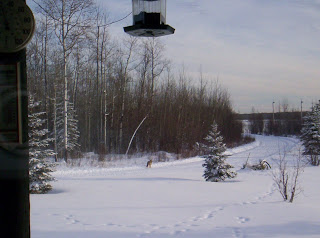 The Princess happened to be sleeping beside the door, so she didn't see the coyote right away, which allowed the Bag Lady time to get the camera and take a picture. When the Princess awoke shortly thereafter, she spied the coyote and set up quite a ruckus. The Bag Lady, however, refused to open the door because she could see what the Princess could not - there were at least three more coyotes out in the pasture not far away, which meant that the Princess would be outnumbered.

The bold coyote who had ventured so close to the house heard the Princess roaring, and quickly rejoined the rest of the pack and convinced them that it was time to move on. The Princess eventually settled down and forgave the Bag Lady for not opening the door. 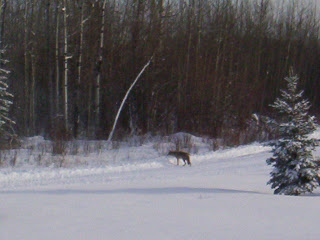 It is not at all unusual to see coyotes around this area, but the Bag Lady rarely manages to get pictures of them. In spite of their boldness, they move away quickly when they feel threatened, and most of the time when the Bag Lady sees them, she doesn't have her camera close at hand.
Posted by the Bag Lady at 8:02 AM

Really good shots. I am sure the Princess has forgotten by now and forgiven you :)

Well done. I know how difficult it is to get a good pic of a 'yote.

Very cool! The snow is gorgeous. Hope your Christmas was very, very merry.

He looks like a good, healthy one. We have coyotes around here.. there are sightings in the park all the time. I've still never seen one, myself. I'd love to get a good photo of one.. or at least see one! I'm impressed. :)

He can afford to be bold with the woods to disappear into. Lucky shot!

I am impressed by the view and your photography.

Coyotes are very rare around here, I've never been even that close to one.

Thanks, cousin - I've been trying for quite some time to capture one on film!

Cheryl - we did have a lovely Christmas, thanks! How was yours?

Hilary - yes, he was in good shape. Must be lots of mice around.

Mary Anne in Kentucky - I was glad to finally be able to share a picture of a coyote with everyone!

Messymimi - we see coyotes quite frequently, and hear them even more often. A few years ago, the Rancher had one follow him when he was walking in the woods with the Princess (she was still a pup) - the coyote was so close at times, he said he could have hit it with a stick! It followed him for about two miles, yipping and crying - very strange behaviour. When the Rancher got back to camp, the coyote must have decided he was outnumbered when he saw the rest of us, and disappeared.

Very cool. We have coyotes in the city. They're at Memorial Park and I've sometimes seen them when I've been there before dawn or after about 8 pm. They're quite shy on their own, but I wouldn't trust several of them in cahoots!

BG - that's a wise decision - they can be dangerous in a pack!

That so great that you were able to capture the coyote on camera!

Coincidentally, our midnight-marauding racoons have returned, coming through the cat door again. Perhaps we can borrow old Wile E. for guard duty?

Hope your Christmas was wonderful!

And thank you, yes, we had a very nice Christmas! Hope yours was great, too!

That's cool. We don't get too many coyotes around the 'Peg ;) Definitely good that the Princess didn't get to go outside and "play" with him, though!

OMG - Cool pictures, but I would be afraid!!

Sagan - the Princess is so protective of her yard, she kind of loses her mind if she sees anything like coyotes, deer, birds..... and chases them. It's always a worry!

Aleta - I don't mind seeing the coyotes when I know the dog is safe inside!