It's been a busy week around the ol' stump ranch, and the Bag Lady and the Rancher have been working fairly hard.

They ran out of pasture for their cows here at home and decided they had to move them to new pasture, but in order to do that, they had to do a little fence-building. So they loaded up the truck with some supplies and off they went: 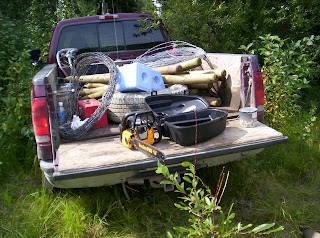 Here is the area they needed to fence. It is a "beaver lake" that has dried up. With the drought conditions, the beaver have left for wetter pastures, and the water has disappeared: 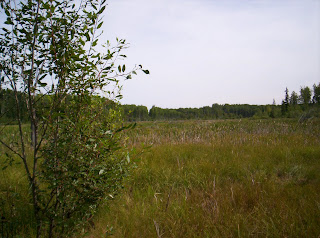 Originally, the water came up to the end of the wooden rail fence (see where the Rancher is standing? That used to be too wet to walk in): 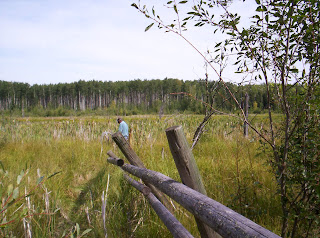 The Rancher pounded posts (by hand!) With this: 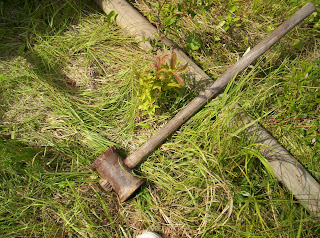 And then they strung some wire: 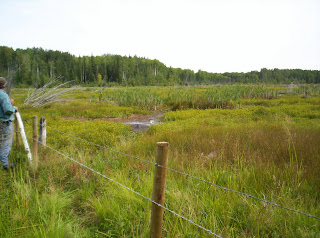 Of course, the Bag Lady had to investigate the flora (she is pretty sure that this is wild mint - at least, that's what it smells and tastes like!): 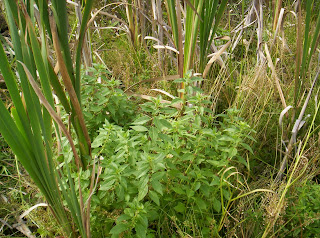 When they finished building the fence, they had to drive around the rest of the fence line to make sure it was all up, and while they were touring around, the Bag Lady was happy to see lots of hazelnuts (filberts) on the bushes (there weren't any last year): 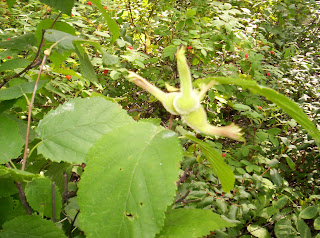 She also spied some high-bush cranberries (and remembers exactly where they were, so will probably be doing some berry-picking very soon! Cranberry jelly for Thanksgiving is in her future!): 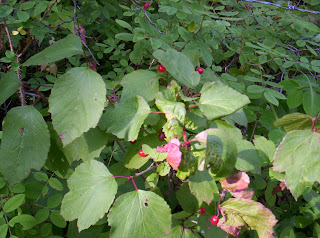 She and the Rancher will probably spend some time camping in the area on the weekend, and she's hoping to pick some cranberries and hazelnuts and might even lift a beer or two - it's supposed to be around +30C (86F) - perfect weather for stumbling around in the bush, picking berries!

Have a great weekend, everyone!
Posted by the Bag Lady at 12:01 AM

So, building fences makes the Rancher a PhD, right? Post-hole Digger? Sorry, couldn't resist, that's what the Burma-Shave people called their men in the field who dug the post holes for their signs!

Picking fresh berries, nuts, and mint, and using them through the winter -- ah, I might not envy you your winters or your ranch work (which is very, very hard indeed), but I do envy you this.

I hope you enjoy your weekend!

Nuts. Yes, it's time to walk down the hill and check under the hickories. By the time my sprained knee was up to it, the blackberries were gone, but it looked as though there hadn't been very many of them in this very peculiar weather.

Fences. Let me leave that thought for another day.

If the cows eat some of that wild mint, will the calves have minty-fresh breath? ;)

I love seeing these pictures (in words and in photographs) of your life. Work hard, play hard! That definitely deserves a few brewskis!

Hmmm. Nuts, berries, bear tracks. Does that really mix with camping? Better make sure the rancher brings his post maul!

Be careful out in the wilds this weekend!

Enjoy your weekend! Thanks again for the pics and a glimpse into your life up north - quite a difference from Washington D.C. :-)

Messymimi - LOL! I had forgotten about the PhD.... (I'll have to start calling him Doc Rancher)

Mary Anne in Kentucky - it has been a strange year, here, too. The domestic raspberries didn't grow (apparently) but there seem to be lots of them in the bush. And I was surprised by the number of hazelnuts. Perhaps, though, the squirrels just haven't started their harvest yet, and by the time I get back, the nuts will all be gone!

kcinnova - I'm not sure if the mint will help the halitosis problem or not, but it sure wouldn't hurt! :)

Marianne - nuts to the post maul, I'm making sure he brings the rifle!! :)

Scrumpy - thanks! We are always careful.

Missicat - glad you enjoyed it. Hope your weekend is great, too!

Oh my that's scary about how dry it is. Good for you for getting all that fencing done.
Gotta say I find hazelnuts cute. Those little caps.
I love the smell of wild peppermint.

dfLeah - it took me a little while to realize what I was smelling! And wow, it really packs a minty punch, doesn't it?!

dfTerrie - it IS, it IS! I just love wandering around in the bush, finding all kinds of edible things!

Stay close to the brews and away from the bruin.

Great pics sis! Looks like the cows will have a grand ole time. Careful camping!

Oh my that sounds delightful.

Sparrow - I'm thinking beer in the shade without bears would be the best!

Reb - Thanks! And don't worry, I am always careful when camping!

it looks so peaceful! well, everything but the hard, manual labor...
have a great weekend!

p.s. I need to be stopped! I just txted the photographer out of the blue some random txt message. I must be stopped!

Nifty photos, Baggie. I never knew you could just go find and pick cranberries like that. I love cranberry sauce. :)

It seems our weather so often criss-crosses. We're on a bit of a cooling trend.. low 20s and mid-to-low teens overnight. I want my summer back!

Hilary - I love picking berries - wild raspberries, blueberries, cranberries.... they are all out there at one time or another through the summer.
And it's strange, isn't it, how our weather seems to cross?

I forgot to ask this morning (I was still drinking my first cup of coffee) what kind of wood are the fence posts? and did you grow them your ownself?

Mary Anne in Kentucky - those are treated spruce posts - we buy them in bundles. We do have some fencing put up with "home-made" tamarack posts - still standing after many, many years.

Spruce--no wonder I couldn't recognize it. I don't think I've ever seen any that wasn't being a Christmas tree. Not that I'd recognize tamarack, either. Cedar is a preferred post around here, but not the only favorite.

Mary Anne in Kentucky - plus the fact that they dye it a funny colour (sorta yellow/green) when they pressure treat it! Spruce is abundant here, but we don't have cedar. Tamarack used to be the preferred wood for fence posts - it didn't need to be pressure treated to last a long time. We don't have much in the way of cedar up here.

You should take Dad out to that dried up beaver dam area...he could probably tell you when, (if ever, in his 80 odd years) as to whether it has been that dry.

Good idea, cuzzie! We might have to do that. He'd probably enjoy a little tour.