As promised, here are some pictures of the Bag Lady's attempts at rendering pork fat into lard.
She researched the matter extensively (*ahem* - she asked her sister-in-law's mom how to do it) and went about it in a very scientific manner.

First, she chopped the pork fat into small pieces: 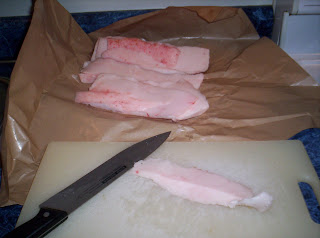 And placed them in a deep, heavy pot: 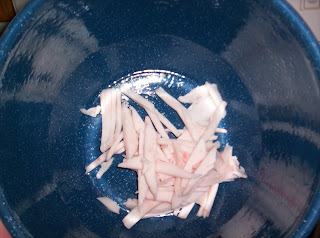 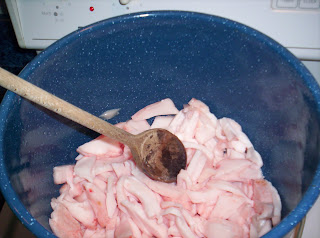 After a time (during which she went to town, ran some errands, cleaned her house and did a multitude of other things) she took them out of the oven and put them back on the burner: 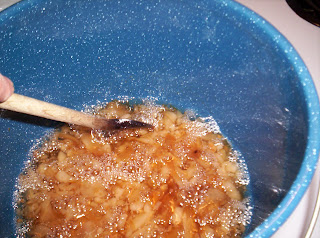 She strained off the liquid fat, then returned the remaining fat to the burner on medium heat. She did this a couple of times. 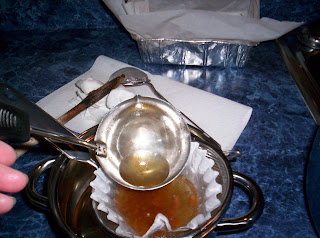 And she was rewarded with this (in case it's difficult to tell from the picture, this is a foil loaf pan, lined with parchment paper into which she poured the liquid fat) 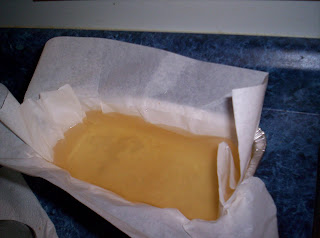 She carefully placed her loaf pan into the fridge and in the morning, she had lard: 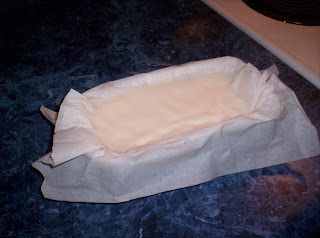 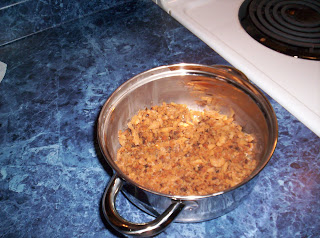 Which would, theoretically, be cracklin's, if it had any rind on it. As it is, she isn't sure it's worth doing anything with. Anyone have any suggestions?
Posted by the Bag Lady at 12:01 AM

That's quite the process.

Depending on what those "cracklins" taste like, I would probably use them to season a pot of either greens or peas/beans. But then, I cook like somebody's grandmother. Sweetie wants everything I cook to begin with me grabbing my grandmother's cast iron pot or skillet and melting the bacon grease.

Thanks for the show and tell!

Oh, yeah.
Excellent photo story.
Haven't a clue what to do with the leftovers.

Georgie - it was actually quite simple, once I knew what to do! :)

Messymimi - sounds like your Sweetie and the Rancher could be related....
:)

dfLeah - Thanks. I'll think of something to do with the cracklin's (even if it means feeding them to the dog....)

I found a recipe on food network for Craklin' Cornbread. It sounds pretty tasty and I'm sure you could just add them to your favorite cornbread recipe. (For which you've probably grown your own corn and ground it into meal!)

Thanks, Scrumpy! To be honest, I've never made cornbread. And I missed out on grinding the corn this year! :) But I will have to check out that recipe.

You are a wonder to behold.

Although I am a bit surprised you've never made corn bread. (Not that I have.) And you stopped me cold (no snow pun intended) when you mentioned grinding corn.

It's a good thing you've never tried to write a blog post about the things you can't do.. because I'm pretty sure that page would come up blank.

Luv me render indeed! I was thinking .. render moon hits your eye like a big pizza pie...

Wow...that's a long time to have to cook it?
I have no idea what to do with the leftovers. I imagine they'd go good in some molasses southern beans though...

Long process there. I wonder if you could use the left overs in your bird feeder? The cracklin corn bread sounds mighty good though :)

Please make me a pig candle.

[shoves in front of the dog and the birds] Cracklin and corn bread were made for each other, but if you don't want to try corn bread (and let's not get into the religious wars over the RIght Way to make corn bread just this minute) anything that you would flavor with bacon would like some cracklins. Bean soup, maybe. I was thinking about bean soup today....

dfTerrie - corn bread is not as big around here as it is in the southern States. Although a friend's mother made some once that was out of this world delish! I should try to get that recipe.

Geo - I'm thinking beans sound great! Must get to that sometime soon.

Mary Anne in Kentucky - okay, I won't feed them to the dog, although she spent almost the entire time I was rendering the fat pressed to my leg, hoping I'd drop something! Beans or corn bread - both sound pretty good!

Um suggestions? No. But I'm definitely fascinated! I never knew exactly how lard was made. I feel educated and that makes me happy:)

It makes me sad I have to keep telling you these things Baggy. There is only one answer to use up mysterious things. Booze. Mix up a nice batch of Cracklin' Martinis.

I will find a recipe link. After all, if you find it on the internet, it MUST be true.

Sparrow - you always have the answer!! :)

BL- I had to laugh, because my dogs were the first thing I thought of. Not for the whole pot, though, I'd have to roll them out to the yard.

But when your brilliant commenters started talking corn bread, you had me! Now I know that there are opinions and wars about cornbread, but if you do nothing but make it from a mix (scandal!), your life will be oodles better for not being cornbread-deprived.

I'm sure you'll find something creative to do with the leftovers!

Clare - I must find a recipe for cornbread. I have never been able to find cornbread mix in the grocery stores here.

Sagan - lard is good. Makes great pastry! I am rendering more lard - we are going to have a LOT of lard!!